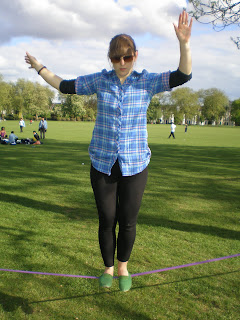 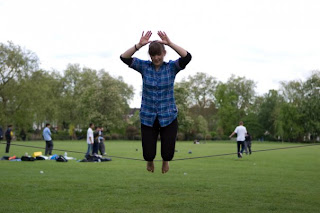 In February I headed to London to travel Europe. I took my slackline, of course, more as something to do in spare time. I spent 4 months in London, longer then expected (that's another story for another blog) and when I was bored I took my slackline to the Hampstead Heath park for fun. I actually met some of my good friends in that very park who happened to pass and began slacklining with me! Carlos and Julio from Spain, two very nice guys. I was only slacklining once or twice a week, sometimes less. Most people in London looked at me curiously, asked if I was in the circus, or wanted their children to try. Hardly anyone knew what the heck I was doing. These pictures are from slacklining in Queens Park.

In June I was fed up with London and feeling the travelling bug, so I took my line and huge crank with me to Germany, to visit a friend near Bremen. My friend was climbing at a place called the Bunker, and when I went with him and his family I was delighted to find that they had a slackline set up near the climbing wall! First thing I did before climbing was slackline. One of the climbing instructors, named Thomas Grahl, who was also slacking some saw me on the line and said he had never met someone slacking like me! I was surprised because I was definitely not the best out there. He offered me a chance to be on the local news with him and a couple other beginning slackliners later that week. I went and they took footage of us all slacklining. It was a report on Seiltanz, which is the german name for slacklining. It means "rope-dance" which I think is a silly name. I met a wonderful girl who was 12 years old and doing amazing slacklining. She was already walking, doing a lunge position, walking backwards, turning and learning to surf with my instruction. Along with her we went to the Radio Bremen studio to do a live show. They did not interview me because my German skills were not quite good enough (3 years of German lessons out the window) but we both walked on the line live on TV and they interviewed her.

Here is the link to the video:
http://www.radiobremen.de/fernsehen/buten_un_binnen/video7800-popup.html

It all seemed quite silly to me, especially since coming to Germany the last thing I expected was to be on the news. Anyways, a good memory of my slackline beginnings.
Posted by Faith Dickey at 6:04 PM