So, in between hitchhiking between Poland and Germany over and over again for festivals, I was spending my time mostly in Wroclaw, Poland. After the festival in Lublin I had a lovely two days at Janek's Grandmothers house in Krasnik, where she stuffed Janek, Damian and I full of home-cooked Polish food. It was great although I think I doubled my weight. During the day we set up a couple tree highlines in the woods behind the house. One was about 82ft (25m) long and 14 feet high (4 m.) I on-sighted this line one way, and walked it full tits later. It was interesting doing this line in the woods, where it was dark and mossy and mosquito's were biting you as you walked. The next day we set up a bit longer of a line in a different spot, same woods. This line was 105 ft (32m)long and 17ft high (5 m.)I did not on-sight the line, but sent it. We used my tubular threaded webbing for both these lines. It was really a lovely two days, almost relaxing compared to the usual fast paces slacklife I had been living. 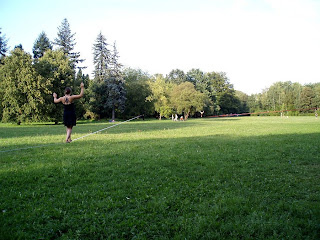 When in Wroclaw we went longlining as much as possible in the Parks, but usually I was only there for a few days at a time before hitchhiking off to some other adventure. The last longline session we had before our epic trip was one of the last we had in nice weather. This day we set up a 50 meter, a 100 meter and a 130 meter line in a park in Wroclaw. I was still struggling on long lines at this point, but I walked the 100 meter full tits, and only fell twice all day on it. I tried the 130 meter that day as well, but was not ready for such length apparently. I love longlines. They are very meditative for me, focusing on my breathing and trying to tune out my surroundings, to ignore the dogs barking or chasing frisbees, to tune out thoughts about the people around me or things I had on my mind earlier that day. The mosquitos were so bad that day we actually decided to leave. Jan Galek and Damian Czermak both onsited the 130 meter line, of course. They full manned it as well. You might imagine we all cheered and yelled congratulations to them, but its not quite like this when you slackline with those two. Basically at this point it is not surprising anymore when they do something amazing. So, as they returned from their sends it was more like "good job, dude." To both of them. It is still impressive, though. 130 meters is no short thing. Korny was struggling on the 100 meter, he really wanted to send it. He walked the 50, but was not quite satisfied with himself. For myself the 50 felt so easy after walking the 100, it was almost like a break for your legs and arms. 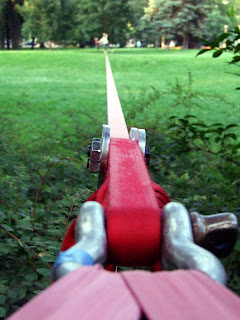 Slacklining with two of the next worlds-best (Damian and Janek) sure is helpful, I improved leaps and bounds since getting to know them. Kornie is pretty amazing too, in half a year he is right at my heels in slackline level, though I have been slacking twice as long as him. It is a great feeling to think how much I have improved since I came to Europe. I have now walked 457 foot (139 meter) longline, and am able to on-sight full man 328ft (100 meter) lines, not every time, but enough. Highlining is coming along as well. I have had the privilege to attempt a total of 9 highlines since July, and have sent 6 of them. It really began to feel like a European Slackline trip in the last four months.
Posted by Faith Dickey at 4:20 PM