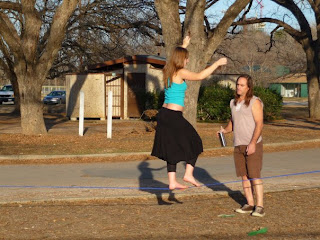 Where to begin? I suppose I should start at the beginning, my beginning with slackline. I touched on it briefly in my "about me" blurb, but here I can write a few more details. 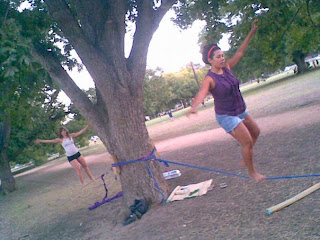 Summer of 2008 I spent most of my days at Barton Springs, in Austin, Texas. I tried a slackline that was set up between two huge ancient Pecan trees just outside the pool fence, some tubular webbing on a simple system, and with the hand of my friend I walked across. My first thought was "Screw this! I will never be able to walk on that alone!" And for a week I did not go near the line again. One day, however, I decided to try again, and I stepped up on the line alone. I paused for a moment in balance, then hopped off as I lost it. For some reason, determination began to creep into my veins, and then and there I decided I would try repeatedly until I could at least walk across. I begin going to the park almost everyday, and slacklining with two guys, named Chris Boswell and Zach Brebaugh, for 4 or 5 hours at a time. It was a great summer. With the consistency of practice I progressed quickly, and in two weeks I could walk smoothly. After a couple months I learned my first static tricks, as well as surfing. We set up a waterline over Barton creek, about 90 feet long, using Camalots on one side between some big boulders. We tensioned it with a makeshift pulley system, and the other side was wrapped around a tree. Just as the line was tensioned perfectly, and Boswell got ready to step on it, the cams ripped clean out of the boulders, shooting all the way across the creek. Luckily no kayaks were passing or else we might have killed the boaters. So, apparently we needed a new system. A week later we returned to the same spot with expansion bolts and a drill. We placed two lovely bolts in the rock, then set up the line again with daisy chains attached to the tensioning system. This worked best. It was so difficult walking on this line! Not only was it 50 feet longer then what I was used to, but the water moving by underneath sure played tricks on your eyes and your balance. A jogging trail ran right past our location, so people would stop and watch the happenings. Boswell of course could walk it and do some tricks. Many people and kids came to try it as well, starting from the side attached to the tree. Finally, on the 3rd time of setting up the line I walked it. Texas is a great place to do waterlines, because you usually get so hot and sweaty walking the line that falling in is a welcome refreshment. Boswell also happened to show me videos of the Yosemite Lost Arrow Spires Highline. After seeing this video, I immediately knew I wanted to do it. It seemed like something far and distant in the future though. 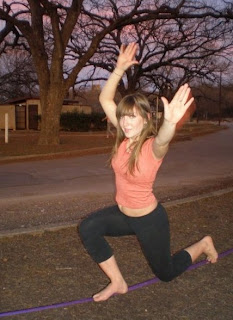 As summer came to a close (not the hot weather however) Boswell took off for burning man, along with his slackline. My new slackline friend, an awesome hippie-massage-therapist called TarZen, luckily bought his own line just in time. So, we began using his line, threaded tubular webbing from the local climbing shop REI. After a couple months I decided I wanted my own webbing, and with TarZens help we went to REI, I bought about 120 foot of tubular 1 inch webbing and smaller tubular to go inside. We took it to the fields behind Barton springs, stretched it out long, then sewed with floss the smaller webbing to a piece of wire, acting as a big needle. I secured the end of the 1 inch webbing, and TarZen worked the wire through the length of my line. It was beautiful! Oh my new webbing! Never walked on! As far as system, I went to Home Depot and bought a giant heavy utility crank. It apparently was a very strong ratchet, though it appeared a bit sketchy. For the next couple months setting up my line consisted of tying knots to the Mallion Rapide screw links, tensioning the line with the giant beast of a crank, then walking. This was not such a bad system, except that if I wanted to change the length of the line, I would have to beat the knots against trees, hit them with a hammer and then use my teeth to undo them. I knew no other way to do a slackline, but I was also weakening my line by tying so many knots. So, I began slacklining with my own line. Winter did come to Texas, and I took about a 4 month break from slacklining. When it warmed up I found time to set a line up about once a week, though I was hardly progressing.
Posted by Faith Dickey at 3:36 PM