Janek and I hitchhiked from Wrocław to Lądek Zdrój on September 20th, to do a slackline presentation for the Mountain and climbing film festival. Damian took a train, and since Kornie lost the coin toss he hitchhiked alone. Hitchhiking is so common in Poland, we sometimes would be dropped off and have to wait behind another hitchhiker until he was gone. We made it to the town very quickly, and waited around until Borys Bednarek (the guy who arranged our participation in the event) arrived. Our first thoughts were of course, where to set up a slackline. There was a stage, with a large metal frame around it for the purpose of attaching a tent or cover of some kind. So, we recieved permission to set up a line across the stage from a tree to this metal frame. 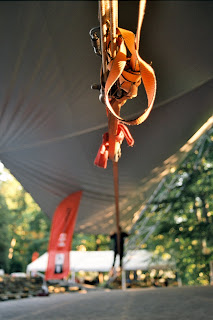 We used White Magic, and the line was about 25 meters long. On one side the stage ended, and it dropped off quite a ways down, so walking the line over this side was almost the feeling of a midline, since if you fell you could hit some stone steps or the benches and possible injure your ankle or legs.
Anyhow, we played around on this line for a while, then Szymon arrived and we rigged down and went to the guesthouse we were staying in. It was a large room with four couches, one on each wall, a table in the middle and a small bathroom with a defunct shower curtain that allowed water to get everywhere. After pizza for dinner, we just had to get a bottle of vodka (and another half bottle) chased by grapefruit juice. Damn Polish guys! It is not so easy to keep up with them and their vodka drinking abilities. We watched a great film called "The Boat That Rocked." By the time we all passed out on our designated couches (and Szymon on the floor) it was fairly late and we were all fairly drunk.

The next day the guys set up a tree highline in a lovely park area next to the Festival. 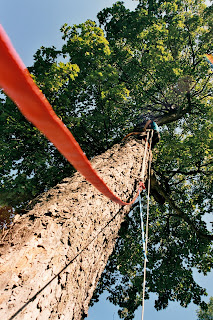 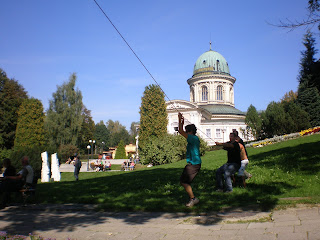 It was between two great old trees, quite high. There was no backup. I still had my cast on and was too nervous about using my wrist so I decided against trying the line. Janek and Damian both walked it, Kornie walked most of it and I sat on the grass below feeling a bit kaputt.

After this we went to do our presentation. We should have practiced at least once to see that everything went smoothly, however being the slackers we are we just assumed it would go easy peasy, however it turned out that the computer hooked up to the projector was a Mac, and I was the only one with experience in Macs, however the computer was all in Polish and so my knowledge was useless. After much changing of cables and eventually entire laptop we were able to begin. Janek and Damian started, talking about the history of slacklining etcetera. Between the four of us we took turns taking the front and presenting our information. They were speaking in Polish, so when I talked about my own personal slackline experiences Damian translated. We showed pictures for each topic, such as the basics of slacklining, the different types of the sport (trickline, longline, highline, waterline, and so.) gear, rigging, and a few other things. We had two hours, which was a long time to keep a group engaged, but overall I think our presentation went great.

Afterwards we set up a long rodeo line, underneath the tree highline. It was nighttime so the only light available was the orange-yellow glow from the park lamps. This made the line even more difficult. I was starting from chongo, since to create a rodeo line so long we had to set the rope high up. At one point I fell off and landed quite hard on my ass, which hurt the next few days. Rodeos are good conditioning! The are on one hand similar to longlines, in that you use much of the same muscles trying to steady the line, however they feel much different and to me more difficult than a longline. 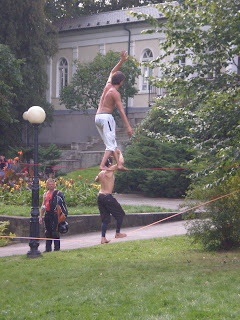 That night there was a concert on the stage our slackline had been on, by a Czech band called Minus 123 Minutes. They were great! I am pretty certain the entire town of Lądek Zdrój was in the arena. We sat in front drinking beer and watching the end of the concert, and after every "last song" the audience would scream "Encore!!" (in polish of course) and the band would return and sing another. Unfortunately the very excited youth of the audience all ran down and lined up to dance in front of the stage, which happened to be right in front of myself, Kornie, Janek, Damian and Szymon. Annoying, but funny to watch. These people were dancing very strangely, like drunk hippies at a reggae concert, yet there was no reggae and they did not look like hippies. 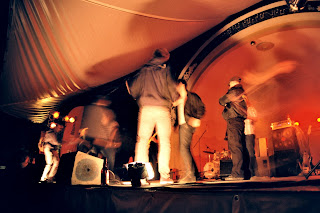 There was a very serious looking group of security guys next to the stage, whose faces showed that they wanted the damn concert to end. This lovely group of dancers then ran onto the stage for the last song, and the serious looking policja followed to escort them down. The singer of the band said "its ok its ok" and so the strange dancing drunk kids stayed. At least then our view was clear.

Afterwards there was more vodka and ŻUBR and grapefruit juice in our room, with four people who I did not know. At some point I was feeling pretty wasted, and we put on the movie Monsters vs. Aliens and I passed out in the beginning. Kornie, who is such a great friend, woke me up with a wet willy in my ear. I remember the first one, however apparently there were several more during the duration of the movie but I dont remember.

The next day we woke up and left the room, kindly leaving a massive pile of beer and vodka bottles, 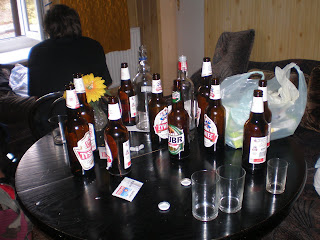 all the boys took shits in the bathroom then voluntarily told me all about it ("Too Far!") Then we went to the tree highline and set up a couple more lines, the rodeo again, and a quite high up slackline (to keep the children off we had to set it up so high.)There were way too many people there, but other then that the weather was lovely. We took some nice raunchy pictures of all our gear laid out and ready. 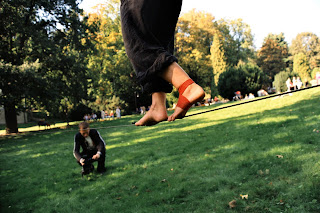 I met Damian's mother, and of course added her to the list of peoples parents I have accidentally cursed at. They said, "Faith! Say what you know in Polish!" so I said, "Słonko Swieci, ja pierdolę!" Which apparently means "the sun is shining, Fuck yes!" So, now as a rule the only thing I will say to anyone in polish is hello. 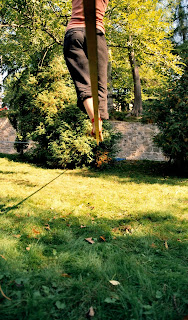 So, the trip went well, while we ate too much pizza and drank too much vodka and spent all the money we earned as we earned it, really it was a great time. It was also really great to have the entire Everyday Average Normal Crew together, all at the same time, slacklining and acting like retards. And doing a presentation bringing together everyones knowledge and oppinions was lovely.
So, on to the next adventure!
Pictures in this blog were taken by myself, the beautiful ones by Damian Czermac and some by Michał Korniewicz. 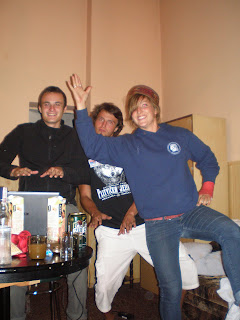 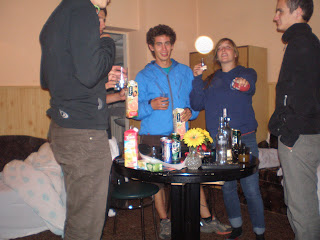