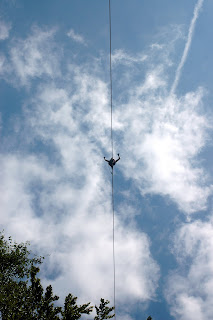 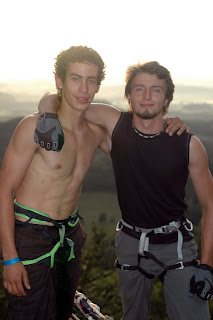 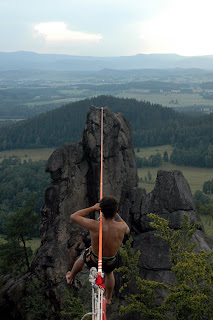 Once back in Poland, Janek, Kornie and I decided to take a trip for a couple of days down to Sokoliki. It is a beautiful area south of Wroclaw well known for its climbing. We went specifically to set up a highline in a spot that Janek had seen on a previous trip there. We hitchhiked there, so by the time we made it it was afternoon. We first went to the campsite, hung out for a bit, then hiked up to the location. One of Janeks czech friends had already created a name for the location: Wide Space. One end of the anchor would be on a giant boulder sitting atop the rock formation, and the other side was a tall slender rock pillar. The anchors were lovely, secure and not difficult to rig. Janek and Kornie tightened the line (we used Kornie's White Magic flat webbing)and then taped the backup. It was already growing darker, and because Kornie had to hitchhike back to Wroclaw that night he was first to go. He tried several times, with good energy, however He walked halfway on best attempt. He was pressed for time so it was unfortunately not enough time to walk all the way. Janek and I both thought it was possible for him. He took off, and I went second for a change ( I have grown accustomed to being last.) On my first try, I stood fom a chongo, took a step and fell. Caught the line! On the second try, the steel ring at the end of my leash was stuck on some tape around the line, so I felt resistance trying to walk. My reaction of course was to panic, and Janek calmly told me I should just sit down, pull the ring over the tape and start again. I followed his instruction, and on this try I walked the line all the way to the other side. I used my usual tactics of saying "Breathe...control...breathe...control..." When I reached the other side I had a wonderful satisfied feeling. Much adrenaline, of course. It was great to walk towards this side with the entire view of down the mountain, the fields and farms, and the horizon and dark hills in front. I sat on the pillar and soaked in my surroundings, but Janek was on the other side waiting for his walk so I had to come back. I find this problem in most highlines I walk, one way is a great feeling and I almost dont want to return in case I will ruin the feeling of sending it. However this time I successfully walked back and said happily "get me the fuck off this line!" But it was my first send of a True highline; not a tree highline like the ones I sent in the past. 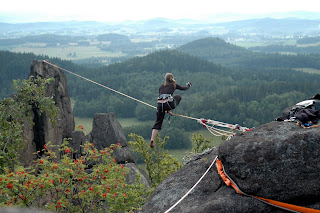 Janek took his turn, not surprisingly walking on sight full man (as I have become used to highlining with him.) and when he returned we both agreed it was a beautiful highline. Maybe even the perfect highline. It was about 26 meters, slightly inclined on the return, but with lovely exposure. The only downfall was the wind, however this is an almost unavoidable occurrence when highlining in the hills. 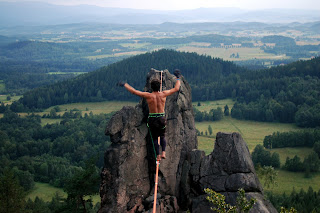 We camped there that night, sleeping on picnic benches in a shelter, meanwhile a huge rainstorm came dumping buckets on everything. There was a school group of kids from Belgium, and when they heard Janek and I speaking english they asked if we were from England. They were amused at my reply that I was in fact from Texas. Nice counselor's gave us watermelon. We ate a lovely dinner of Kielbasa sausage roasted over an open fire, and pasztet of course.

The next morning we woke up ate something and headed up to the highline for another walk and then down rigging. I went first, and Janek ran around to take some photos. I had a much harder time coming back from the pillar. There was strong winds whipping me in the face and adding to my already nervous disposition that day. I stood from the chongo and took a few steps over and over and over. I fell about 7 or 8 times trying to return. Janek had climbed to the top of the small mountain and up a giant metal cross to get a good photo from a distance, and I was unable to walk! Very disappointing. I was actually on the verge of tears. There were two guys climbing down below, and they were speaking encouraging words in response to my profanities that I screamed to the line and the rocks and the wind. Finally, after walking over halfway and falling just five meters or so before the end, I decided my thighs had taken enough beating and I crawled back. Talk about depressed! I could not fathom why on the first day I was able to walk the line with virtually no problem and then this day had so much trouble. Anyhow, I was happy to have been first ascent, and walked the line full man before leaving. Janek came up again and walked several times, performing some impressive tricks and all the while listening to his traditional drum and bass. We both wished Kornie had stayed so that he could enjoy the line with us, but agreed we could always return and set it up again in the near future. 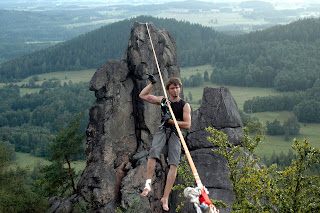 So, it was my first real send of a real highline. Felt good. 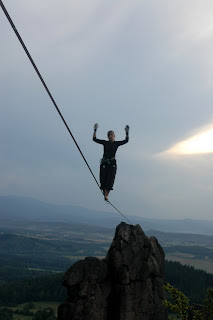 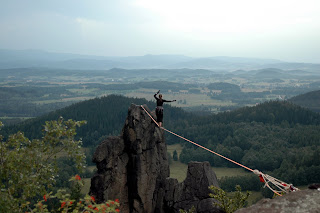