The night before we headed to Hejszowina for highlining I barely slept. I was actually working on the blog almost the entire night. I also skyped my mother and sister back home briefly, was great to hear from them. This night was also the first time I took off my cast from my broken wrist. At 5 am I met Damian and Janek at the train station in Wrocław, made it there all by myself! I am usually lost everywhere I go alone, so this is a big accomplishment for me. They both slept on the way, however I could not get a wink of shut eye for some reason. It could possibly be due to the caffiene in my system at the time. After the train we took a bus the rest of the way. It was raining and cold in Hejszowina when we arrived. 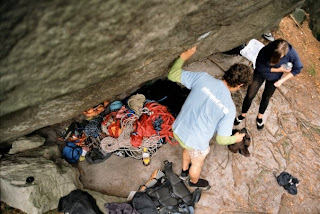 The place is basically a tiny town at the base of a big rock peak. I was feeling like shit and slightly sick from lack of sleep, but you cannot let this interfere with the opportunity to highline. Us three hiked up the infinite amount of stairs to get to the top of the rock, stopping just before the summit to get off the stairs and leave our belongings under an overhanging rock. This rock would be our "Hotel Bel Canto" for the next night.

After eating a small snack we headed up the rest of the way to rig some highlines. Damian and Janek started rigging, and while usually I would be over their shoulders trying to learn the details of rigging highlines, this day I felt pretty awful and cold. I suppose I was feeling pretty sorry or myself, with my wrist still a bit in pain, no sleep and the wet and cold of my surroundings. Despite all my woes, I could recognize how beautiful the location was we were in. The hills in the distance were almost invisible due to the low hanging clouds, gray and misty. It almost felt as if we were floating on a rock in the clouds themselves.

The anchors for the highline Windy Gap were each attached to the viewpoints atop the peak. On both sides we used the rails around the viewpoints to hold the anchors, although one side was also attached to a big boulder. We put some carpeting underneith the gear so that it did not rub against the stone too much. On Little Wind the rails were used as well, though one side was attached only to a boulder.

We first rigged only Windy Gap, which was 33 meters(108 feet)and Damian and Janek both onsighted it. 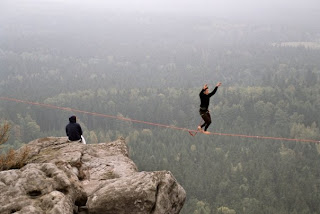 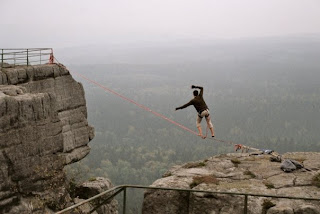 When it was my turn I began to feel my usual nervousness, dread and excitement. The first attempt I took one step and fell off. Ok, not so nice a feeling. Climbing back onto the line was difficult as any pressure on my wrist was still quite painful, but eventually I settled into a chongo again. I asked Janek and Damian to sing to me, hoping their singing would make the situation less stressful for me, maybe even funny. It sure was half-assed singing, which eventually trailed off and I was left once again with only the sound of my heavy breathing, thumping heart and the murmurs of some tourists on the viewpoints. 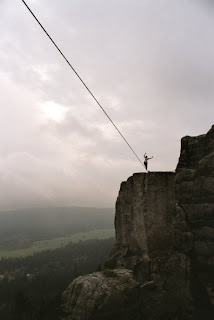 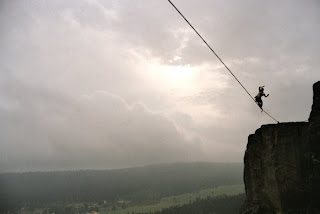 I walked it. Second try, I walked my longest highline yet. I talked myself across the line, made it, then sat for a minute to calm down, and walked back. 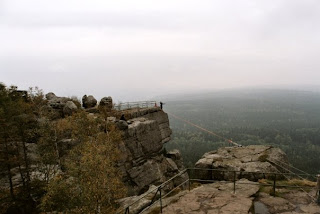 It felt nice on the way back, I was more confident, however just at the end, 1 step before I was to sit down and finish my send, I fell! What the heck?!?! I was so pissed off at myself, however I walked it 1.5 man. I guess I sent it one way for sure, but I cannot count that as a full man.

That day after walking I did some exploring atop the rock we were on. It is a lovely peak, full of toppled boulders coated in green moss, with passageways here and there that have been there since before WWII. There are even engravings of men's initials from the early 1800's. 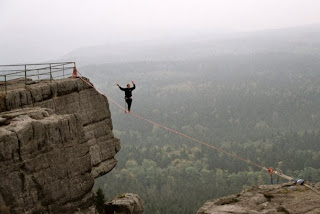 That night we returned to Hotel Bel Canto, ate sandwiches and drank vodka shots out of the bottom of a waterbottle, cut in half. I was naturally wasted by the time we all went to sleep. We slept in a row, me in between Janek and Damian. Unfortunately we all slept on a slant, so every hour I would wake up because I had slid down my sleeping mat onto the wet ground. Then I would have to inch up the mat in my sleeping bag like some giant fat worm. Good times. On top of this predicament, I was completely congested so in the middle of the night would wake up and use a fern or dead leaf to blow my nose. Yes, I am sexy.

The next morning we headed up to walk some highlines. We rigged Little Wind, which is the 13 meter brother of Windy Gap. It appeared much shorter then the 33 meter, especially after my fight with it. I felt no pressure walking Little Wind, and in that zone I Full manned it On sight. It would have been a perfect first highline; short, exposed, and only about 30 meters (100 feet) high. Its big brother is quite a bit longer and another 10 meters higher. That day the weather treated us not as kindly as we would have liked, and it drizzled for hours on end and was cold. I had to stash the bags and extra gear under an overhanging rock, and I lay layered in the guys jackets while they walked. I got back on the Windy Gap again this day, though I was feeling reluctant because of the cold. On top of this, with some lines, one send is enough. I cant really explain this feeling, yet there have been at least three highlines in my list that I fought on and sent and was happy to leave in good spirits about. When I got back on the Windy Gap, it was true to its name and the line tattered along to its own rhythm. I fell about 6 times before finally walking across for my second send. Frustrated, I sat near the second anchor and took a breather then started to walk back across. I sent it going back with more ease, and after that decided to leave it for that trip. 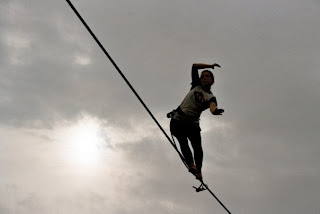 Damian took some beautiful photos of me on the Little Wind and Janek on the Windy Gap at the same time. The energy of having multiple people walking lines at the same time exudes the surroundings, it is a fantastic experience. In this case neither of us fell, however in some cases hearing another highliner fall on the line can be distracting. This of course can be tuned out when you are in the zone. 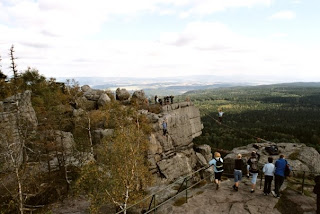 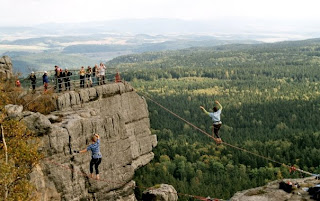 We stayed one more night in Hotel Bel Canto, then the next day we rigged down the lines and headed back on the lovely bus ride back to civilization. It was a long journey back, and the warmth of Janeks home and his mothers fresh polish cakes was a welcomed environment. I was happy to leave with two more sends and at that point my longest Highline so far.

I would like to thank Damian Czermak for the photos from this trip. 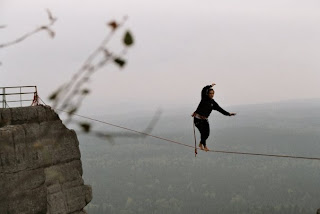 Posted by Faith Dickey at 7:46 AM No comments: