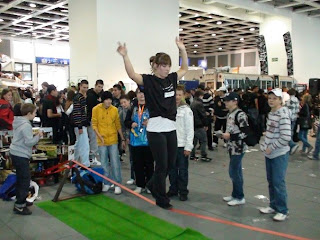 While still in Wroclaw with the Polish guys, staying at Janek's house, I received and email from Slackline Freewalker stating that they urgently needed someone to work for them in the next couple weeks in Berlin, at something called the YOU Fair. I did not know many of the details, however I was strapped for cash and it sounded like a good deal. After some discussion with Janek, we decided we would take trains to Berlin and stay at Iana's house, the women who co-owns the Skatehalle in the RAW Galänder. We set out, and I seperated from Janek to travel all the way across Berlin for this Fair. I arrived at the appropriate Train Station, however my phone was out of minutes and I was unable to contact the manager of Freewalker to let him know I was there! After much waiting and exploring I walked about 2 kilometers to finally reach the fair. I will add that this center was massive, and it took another hour to find the entrance and get in, as my ticket was inside at the booth where I was to work. So, after a clusterfuck of a day I finally made it to the Freewalker area. I was sorry to be late, however the day just had not gone as planned. 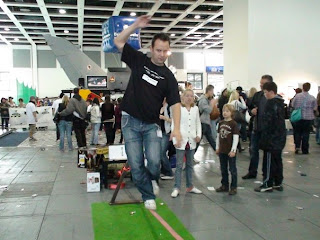 Naturally I was tired as balls from the overnight journey from Poland, and yet I proceeded to slackline on the freewalker setup for the next 6 hours. It was a short set up since there was not much room in the building for a slackline. Freewalkers set up involves the line, a ratchet, and two A-frames. 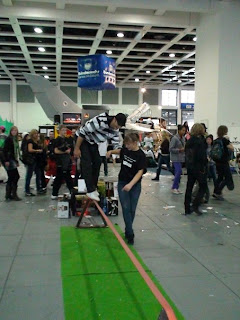 The webbing is wider than the usual, being about 2 inches. It took some getting used to, however after a couple hours I was practising my lemur jumps and jumps and some static tricks. The fair was oriented for youths, primarily highschoolers. I was assuming I would be surrounded by Children. Boy, was I wrong. Highschoolers in Berlin are much harder to handle then a bunch of tots. 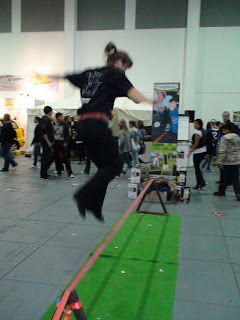 There were so many arrogant guys who had no respect for the set up, would jump over it and on it when others were trying to walk, asked me for kisses etc. I was so ready to send these kids to boot camp at the end of the day. 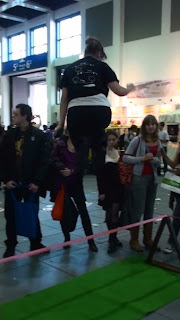 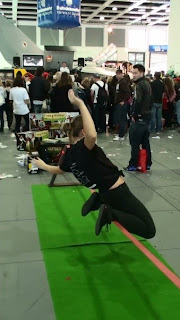 There were a few who knew what slackline was, some who owned their own, but generally it was a new thing to most kids there. What made the scenario worth my while was when a kid was genuinely interested. I was basically there to give an example of what one can do on the Freewalker slackline after some practice. Who knew slacklining on a small line can wear you out!? By the end of the day my feet were throbbing and my legs were sore as heck. 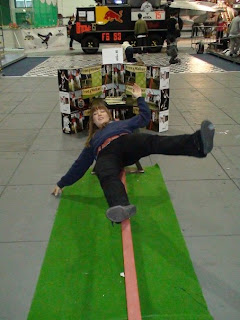 I was so happy to return to Iana's, hang out with her and Tomek 'Soya,' and the dogs and of course getting some nice warm sleep next to Janek. The nights were filled with Beer and movies and rest. 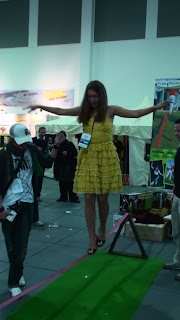 Early the next morning I had to head back to the YOU fair. The best part about this fair was getting some interesting people on the slackline. Girls in highheels, sexy nurses and the Parkour guys! 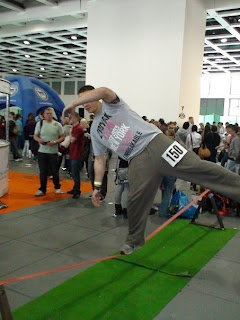 After three days of the YOU fair, I was exhausted. 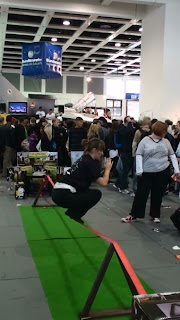 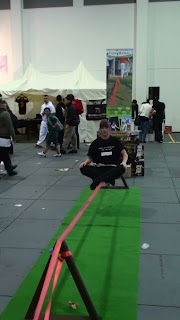 It was a great job, to slackline, however being surrounded by thousands and thousands of teenagers and slacklining virtually non-stop for 7 hours a day is tough stuff! What worked out great was that after the job I was able to negotiate with Freewalker and they ended up agreeing to sponsor my plane ticket for the US tour. 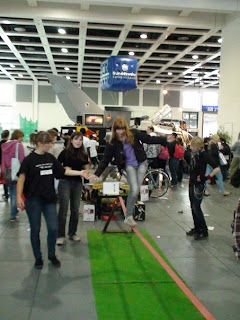 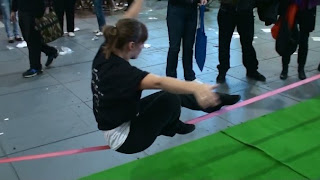 Janek and I met up with Jordan Tybon, who was still living in Berlin, and we had the amazing opportunity to get on an olympic trampoline in one of the climbing gyms. Two very nice guys helped us out, Andreas and Mattias. We arrived at the gym quite late, and there was one other guy who was extremely good on the trampoline who did the spotting for our backflips. So, after a few hours I successfully did a few backflips with a spotter. He suggested I wait to try a backflip on the slackline until I had a bit more practice (with no spotter) on the trampoline. I have to say the trampoline is quite addictive. Once on it, you don't want to come off!

The following day we went to a Volkspark Friedrichshain and set up a 140 meter longline. We used CT pulleys for the system. The location was unique, because the anchors were trees, however they were seperated by a huge ditch. This was a Long-mid-line. The first two meters were just about a meter and a half high, then it just sloped down and dropped off. Even though I had walked just a meter shy of this line previously in Wroclaw, I was unable to even come halfway on this line. The wind was so strong that day (did I mention it was cold as well?) that the line was flopping a meter on its own! When sitting on the line to get into a chongo, your body was constantly bouncing up and down with the line, despite being so close to the anchor. Janek walked three quarters of the way, and he had the best try. Mattias came and had a few good tries, and Jordan and I fought a bit but did not make it so far. Seeing Janek fall from the center was a bit nerve racking since he was so high off the ground, but the pit had sand in it which broke his fall somewhat. I was relieved to unrig and get back to a warm place.

This pretty much wraps up my trip to Berlin, so Janek and I headed back on the lovely train system. We were stuck at the edge of Germany overnight, where our Train stopped a couple kilometers away from the Train Station over the border. A very nice Polish woman gave me a ride in her car to the other station, and Janek rode my bike there in the cold icy weather. She was a very nice woman, and we conversed in german the whole way there. Janek and I ate some healthy McDonalds meals as we spent the night in the un-heated station, listening to some Polish business man snore away in his little red wind jacket atop his briefcase. We slept a bit on two benches pushed together, and early in the morning headed the rest of the way to Wroclaw.
Posted by Faith Dickey at 9:12 PM