Once back in Wroclaw, I went with Janek, Damian and Kornie to get their visas to go to the US. I just went because I had never seen Krakow and heard it was a beautiful city. 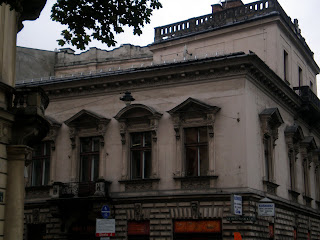 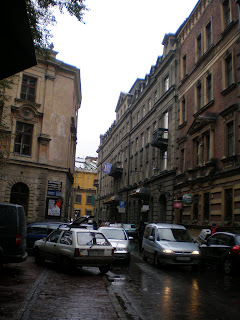 We went early on Polish train, and arrived so early we had much time to kill before the guys appointments. It is beautiful as they say, with old buildings kept in great shape, all colorful and built in polish style. The main square is huge, big enough for a longline (unfortunately there are too many tourists) and it has a large beautiful old church called St. Mary's in the center. There is even a man playing trumpet in this tower of the Church, the Cracovian Hymn four times each hour. The city used to be the capitol until they switched it to Warsaw. There was one street I tried to pronounce, and I cannot remember the correct spelling but it sounded like "shityourpanska." This was a good laugh for Kornie and I.

Since we had time to kill we found a coffee shop and camped out until the guys headed out for their Visa meetings. I stayed behind, thinking it would not take too long. Coffee disappeared, hours passed, people came and went, I heard many English speakers there, and eventually the guys returned. Since they were done with their visa stuff they wanted to return to Wroclaw. I had paid for a ticket and came to see Krakow, so Janek and I stayed behind to find something to do.

We first went searching for a slackline location. The only spot within walking distance from the main square and the station was a small beautiful park covered in dog shit. We set up a sort of long line, something around 45 meters. 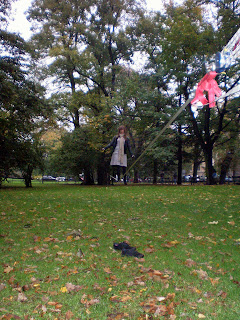 It was a bit cold and wet, so taking off our shoes was not a pleasant thing. I had unfortunately worn tights, and therefore could not be entirely barefoot. It was a slippery experience! 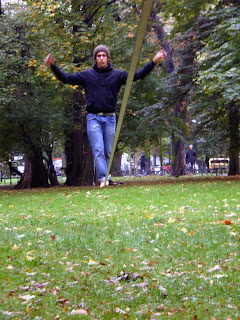 Janek did various tricks, surfed and such. 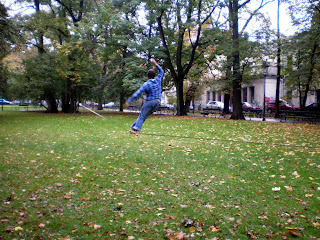 I primarily worked on laps with no hands. But doing laps on this line felt great, and passers bye would stop and watch curiously. 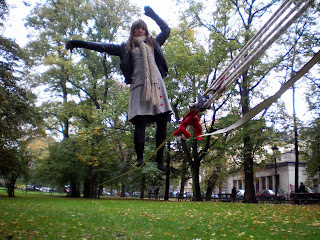 One woman with two young children came and spoke English very well, and asked all sorts of questions. She was very kind, and never once asked something silly about circus' or back flips. I wrote some info for her before she left to google, as her young son was interested in slacklining. 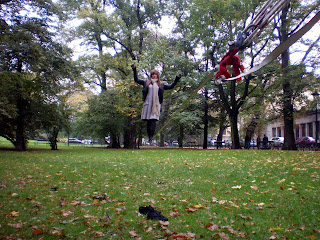 After we were cold and had worked up a massive hunger, we rigged down the white magic line and packed the pulleys and went to find some food. One huge pizza later we were on the train back to Wroclaw. I was somewhat satisfied with what I had seen in Krakow, and besides I figure I can always return.
Posted by Faith Dickey at 12:51 AM