After returning to Wroclaw and finalizing the trip to the US, I realized I was going to have to return to London to visit a few important friends, take care of some police business (will explain later) and gather some things I left there in the possession of my dear friend Sue. 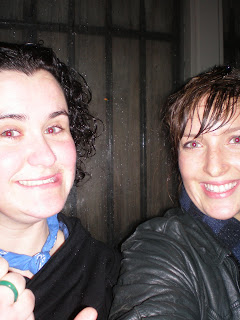 A big part of me wanted to stay in Wroclaw and continue the lovely routine of staying up late, sleeping in, eating polish food, going to the opera, walking around the historic center of town in the cold nights, and breaking chains trying to walk on them with Janek, but I needed to go. I booked my flight to London and headed out. The way to the airport was one of those times you think the cosmos is working against you. First, I missed my bus to the airport by 5 minutes, and they only came every half hour. The next obstacle was a ticket controller, halfway to the airport. I had to get off the bus at some stop I could not pronounce. I called Janek and got a taxi number. I called the taxi and tried to pronounce the name of the stop, they understood. Finally, I arrived at the airport half an hour before my plane would depart. I waited in line, got to security, then they informed me that I needed to go back to the front of the airport and receive some stamp. So, after this I waited in line, went through security (they pulled me aside to search my pockets.) Then, right before I made it to my gate I came to Customs. Since I had spent the last few months hitchhiking I had no stamps in my passport except from Bremen, dated June 10th. I was leaving Poland in October, and according to them I was only allowed on mainland Europe for a total of three months at any given time. They informed me that it was a serious offence and I could be denied access to Europe in the future. I was in the shitter, and did not know how to get out of it. Eventually, after discussion among the officers, they decided to let me out of Poland and just told me to get stamps even when hitchhiking. Lucky again. The best was that my plane was late, and therefore I made it onto the flight. I arrived at the gate half an hour after it was supposed to close.

Ok, so made it to London, Irish Sue gathered me from Victoria Station and took me to her home in Brixton. This area is famous for being dangerous, however it is quite a cool and cultural place. There is a huge Reggae and Carribbean influence there, as well as some hippies and indie folk. Sue and I started our rampage of London, usually staying out all night and arriving back at her home in the early morning as the sun came up. We also managed to get a 1 pound sandwich from either Tesco's or Sainsburys to fix that hungover hunger. I hung out with some friends I had not seen since I took off dirtbagging, went to a couple lame houseparties, and unfortunately only slacklined one time.

The parkour guys I had met in Berlin at the YOU fair happened to be in London at this time, and one of them had a slackline. We met at Waterloo Station to find a spot to slack, it was nighttime but the city is quite lit up. We first set up on the sidewalk lining the Thames, between two trees with a simple system. As soon as it was rigged, security came by and informed us that we could not put our line up there as it was private property. I asked the classic question of "Are you sure? Have they told you to prevent slackliners from slacklining here?" But sometimes you can see that resistance is futile. The parkour team wanted to argue on, however eventually it was clear that arguing was just using precious time to slack. 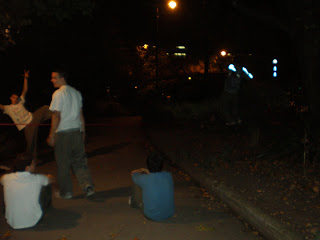 We went over the bridge and began searching for a spot, however it was slim pickings. Finally we ended up hopping a fence into a closed park, and setting up a line over the walkway between two trees. 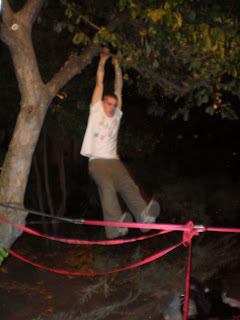 It was not the best feeling line, just because of the rigging, I only walked a few times. The Parkour guys practiced swinging from the tree onto the line, then from tree to line then onto the lamp post which they would spiral around. This appeared to be the beginnings of a new sport: Slackline meets Parkour. Slackour! The new sport! 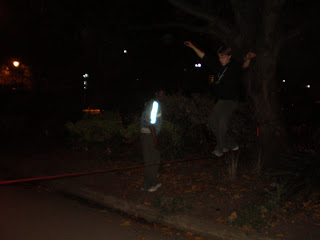 The last night I was in London Kieron (Parkour dude) and I hung out on Halloween and went on a balance rampage around southeast London, balancing on poles, rails and walls. It was fun, but not quite slackline.

So, after my trip to London I vowed to stay in touch with these guys and set some shit up when I make it back to Europe.

Then I returned to Wroclaw with no problem from customs to prepare for the US.
Posted by Faith Dickey at 12:08 AM