So, we finally made it to Vegas. The city you always hear so much about! It was night when we arrived, and the temperature was a welcomed 55 degrees - this was heaven compared to the drive through Utah. The city is all lights and people and cars and business! There are casinos inspired by Paris, NYC, Rome, Venice, Ireland...you don't need to travel all the world, just go to Vegas ;)

We decided to find a cheap hotel and split the price amongst the 6 of us. Somehow, probably with Kornie's influence we decided on the Hooter's Hotel Vegas. Everyone hung out in the parking garage while Jordan and I entered the Casino part of the hotel looking so out of place, two dirtbags coming to rent a room. The room was only about $40 total for a night, not too bad split between 6 people. So, we took our bags up to the room, then came down to sneak all the other guys in. So, imagine a crowd of dirty people with huge hiking backpacks passing through a casino with Hooter's girls and people gambling. It was some scene. 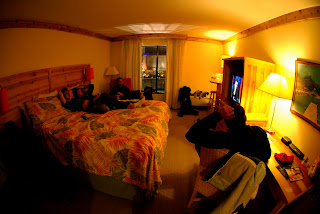 Inside the room there was some soft-porn magazine with Hooter's Girls, a giant king sized bed, and plenty of room for dirtbags to sleep on the floor. 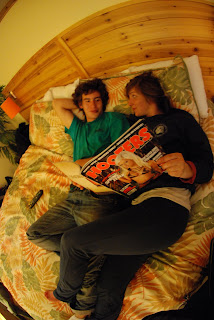 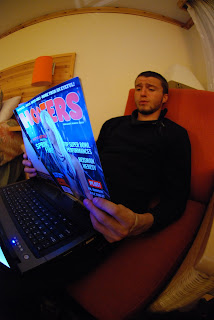 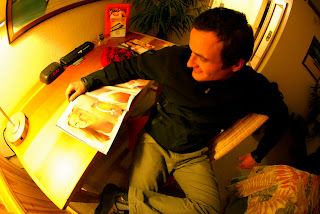 The guys all wanted to go out and slackline, but Janek and I ended up staying at the room to shower and take a nap. 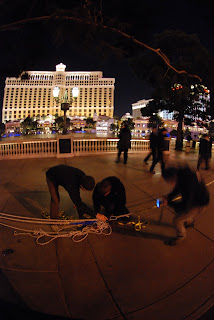 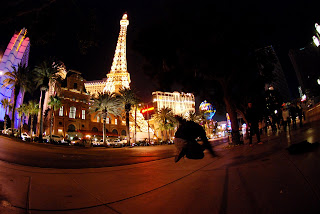 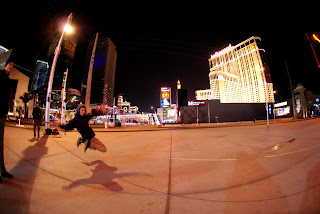 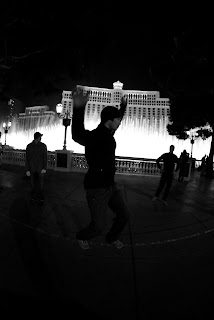 The next day we packed our stuff up and checked out, then went to slackline a bit before driving to LA. We first went in front of a Harley Davidson Motorcycles Cafe, since the night before the manager there had no problem with the guys slacklining out front. However, this day they told us to leave, as it was a matter of LIABILITY. Slackliners favorite word. So, we walked for over an hour looking for a good spot, finally setting up next to the fountains in front of the Bellagio. We slacked for maybe half an hour on a couple short short tricklines, then the security came and gave us the same Liability bullshit. So, apparently slacking in Vegas is difficult! We saw the fountain show, synced with the American Anthem blasting loudly. Oy, Vegas.

Finally, we all packed in our cars and headed for LA to visit Rick and Maria from Slackline Brothers Inc.

The drive to LA was not too bad, much shorter then previous drives, and warmer. 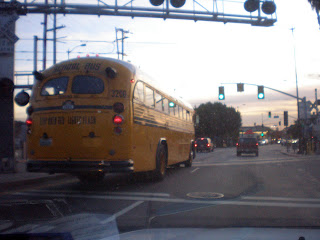 We dealt with the usual traffic, but eventually found ourselves at the bottom of the biggest hill in LA, on which Maria lived. I wondered if my car would make it. So, I told everyone to prepare themselves, then started driving up the hill. This was no small one! Halfway up my car just stopped moving forward. Shit. So, we reversed down to try once again. This time I gave myself a running start, gaining speed before pushing up the hill, and we made it! Barely. I pulled into the parking spot and we all headed towards Maria's house; a beautiful restored cabin made from redwood.

LA was an amazing rest week for us. We spent our days lounging around the house, hanging out with Maria and/or Rick, talking about Slacklife, cooking dinners for the whole group each night, longlining in Sycamore Park nearby... 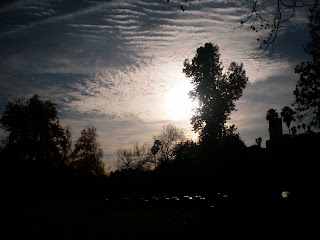 ...and going to Maria's SBI workshop to see how she does it all. I also finally recieved the clothing from my sponsor Freewalker, and the boy's were happy to model them for me: 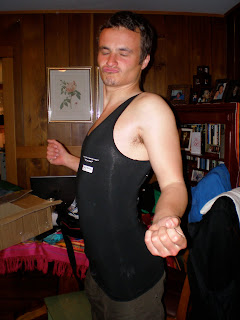 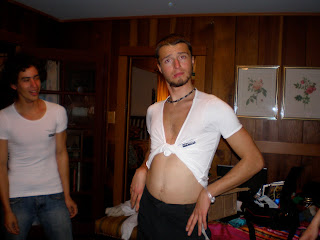 We also went to Santa Monica Beach to slackline in the classic spot, muscle beach I believe? 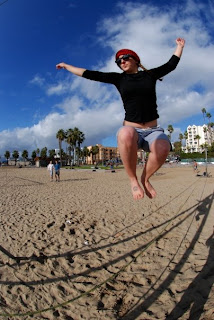 There were some other old school slackliners setting up their tubular lines on simple system, while we used a Gibbon 1" with pulleys and Free Feet Tubular threaded. 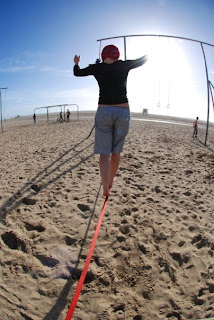 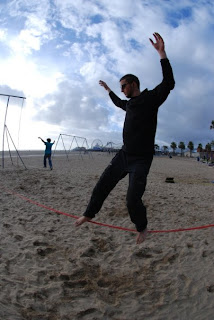 It was fun. Jordan practiced back flips over the sand. 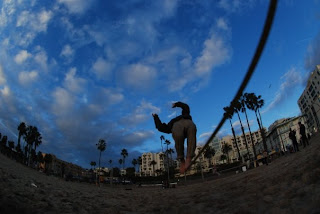 I tried my first butt bounce (after 15 minutes of standing there too afraid) and Jordan took some amazing photos of everyone. 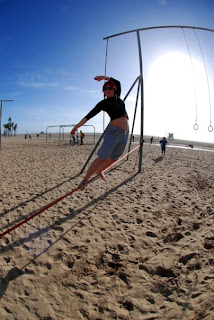 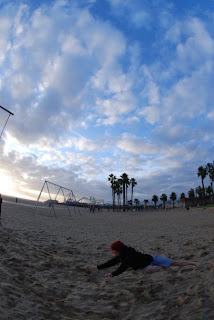 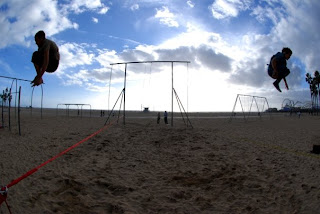 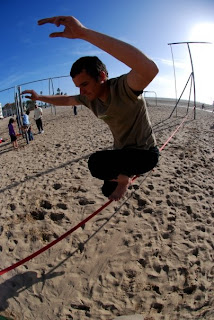 It was a great day. There were also rings there, and some gymnists came to train, doing amazing moves on the rings. Traffic was a pain on the way back, but it is LA. 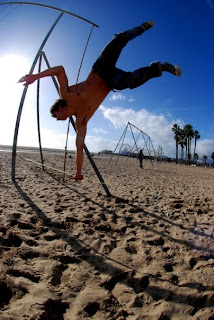 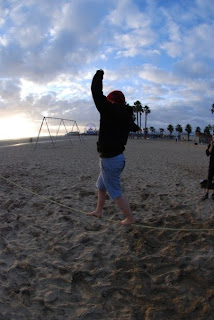 One terrible occurrence in LA was the attack of the stomach flu! Kornie had it first, and for two days he did nothing but throw up, shit and sleep. Poor guy. A couple days after he had it, Jordan caught it, and went through the same spell. Maria caught it last, right before we left for Joshua Tree, poor woman! 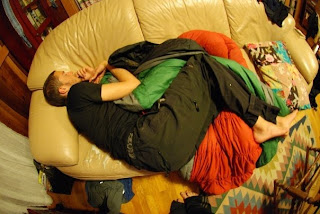 In the yard at Rick and Maria's they have a great slackline rigged up, tubular on A-frames. It was nice to go do laps whenever we felt like it.

The days we spent Longlining were lovely. We rigged a 100m line with White magic, and everyone had some great walks. 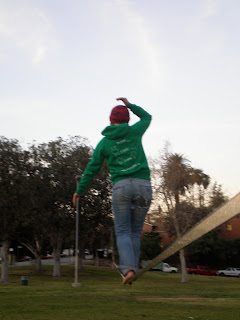 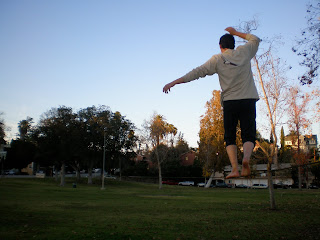 I on sighted the line, and felt quite pleased, and it felt good to longline again after so many highlines. It is a more relaxing physical activity then highlining, especially in the mental aspect. Janek also invented a new bit of slackline technology: The Missing Link! 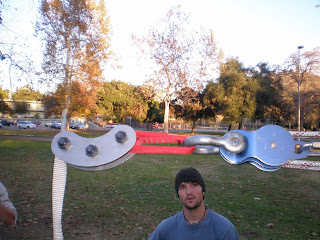 It is a piece of webbing sewn with loops on each side, that winds around 3 times to form a link between a Slack Banana and a shackle. This is great. Maria had Kornie design a package and plans to sell them on her site. The Missing Link will make using rigging even simpler and cleaner. So, we tested it on our longline, and it worked beautifully. 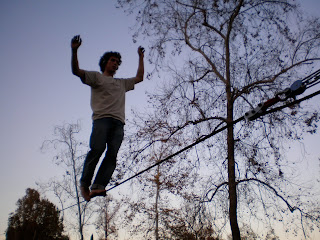 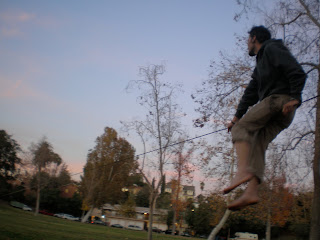 Finally, we were ready to head to Joshua Tree, the desert a few hours south of LA. We stopped at Jordan's Aunts house on the way and they fed us a great dinner of Enchiladas and burritos, they had a beautiful house in the mountains. We drank wine, chatted, then slept one night before finishing the drive. The next morning the guys played some basketball on a very small child's hoop, and we packed up and began our drive to the last part of the US Highline Trip: Joshua Tree.

Thank you again to Jordan Tybon for the photo's from Santa Monica Beach and more!
Posted by Faith Dickey at 10:14 AM