In June we had the wonderful opportunity to travel in the Gibbon van to Millau, France to attend the Vibram Natural Games. We had organized with Slack.fr to do a slideshow-presentation about our Slacklife.
We spent an amazing week in the sun enjoying highlines (that were rigged by Slack.fr-thank you!) attempting the then-world record length highline, meeting other European and Brazilian highliners, eating baguettes, camping next to a river, and having fun!


Here we did a slideshow presented in front of thousands of french attendees, put together by Jordan Tybon. We had his sister Joelle come and translate our presentation into french for us! We were all nervous as it was our biggest presentation at that time, but I think we ended up doing well. 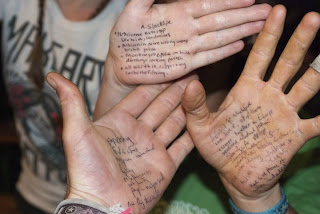 photo by Jordan Tybon
We also raged on some highlines, which were already rigged when we arrived (Thanks!) It was beautiful sunny weather, and we met many highliners from France and other countries. I also met some female highliners there, Ingrid and Jelena, whom I hope to slack with again in the future :) 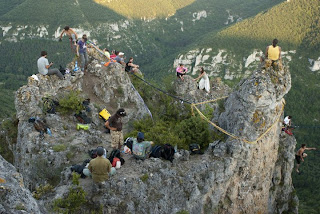 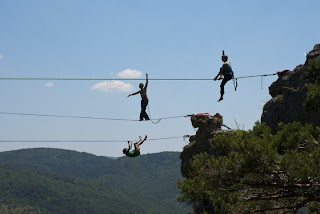 photo by Jordan Tybon
The area where the highlines were rigged was perched atop a small mountain, in a lumpy out-cropping of rocks. There were lines of all sizes! Janek and I both free-soloed the shortest line, The Bunny Line (11m) and coinsidentally I soloed it in a bunny suit! 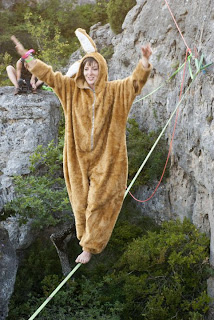 photo by Jordan Tybon
The world record highline (which has since been outdone, of course.) was a poorly-rigged (due to materials) 86m line, with distance webbing and a static rope backup. It was heavy, beastly, and the longest thing many of us had ever set foot on. I tried first while the backup was half untaped due to all the falls and catches near the beginning. This was my best try, actually. But, the rope was swinging back and forth and even flipping up on top of my foot! 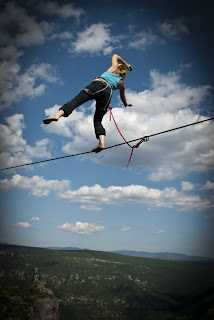 photo by Jordan Tybon
After my few attempts, they ended up tightening the line twice more, and finally Mich Kemeter, from Austria, sent! 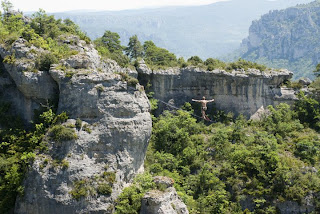 photo by Jordan Tybon
Janek participated in the trickline competition, placing 4th overall. Here is the movie of that:
It was a very successful trip, besides the sunburn. Many short movies were put together which show a great deal of how the atmosphere was in Millau. Looking forward to next year!


In July we went with the Gibbon Crew to Munich for the Munich Sports Festival. There was a guys trickline competition there that Janek participated in. 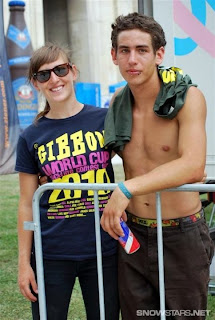 It was really fun bouncing around with the other Gibbons, plus checking out Munich for a couple days!
The next epic highline happening was our Longline/Highline Gathering in Berlin, Germany. 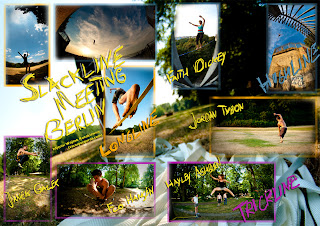 photo compilation by Vacaspurpuras
We invited our friends from all over Europe to come join us for a few days of longlining, urban highlining, and for the last stragglers even waterlining! 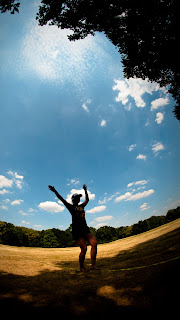 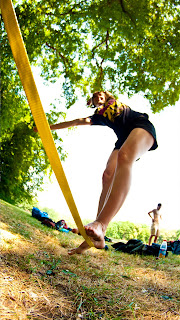 photos by Vacaspurpuras
The first day, some of the members of Landcruising came with a 100 meter peice of Aeon webbing, their new ultra light, dyneema webbing. I helped Sebastian find a spot in Treptower Park to rig it, and many enjoyed the easier-to-walk feel of it. The interesting thing was how slippery the webbing felt! But it defintely was easier then your average longline. Several other lines went up, 128 meters of Gibbon Flowline (which I walked first try both ways--yippee!) some heavy, terrible slackstar purple webbing sewn together in the middle, and we spent quite a bit of time trying to rig a 210 meter slackpro line. It was a hot day, 40 degrees C (100 F) and I suppose none of us were thinking too clearly because we continued using a linegrip to tension. We had about 7 people pulling to tighten it, and in once moment something popped! We soon realized the line grip had broken the webbing, and shot into the back of a friendly Berlin-slackliner helping us tension! And ambulance was called, and luckily we later found that he would fully recover, just had some severe bruising. It was however a good lesson for all of us. Had we read the package on the line grip we would have known that the first generations of such a product said not to use in high temperatures, since the glue under the rubber could melt. This is what happened, which caused the line to break inside the grip. It was unfortunate, but we were glad there were no worse injuries.
Hayley Ashburn from US came up from Stuttgart, since she was overseas for Gibbon. It was great because her and I were able to go out before the boys and rig the 40m "Sieg Highline" urban highline on the WWII bunker in Humbolthain. It took three hours, as it was my first time rigging a highline with two webbings all alone. I guess I do not have a mathmatical mind, because it took me the longest to figure out how to put the webbing inside a slack banana upside down! Yes, Ill admit it. So, I hung in a harness for almost three hours straight. Oh boy, it was not easy. Finally after rigging in 100 degree F weather (41 C) Hayley taped the line and gave it a shot. She unfortunately only had time for a few tries before she had to leave back to Stuttgart.  I had sent the line before and walked it again that day FM. We surprisingly put too much tension in it, but since I had used the line grip and taken the pulley system out it was just too much work to worry about tension. It was challenging since it was on double white magic, but still walkable.

Wojtek was there with his girlfriend Dominika, and he agreed to take some footage of us girls rigging and walking. His screen on his camera had been broken previously when Flo fell off of a longline, so he made a movie without actually looking at what he was filming. But it was my first highline movie ever! And I was excited. The film is called 3.03 because it was 3 hours of rigging for just 3 minutes of walking. 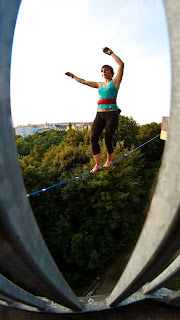 photo by Vacaspurpuras
That experience was extremely valuable to me though, because sometimes being with a bunch of dudes it is difficult to get in on the rigging. They might deny it, but guys like to take charge. Just try getting in on fixing your car while a bunch of boys are around, its similar to highline rigging. I hope to go on some female-only highline trips in the future, it was really fun. I was especially inspired by the french girls Ingrid and Jelena who are climbing hard and occasionally rigging highlines together. They came out with the first Girls Only Highline movie, and it was really great to see! Click on the link to watch that one.
So, please enjoy my first highline movie, 3.03, by vacaspurpuras.


Our flat was filled with 11 people, as was Jordans. It was an awesome time and awesome party. We went and rigged some waterlines for some extra fun. 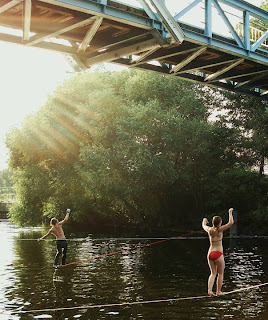 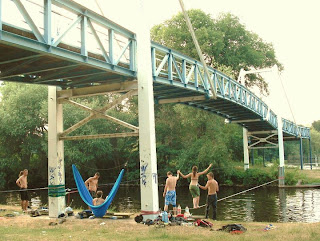 The Out Door trade show also happened in July, so we headed down from Berlin to meet the other Gibbon monkey's for 4 days of slacklining, looking at cool new gear from out door companies, and competing. There was an awesome guys competition, as well as a small girls competition. I took 3rd place among 6 girls, but ended up trading my prize for the 2nd place backpack anyways :P We also had the awesome opportunity to do a highline workshop, so Jordan, Janek and I taught basics of how to climb up the leash, safety lessons, chongo mount and finishing the line, as well as mental training. It was great, we had eight eager slackliners who all got on their first highline. It was about 20 meters long and some of them even sent it!

After the show Janek, Jordan and I all walked around trying to make contacts for future sponsorship. We met some great people and even met our current sponsor; Deuter. Here is the movie from the Out Door! 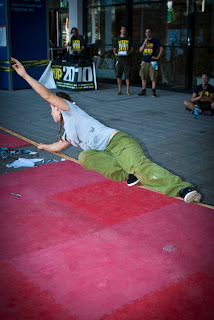 photo by Jordan Tybon
This was another monkey party, thanks to Gibbon. One night we were even treated to dinner by Momo's parents! 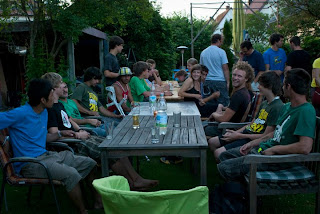