As Fall turned to Winter the weather changed rapidly in Poland. By October the leaves had already mostly fallen and the days were hovering around freezing temperatures. This did not stop us from traveling from Ostrov, CZ straight to Krakow to visit Wojtek, our friend who is making beautiful climbing/slacklining films through his production company, vacaspurpuras. We had planned to make a film with him previously, and once there decided to compile some tricklining and highlining footage.

Wojtek borrowed some very nice equipment to take the footage, and so we headed to a park in the center of the city to bounce around on some Gibbon lines and some threaded tubular. Of course Jordan and I were quite out of shape for tricklining, but we did our best (though I spent more time falling then anything.) It was a beautiful park, and the weather was chilly but by bouncing around all day we stayed quite warm.

The next day we headed to Bolechowicka Valley just outside the city to do a highline Janek had spotted some years ago, on the Bolechowicka Gate. 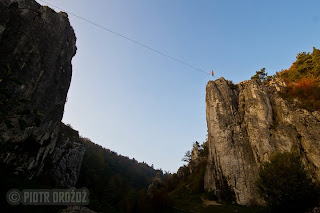 It was an amazing spot, and we quickly got to bolting. 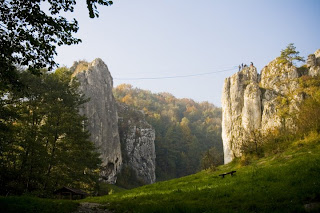 The driller ran out of battery, and Janek and Jordan finished the last bolts by hand. 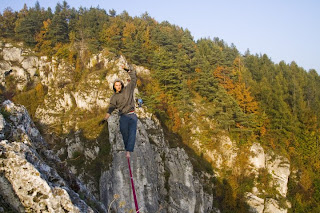 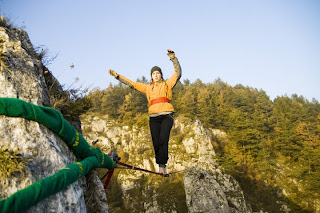 We rigged the 35 meter line up and one by one all sent it both ways in swami-belts. Janek took the first ascent and named the line Potato Power. 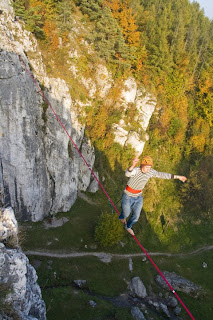 The weather treated us quite well, it was cold as heck but bearable. 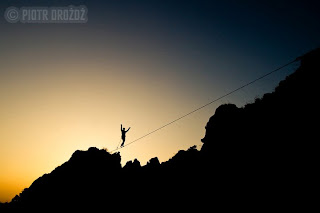 The reason for the name came about because at the time we all had about 15 euros to our name to share between us for a whole week. As we rolled around the supermarket, we counted every price of each item we put in our basket. Finally we decided the cheapest thing that would feed us the whole week was a 5 kilogram bag of potatos; so each day consisted of three meals of french fries or mashed potatoes. So explains the name of the highline and the name of Wojteks movie, "Potato Power." He entered this film into a climbing film festival competition in Poland, and took second place!

Please take a look and enjoy :)


PotatoPower from vacaspurpuras on Vimeo.
Thank you to Wojtek for the beautiful film!
Posted by Faith Dickey at 8:48 PM