US TRIP II - The next adventure!

So begins another epic adventure from the somewhereelseland crew; myself, Jordan and Janek. We decided to do another US trip this winter, bigger and better and longer then last years adventure. So, after scrounging enough money together for plane tickets, we all started planning an itinerary.

I flew to Texas first, before the boys arrived, and spent some time waterlining with Tar Zen and Caroline, and began planning a Slackline party, potluck and fundraiser for our group and our trip. We had hardly any money left after flying, and it seemed like a great way to promote the sport and our lifestyle as well as raise some money to make our plans reality. So, Sonora Lee allowed us to do it at her beautiful property, and it was a great success! I even went to the lengths of printing out some flyers (which were extremely expensive, stupid kinkos!) and passed them out. My friend Leigh Wise had her band, Aciable play music at our party. It was perfect--a beautiful ensemble of intstruments around the fire that night, with lovely Afro-reggae fusion flowing into the night air. 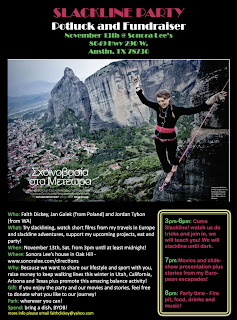 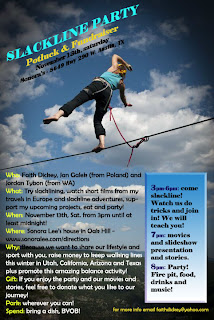 Many people were interested in Slacklining, and had never heard of it before! Jordan put together our first section of movie from the US Trip, here:


films all made by Jordan Tybon
Once the guys arrived we had the party then spent a week communicating with sponsors and doing some great projects around Austin. We rigged the first highline in the city, over the Colorado River on the Lamar Pedestrian Bridge - 30ft long and 30ft high "Walk in the Park" Highline. We all sent, and Janek and I soloed the line. 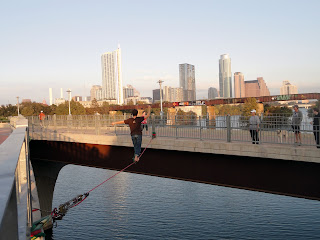 It was also Tar Zens first highline, and he sent it without taking any whippers! There was some great graffiti on the train tracks behind the highline: Focus on one point and breathe. 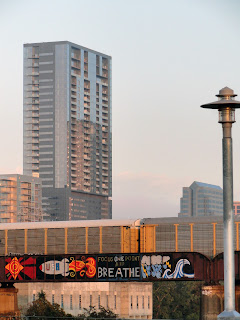 We did a 600+ foot longline in Zilker park, which I walked OS FM. It was so extremely windy that it was a fight, but I even surprised myself with my walk. Janek and Jordan both almost onsighted, falling just 10 feet from the end where your face meets the tree branch. The Austin American Statesmen even put a blurb in the paper about it! 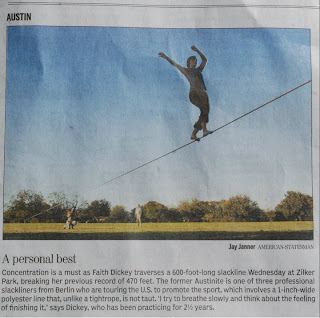 We also met some new Austin - slackliners, and hopefully revamped the scene while we were there.
Another great project was the 100ft "Bible Belt" highline, which was also a deep water solo line underneath the Mo-pac bridge. This line was perfect! We all walked it onsight FM in swami's and Janek and I soloed the line as well. Tar Zen also gave it a couple tries, and Caroline and Jeremy as well. 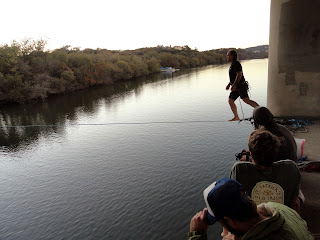 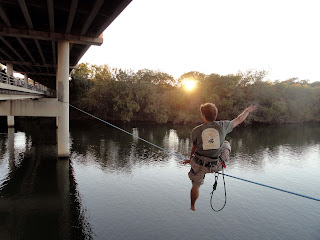 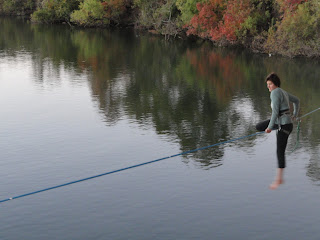 I sessioned it, first in a swami, then free solo, then with a harness to do some surfing and double drop knees. 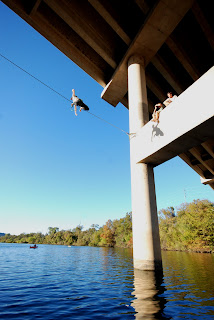 Photo Jordan Tybon
So, the time in Austin was warm and wonderful. Finally after being there several weeks we departed for Moab, Utah for the GGBY III Highline Gathering.
Posted by Faith Dickey at 4:17 PM