A movie by our friend Brian Mosbough


The next chapter in our US trip was in Utah, for the Gobble Gobble Bitches Yeah III, a super-secret highline gathering in the desert. In order to get there, we packed up "Rambo," my '94 Civic full of gear and food from Costco binge-shopping, and started on the road one evening. 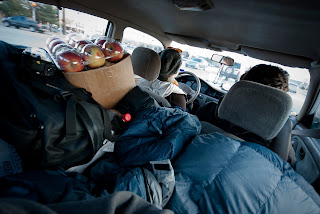 The drive took us through northwest Texas, a boring place with more roadkill then I have ever seen. That will sure keep your eyes glued to the road! I think I did most of the driving with my face a few inches from the windshield.

The drive continued through New Mexico, past Indian Reservations, Casinos, windy, open plains that lasted long into an empty tank, and then finally we crossed into Utah. From there we passed Moab and went to Terry's house to get a good rest after the 25 hour drive. The next morning we joined the crew of old friend and some new faces at "The Silt Road," a new highline location established by Terry. 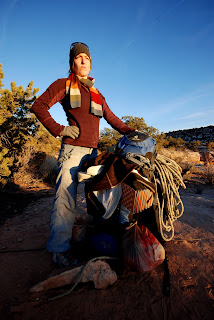 It was colder this year then last, though we had missed the snow that the others had endured. 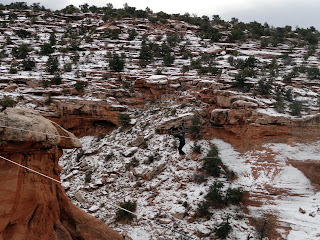 There were six lines rigged directly next to where we were camping, starting at 85 feet (26m) all the way to 200 feet (60m) The firepit was overflowing with ash, still burning keeping highliners warm between walks. This fire continued to burn for the entirety of our stay.

The evening we arrived was Thanksgiving, and our friend Dylan Buffington had hiked in a live turkey previous to our arrival. They had also slaughtered said turkey with a samauri sword previous to our arrival (and boy was I thankful for that!)therefore they had a bag full of meat. With twenty five people there, many set to cutting onions and potatoes and carrots, filling a giant cast iron pot full with the fresh meat and vegetables. They buried the pot under coals, and forgot about it just long enough to cook the Thanksgiving feast. That one turkey fed twenty five people, with leftovers! It was delicious, and tasted much different then a store-bought, factory-raised Turkey. I busted out the Costco pumpkin pie afterwards, which we passed around. We were very thankful for the slacklife that evening.

The weather was cold daily, and at night we luckily kept warm with our Deuter down sleeping bags. In addition to the five lines near our campsite, there was also two short lines around the corner at 37 feet long. GGBY is the place where everyone pushes their limits; this year we observed Andy Lewis set the longest solo record at 40 meters. It was inspiring and awe-evoking. 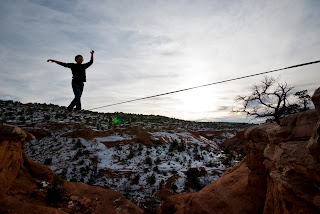 Our friend Mich had injured himself on a rope jump before we arrived, so unfortunately he was not around for much of our time there. It was a great time with Julien and Tancrede, some French highliners we knew of but had yet to spend much time with, we look forward to seeing them in Europe. The Americans, old friends and new were also great to become acquainted with, it was great to see more females there for highlining! We also met many Canadian highliners, who were also great fun! It was once again a very international meeting. 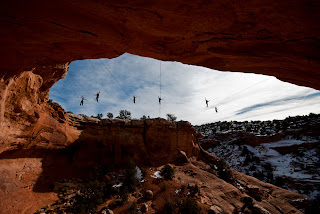 One day I had the idea to get a naked person on every highline in a row. This was something that had never been done, and seemed like a funny idea. The next mission was to convince six people to get naked in the freezing temperatures, and walk a highline. I decided to go for it, as well as Janek, a new friend Pierre, Tancrede and Julien, Mich and Andy. With this group, we had five nationalities represented: America, Canada, Poland, France and Austria. It was not as frightening as I had imagined, though I mistakingly put myself in the front of the cameras. Andy had some troubles trying to walk the 60 meter highline in an ankle leash, naked, but finally sent.

The mission for my team was to avoid harnesses at all cost, and we did. I did not wear my harness on a highline once while in Moab. I walked everything either solo, ankle leash, belt loop swami, or swami. I tried the 60 meter line last in a swami, however it was the coldest day yet and the snow fell as I fought on the line, finally losing motivation. I came away with two new free solo's, one on the 37ft line and another on the 85ft line. 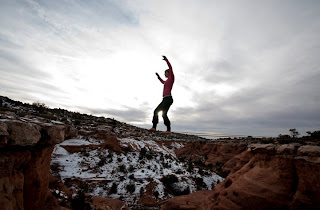 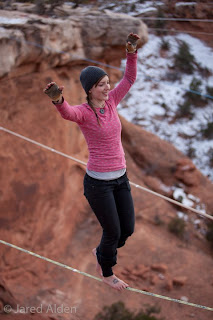 Soon after we arrived many of our highlining friends took off for other ambitions, but we stuck it out in the desert. We traveled to Terry's house to avoid a couple days of bad weather, do some laundry and restock, which is around the time Heinz Zak arrived. 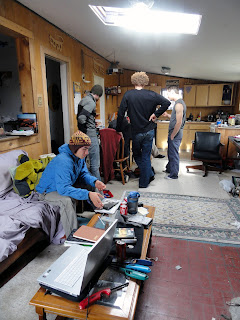 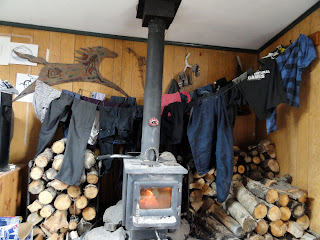 He had planned to meet Mich Kemeter there, however Mich had run off to skydive, so we got to know Heinz for a week. He traveled with us back to the location of GGBY so Jordan could establish a new line, "God Loves America" a 47 meter beast. We all walked it in a swami, and Andy walked in an ankle leash. 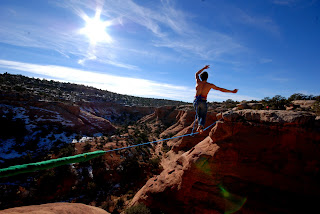 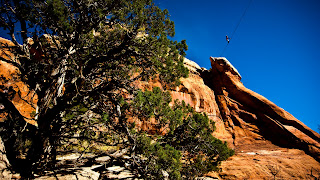 The line was not easy; we rigged it on double type-18, and it moved in a wonky way. We also rigged up a rope swing off the line, my first rope swing ever. I was terrified. I observed as one after another Jordan, Janek and Brian leapt off the cliff holding two ropes and a gri-gri in their hands, shouting sounds of joy as they swung forward and back again. I took my time, but finally jumped off. My forearms were shaking uncontrollably as I endured a three second free-fall. When the rope caught me into a gentle swing, I knew I was safe, alive, and enjoying the feeling :)

We did another rope swing at the Fruit Bowl later, off of Dean Potters Base Line.

This line was mega-huge, 200 feet to be exact! Frightening, but totally worth the swing. Brian Mosbough put together a fun movie from the ropeswings:

The time in the Fruit Bowl was fun, Terry rigged "Wet Beaver" again, walked it several times and let me give it another go before derigging. This year I walked it in a swami. Many people walked Dean Potters Base Line, a nice 40 meter long, exposed highline. It turned out to be Masons personal best: 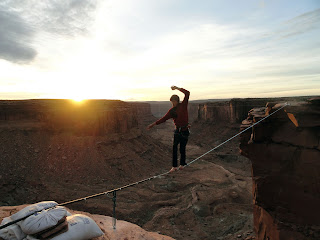 I sent Deans Line in a swami, On sight, though it was not easy! The line is quite exposed and slightly unlevel, but beautiful. 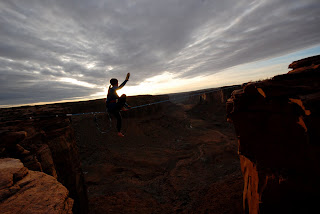 Andy went to work putting up his 420 foot highline, which I tried twice on the last day; felt like trying a long, heavy chain. Not this time! It went unsent, and finally he used it to drop off into a base jump. Another base jumper named Richard showed up and also dropped off the 420ft line, and watching this was very interesting! 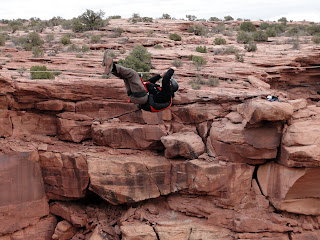 We returned to town again, ate dinner with a new friend, Ryan, who works at a restaurant in Moab. We also enjoyed staying with Brent and Canyon Cain, a great family of climbers who live in Moab as well.

We returned to one more location for highlining, a new area that we hope will be called "Polygamy Point." On the way, Janek and I picked up a hitchhiker named Jacob who was travelling to Oregon, and would ride with Brian after we highlined. He came camping with us, a typical Oregon hippie kid. 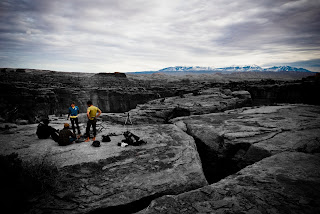 Janek took a first ascent of a lovely little 40 foot highline, which he named "Just a Quickie." Him and I both soloed the line after walking it onsight in ankle leashes. 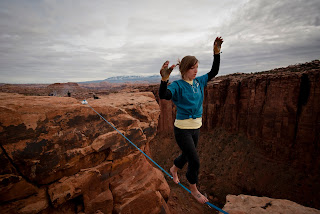 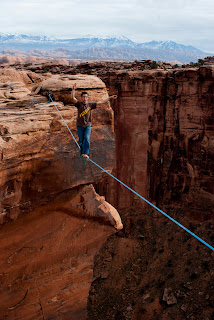 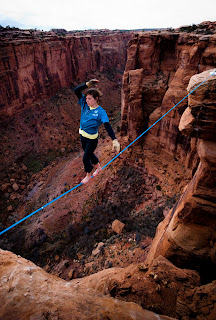 We also rigged a couple of nice lines that were previously established, both beautiful. One was a 60ft line called "Where Cowards Scare." 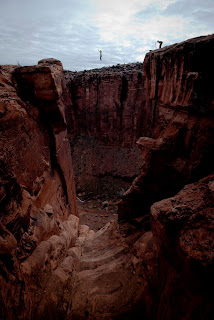 The other line was 120ft long, called "The Beagle Has Landed," a terrible name we tried to talk Terry out of, but Terry is Terry. 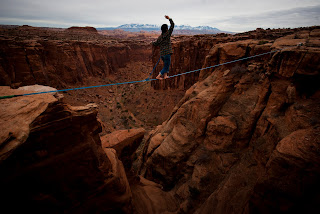 This day showed how efficient we were with rigging, since we rigged and walked 4 highlines in one day, packed up camp and left! We did them all with Type-18 and a backup rope, leaving the tapes on and transporting the line and anchors to each new spot, then tensioning. 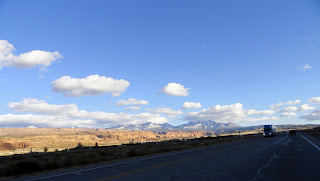 That wrapped up our Moab adventure, once again epic, and once again we pushed our limits. Here is a list of my new highline sends on my part: 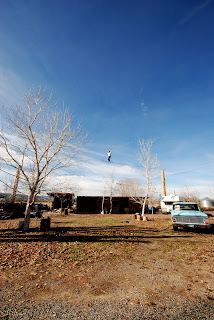