Ludlow - Slackin' with the Ghosts

Once our adventures in Moab were finished, we loaded up our little Honda “Rambo” and began the 15+ hour drive to Los Angeles. We bade farewell to Brent and Canyon and thanked them for their hospitality; hoping to meet again in spring.
This year I chose a new route to avoid the mountainous Utah, so we drove south on the 191 into Arizona, taking the route through Flagstaff. On the way through southern Utah, we saw a couple highline spots. One was in Bluff, Utah, at a rest stop and tourist shop. A red spire sticking straight up! 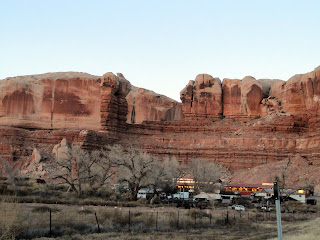 our drive-bye highline spot. (photo Jan Galek)
The next was in Red Lake, unfortunately since I was driving and the boys were snoring next to me, I was the only one to see the two spires, equal heights, standing erect right off the road! Maybe next year…
The car huffed and puffed a bit going up to Flagstaffs 7000 foot elevation, but like always we made it. The landscape had changed dramatically since Moab desert, the area we were in was filled with tall pine trees, standing dark and direct under the clear night sky. We were close to one of our future highline destinations; Sedona, but had to get Jordan to LA for his flight. After many hours of driving my eyelids began to feel heavy and I stopped to switch driving with Jordan. I fell asleep in the back, reminding him to wake me when we entered California so we could find the exit to our ghost town.
Somewhere off the I-40 we pulled off for the exit to Ludlow, on old Route 66 in the Mojave Desert. Jordan parked in a trucker’s lot next to a gas station and we all threw our sleeping mats down to pass out on the gravel. Five hours later the sun was high and we were sweating in our Deuter down sleeping bags! Besides the frequent trains passing through the night, there was not much else around. 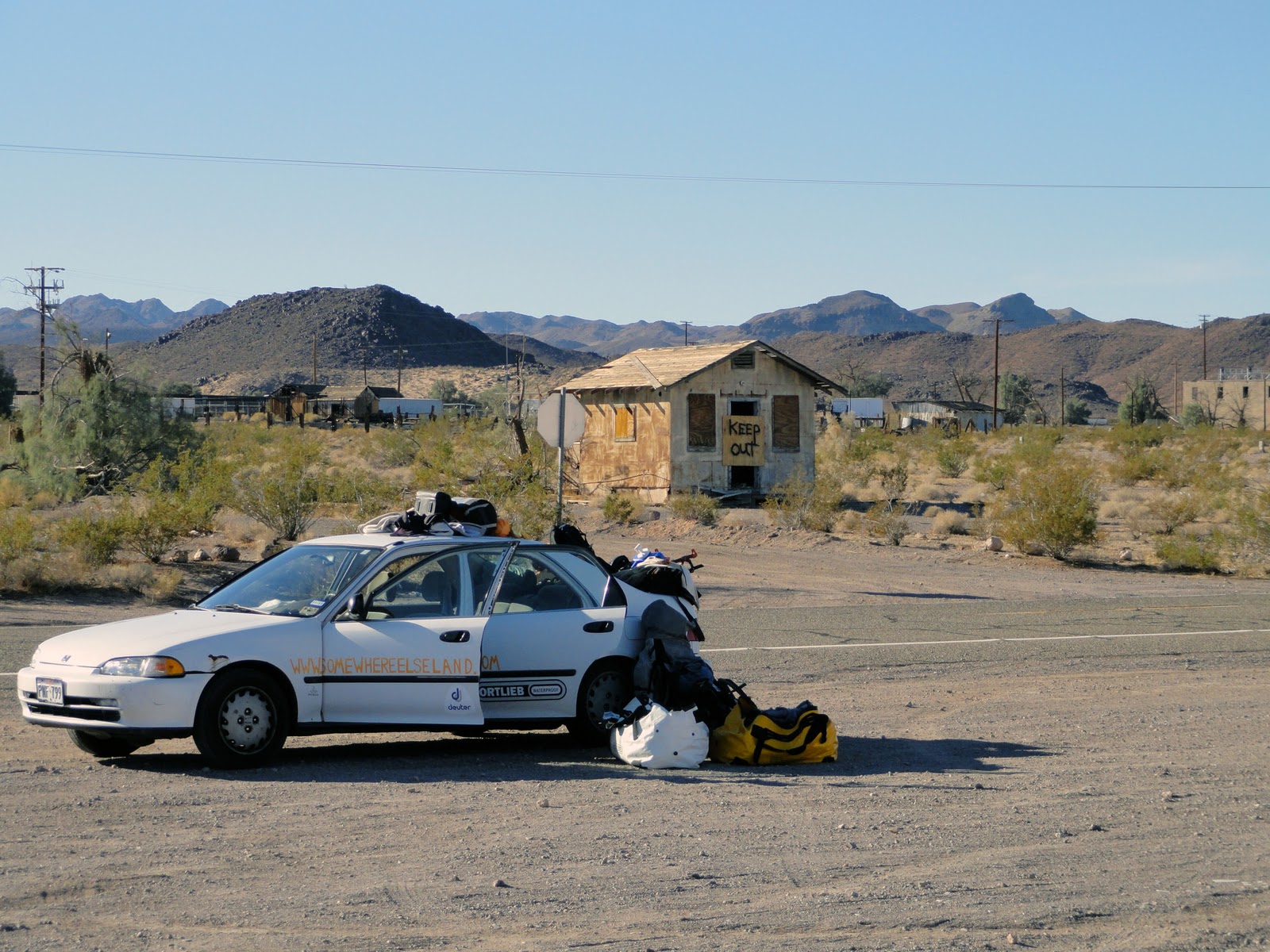 "Rambo" waiting to drive us to LA (photo Faith Dickey)
The backdrop was small desert mountains, purple against the light blue sky. The highway seemed so busy compared to this place we were. Ludlow has a few residents who run the gas station, the Inn and the tire shop; however most of it is deteriorating and gutted buildings lying in the sun. Ludlow was once a mining town and a frequented stop by the trains and travellers, however the mining died out and I-40 was built bypassing the town, which lead to it becoming the ghost town it remains today. There is an old café/dairy queen that has been burned from the inside out, an old Petrol station and an old Mechanics garage all in a row; graffiti all over and left filled with junk and old gas pumps. 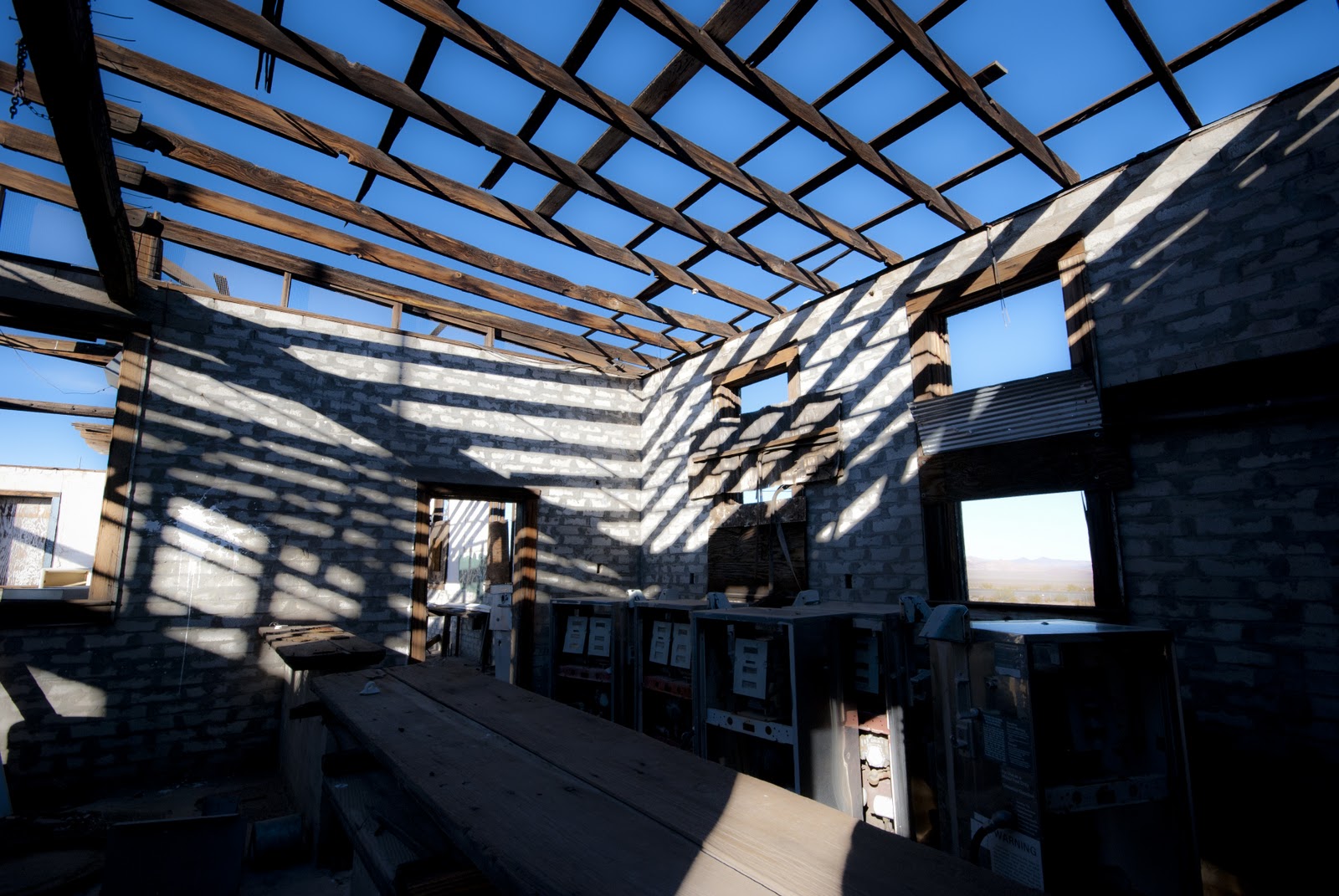 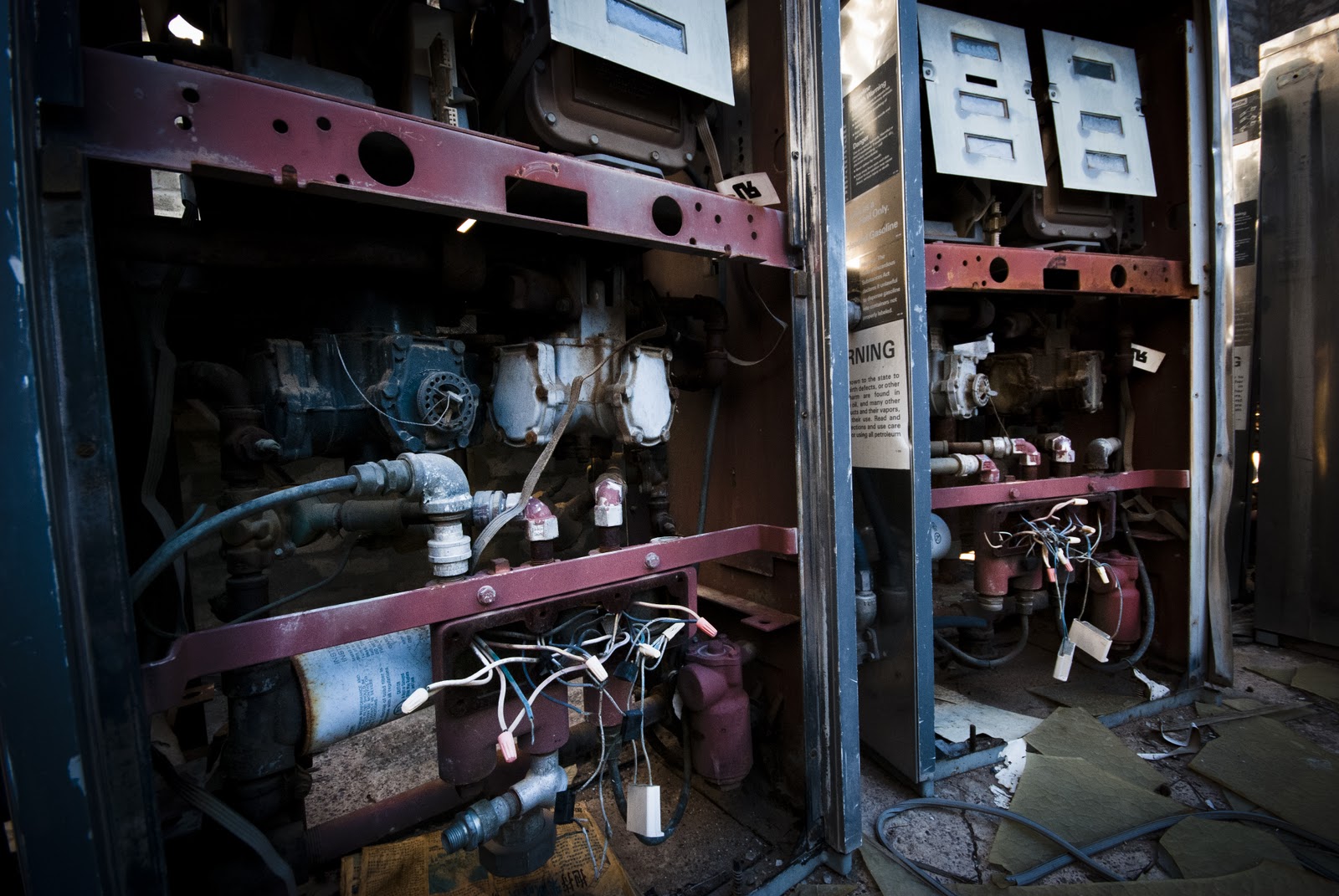 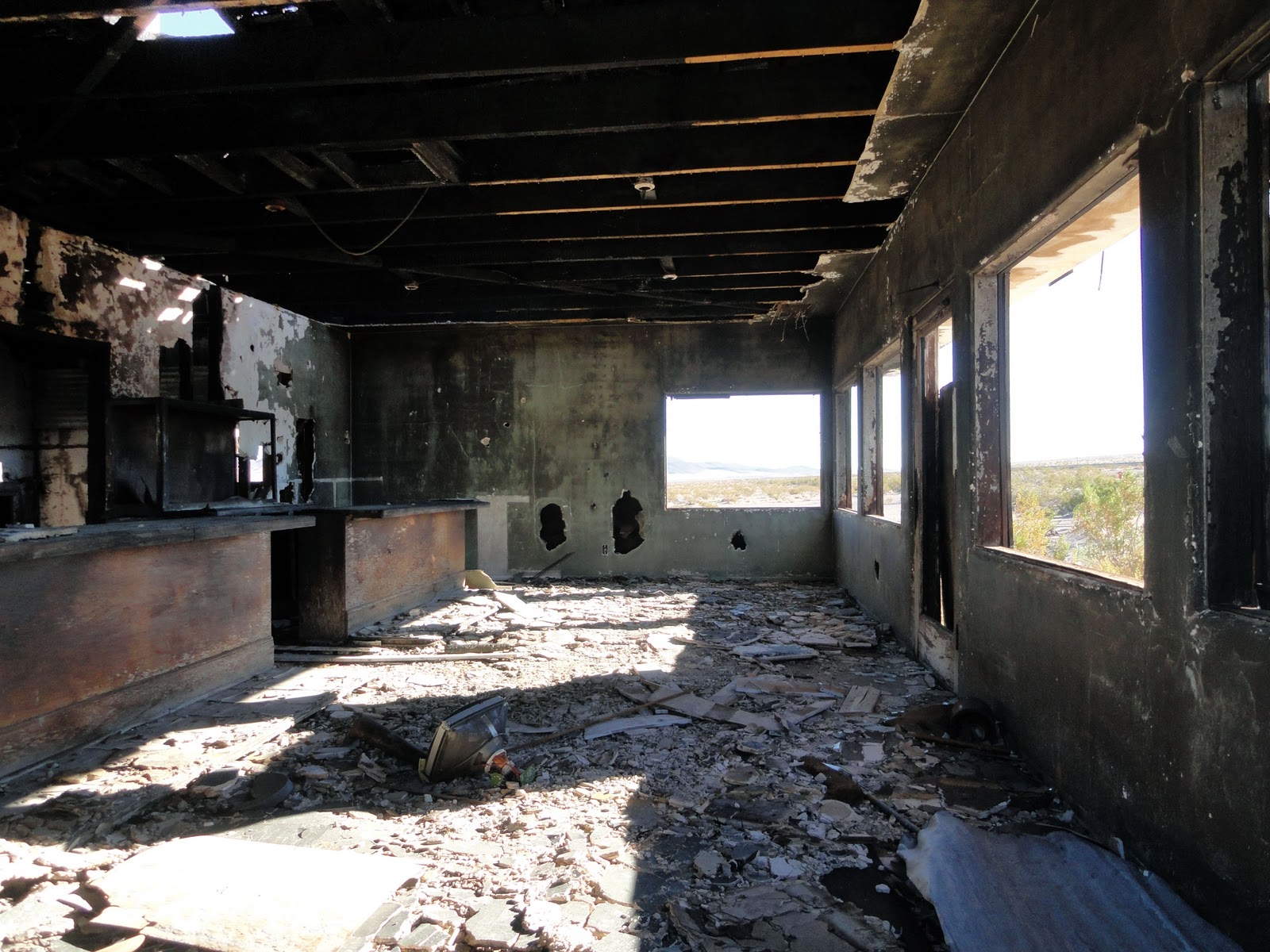 The old cafe,burned. (photo Faith Dickey)
Of course our plan was to rig a slackline. We set up a very loose threaded tubular line in order to prevent damaging the buildings. 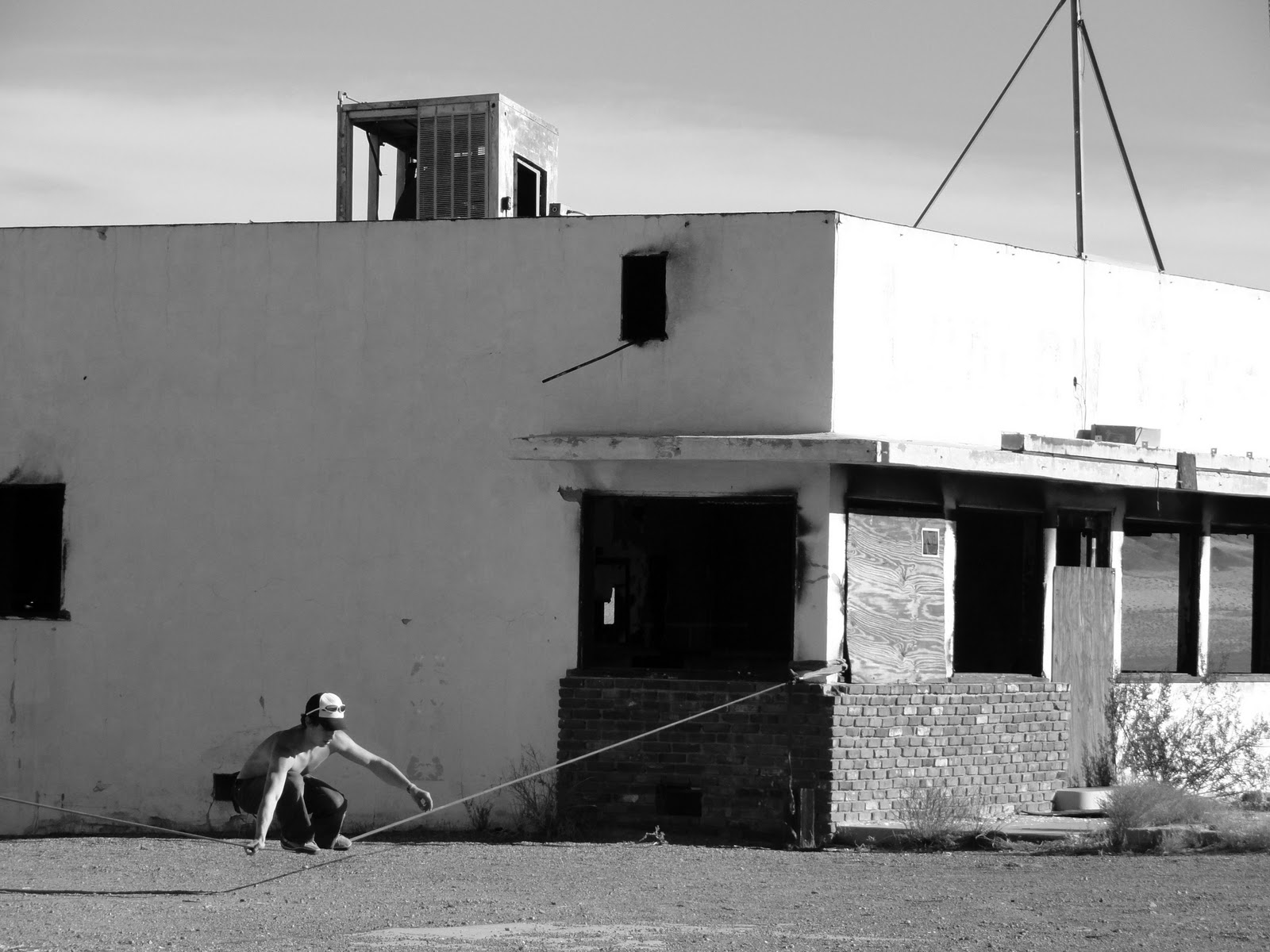 Janek laying down on the line (photo by Faith Dickey) 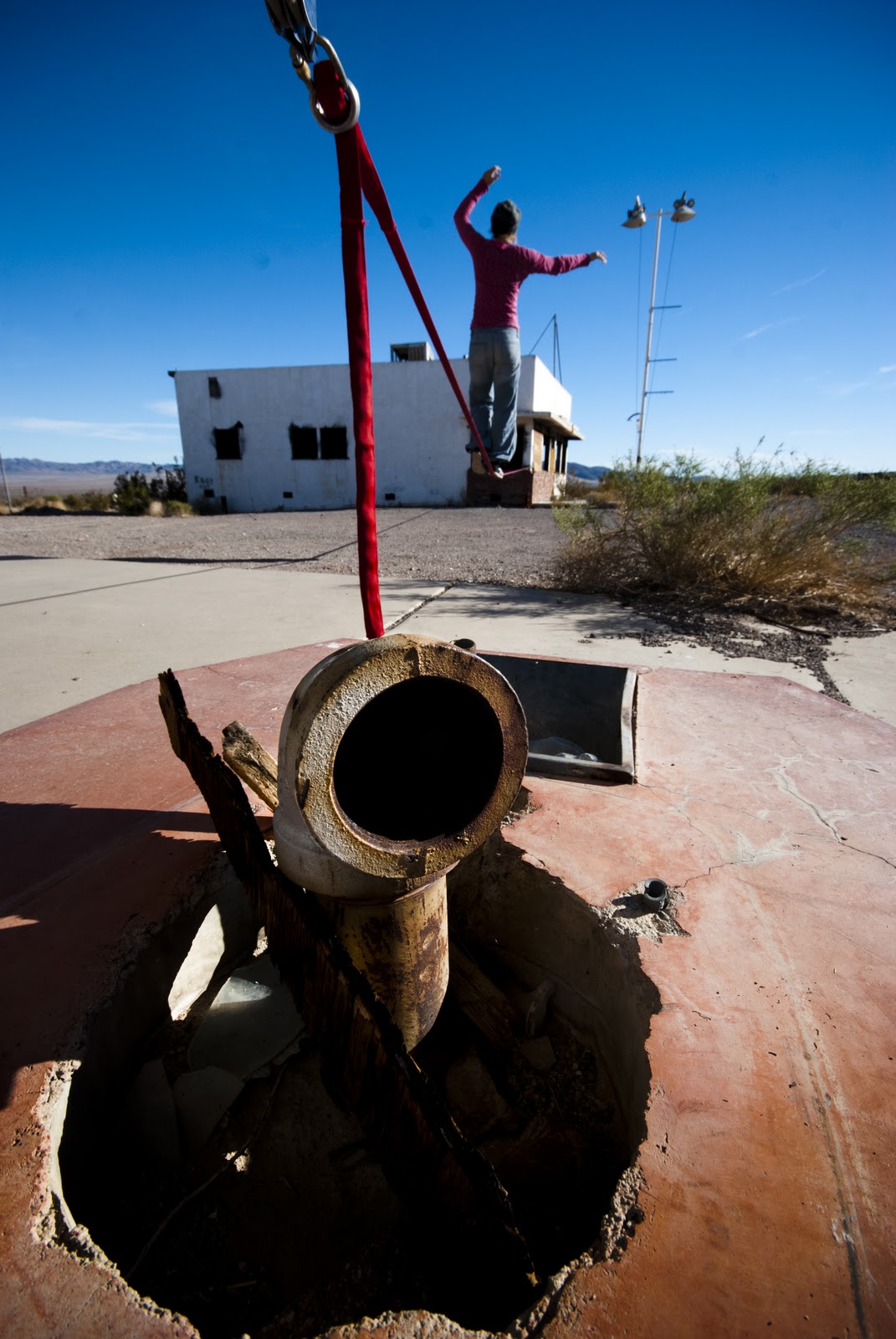 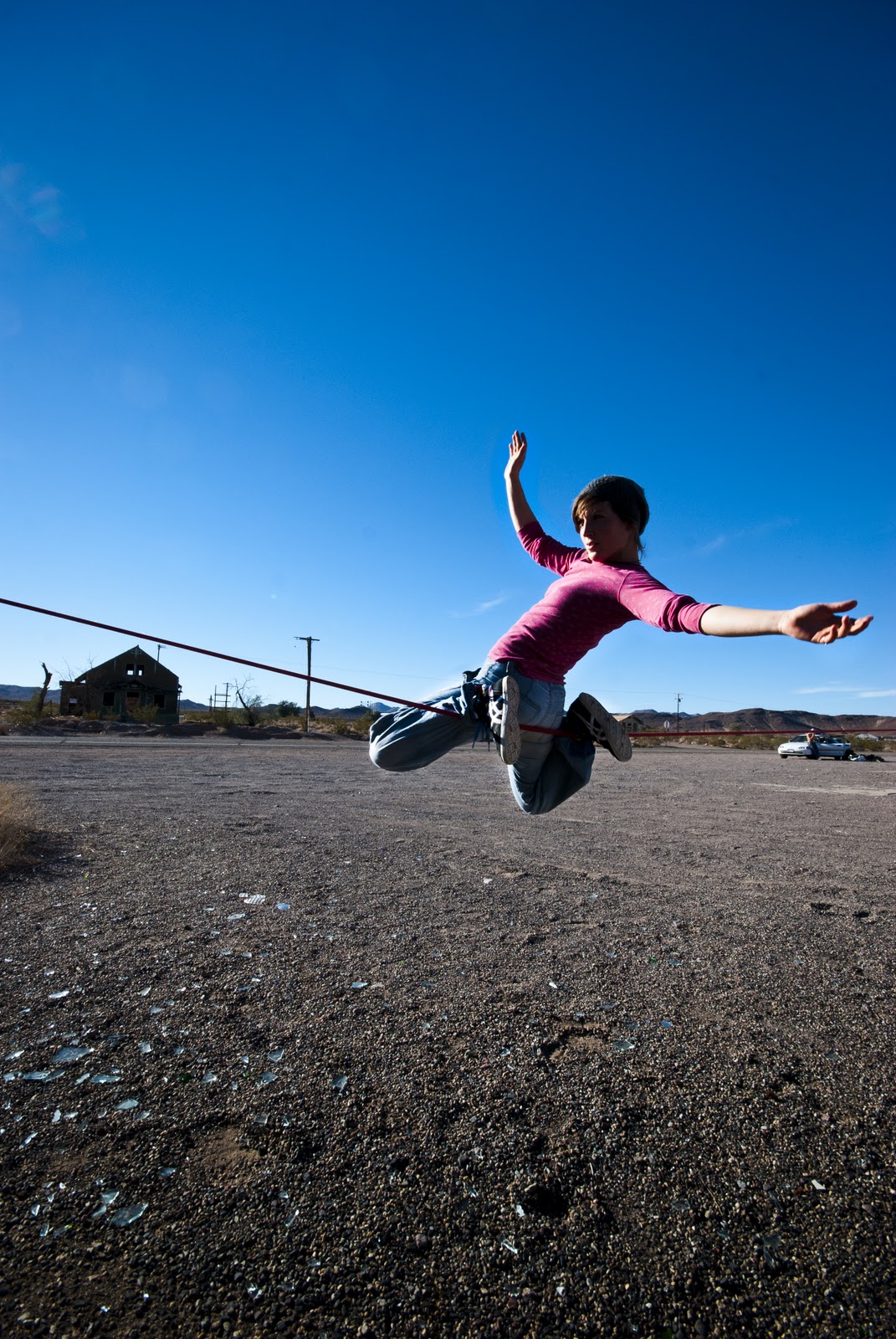 photos by Jordan Tybon
I explored the old house across the street, covered in "do not enter" spray-paint, and finally we packed up to finish the drive to Los Angeles. It was our first experiences in a ghost town, and while this one was not totally uninhabited, it is eerie to see urban decay and how small towns cannot survive without a highway, meanwhile cities are growing out of control. 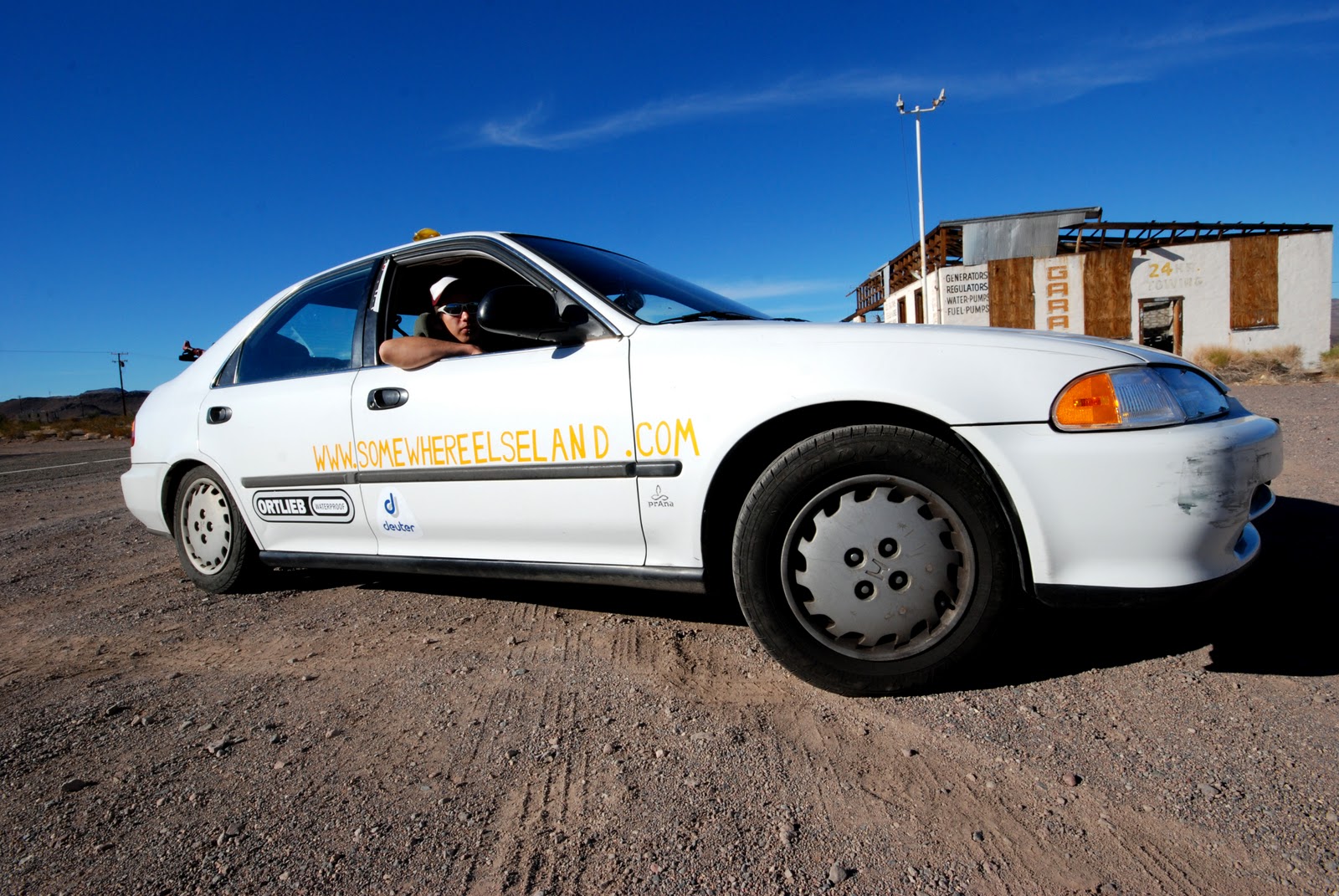 photo by Jordan Tybon
We arrived at Ric’s house in LA midday, to warm and sunny weather, and not a surprised look on his face.
Posted by Faith Dickey at 9:51 PM