Along with my highline team SWEL, we completed a project that Janek had been eyeing since he started slacklining. In the south, on the border with Slovakia sits the Tatry mountain range; famous in Polish climbing history and the only alpine style mountains in the area.


We had just finished the Urban Highline Festival, and after a short break we all headed to Zakopane, the town nearest the Tatry's. There we were met by Bartek Gąsienica-Ladzi and Kamil Kluś, two local slackliners. Kamil and his family kindly allowed us all to sleep in an empty room of their guesthouse, in a beautiful mountain style cottage. We spent the first evening planning and then went to a traditional restaurant for dinner on the main street, complete with a small instrumental band playing traditional music. After beer, pierogi and other Polish dishes (all sponsored by Kamil) we headed back to catch up on sleep.


The next day it rained. All day. Our fourth teammate Kwjet arrived in the evening, and we went to borrow helmets from another local slackliner and climber, Łukasz Janczy. The next morning we took a taxi loaded with stuff to the barrier where only guides and employees of the hut can go. He dropped us there, where we left Wojtek with the packs and the rest of us headed up the 10 km hike toward the campsite. 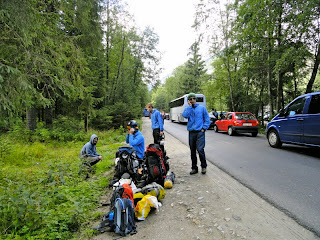 The place was swarming with tourists. Whether old people with trekking poles or girls in high heels, they were all there; headed to the hut to take a picture next to Morskie Oko, the lake at the base of the Tatry's.


In two hours we met Wojtek, wating on the road with our gear. He had ridden in a jeep with all rangers, a sheep in a lions den. We walked with our heavy packs down a bumpy, muddy dirt road to the campsite. After a quick bite to eat and some coffee, we unloaded the gear, sorted what we needed, packed our packs and began the walk to the highline spot. 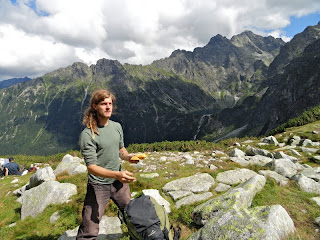 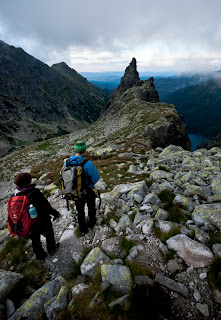 photo by Jordan Tybon
After one kilometer we reached the hut, a century old wooden house built in the traditional style. It sits next to Morskie Oko, a beautiful blue lake created from runoff of the Mountains. The path leading to Zadni Mnich, our spire, was well-made with slabs of rock laid down solidly leading up gradually. With heavy Deuter packs we were up within 3 hours. The last part was the most grueling, as it is steep and rocky, the place mostly climbers go. We passed the Mnich, the bigger point, and continued on to climb over boulders up to the notch beneath Zadni Mnich. 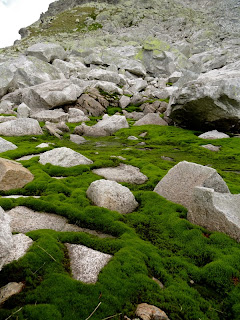 We separated into two groups; Jordan and Kwjet making their way up the rocks, despite lack of climbing route. Janek lead two pitches with me on the tower, the temperature quickly dropping and causing us to shiver. After scoping the rock out, both sides agreed it would be possible to rig the line on a mixture of equalized climbing anchors and natural protection, so we left fixed static ropes, stashed our gear in an Ortlieb waterproof duffle bag, and headed back to camp as the sun set. 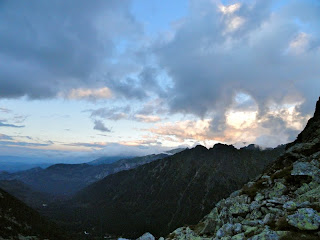 Hungry and tired, but feeling accomplished for getting so much done after starting so late, we ate a hearty meal of---you guessed it, pasta! Though we should have cooked something more special since it was Janek's 23rd birthday that day...

The next morning at 3:30am,  Kwjet , Janek and our cameraman Wojtek awoke, drank coffee and began hiking toward the highline spot. We knew rain would come that day, and they hoped to get a head start on the rigging. Luck was against them however, and it began raining as they began hiking. Once on Zadni Mnich, the temperature decrease caused the rain to come in snow and sleet, which they endured, finally rigging the line. Jordan and I hiked up in fairly good weather, and saw Janek get the first ascent of the line from the path. 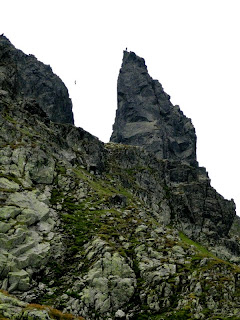 Kwjet also walked, despite their lack of sleep and frigid weather. Once Jordan and I were at the notch, the fog rolled in and it began raining again. 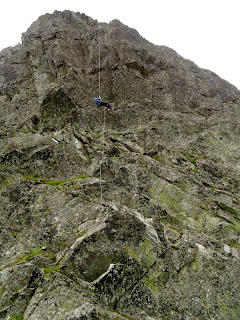 Jordan ascended the fixed rope to the anchor, and after several failed attempts walked the line in complete whiteness. Below Janek, Kwjet and I cowered underneath slight overhangs trying to stay semi dry, shivering and hoping the sun would return. Hearing Jordan taking falls on the 20-something meter line deterred me from trying, so I decided to wait for the next day, my hikes only purpose was to bring the riggers sandwiches that time.


We retreated in light rain, finally making it down to the hut where we shared beer and rested our feet. Back at camp Jordan cooked curry, and we all fell into our sleeping bags happily.

The next day the weather was in our favor. It was sunny and clear skies, so we ate a hearty breakfast and headed up to our highline spot. 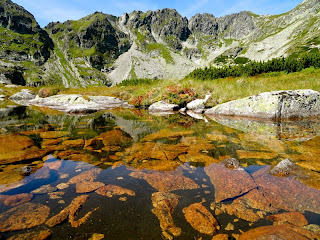 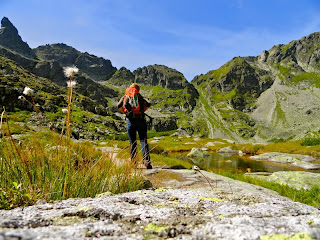 There were many climbers out that day, and they hung on their ropes to take photos of us highlining. Kamil and Bartek joined us, Kamil taking some good tries at the line and Bartek walking it one direction. 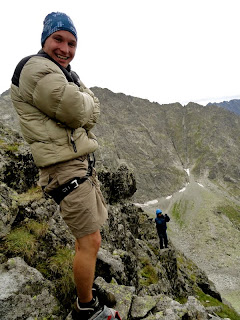 Everyone sent the line for a second time, I walked on sight full man in a swami belt, then walked again in a harness with a GoPro on my hand. The line was the most difficult 25m line I've ever swamied. Besides having an injured leg, the exposure was incredible and it was freezing temperatures to boot! It had been some time since I had highlined, and despite the line being short compared to what we were used to, I felt the fear inside of me that reminded me of beginning highlining; when you cannot calm your body down and you must force yourself to stand up and walk. 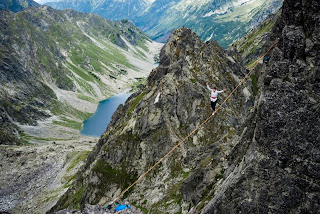 Janek and Kwjet also walked in swami's, then we began de-rigging as some clouds headed our way. 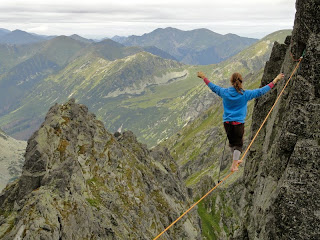 By 3:30pm we were hiking down slowly, with a new line established and sent all around. 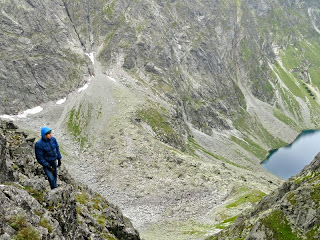 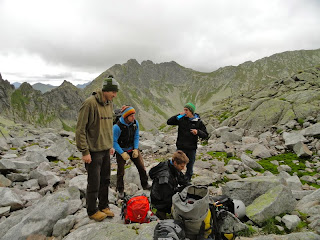 It was a successful trip, besides the slightly ridiculous rules of the National Park (i.e. no camping on top of the mountains, no bolting, amongst other laws.) It would have been a good time to chill out, however with our good timing we decided to go ahead and get down to Zakopane. 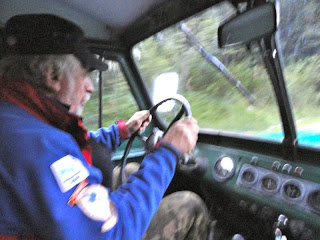 We made a deal with the Campsite director to drive us and our gear down the 10km road to the bus stop, and he agreed. I took shotgun and after a bumpy ride through the forest we picked the rest of the guys up. 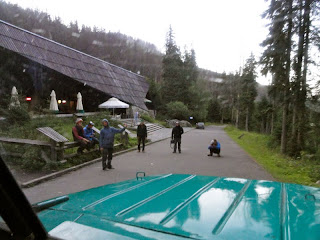 Upon reaching Zakopane, we scarfed down pizza and coca cola, then bivied in Kamil's room before heading back to our homes the next morning.


So in due time there will be a movie produced from Wojtek (http://www.vacaspurpuras.com/) 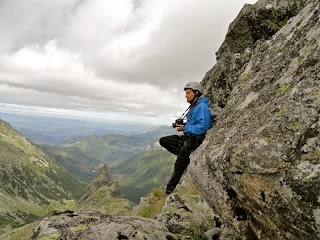 Big thanks to Bartek, Kamil and Łukasz for all their generosity and help! We would not have been able to do it so smoothly and efficiently without you guys. 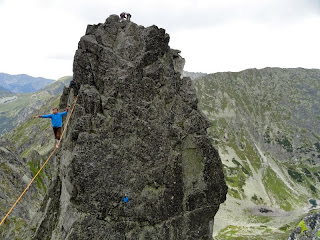