In June Janek, Jordan and I travelled to Wien, Austria to participate in the first Austrian Slackline Open, which would include tricklining, longlining and highlining in nearby Peilstein.
We hitchhiked and were welcomed by Thomas Snudl to stay in his flat while he was in the hospital recovering from a broken neck in a slacklining accident. It was our first time in Vienna, which is a beautiful city. 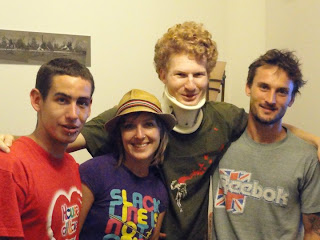 The first day of the Slackline Open was spent in a big park. The spot was perfect as it has a sectioned off area with a high fence, which kept the number of park goers playing ball or running with their dogs to a minimum. There were several tricklines set up, as well as two longlines. The longline competition had a 100m trial line, and if someone was able to walk it they qualified for the 160m competition line. I walked the 100m onsight full man, it was on a new webbing from Elephant slacklines. The webbing was sharp. The competition line took me a few more tries, but I managed to send it on my third attempt. Janek won the longline competion by walking it onsight full man in the shortest time. Alex Schulz came second and Lukas Irmler placed third. 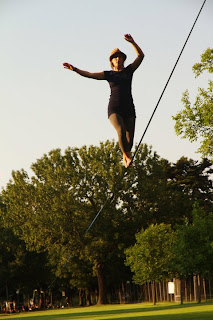 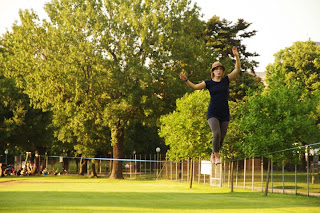 The trickline contest had a qualification round, and that evening the finals were held in a brewery. This brewery also had a short urban highline, which was quite fun but had a long line. Elli Schulz managed to beat out the boys in the trickline competition, Janek came second and who came third? I cannot remember... 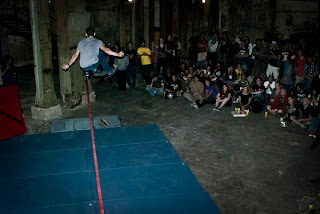 The next day we awoke early to go to Peilstein. The organizers rigged a 30 meter highline for the competition, and Lukas Irmler and Alex Schulz rigged Mich Kemeters old project line, the 81 meter. The highline contest started with a bang as Jordan went out to do some tricks. He must have been tired because he forgot to tie his leash, and after walking 10 meters of the line it slipped from his harness and hung at the beginning. Everyone in the audience gasped, but Janek and I urged them to be quiet about it---it was better that he did not know. When he arrived at the other end, I told him to wait to do tricks until the return. He tried to turn around on the highline to start back the other way, and fell---thankfully catching the line. He still was unaware that he was solo. We pointed it out to him and he said something along the lines of "oh shit." After that stunt someone was assigned the task of checking every participants knot before they began highlining. 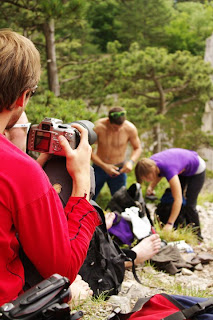 The contest ensued, and despite having a couple months break from highlining I was able to do a double drop knee, lay down, buda, surfing and korean buttbounce. 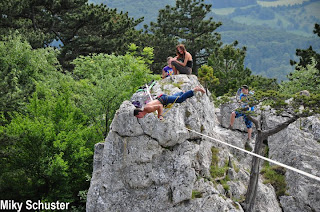 The competition was tough, but in the end I placed second, Lukas first and Janek third. 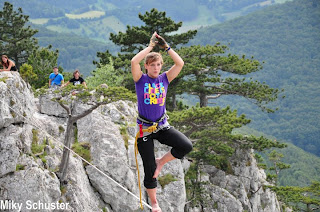 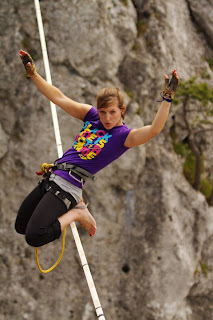 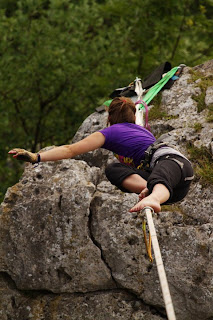 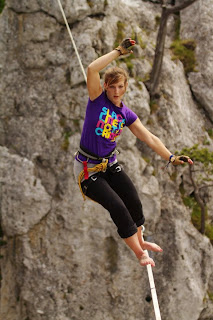 After the competition, we went down to try the beastly 81 meters. I had no expectations to walk the line, and watched Christian fighting, Lukas fighting, and of course Alex sending it with no problem. The first attempt lead me out about 25 meters, and I immediately realized it was possible to send the line. The second try I was determined. I turned up Animus Vox by The Glitch Mob, and fought my way to the end. It was a long walk, but everything was perfect; the tension, the weather, the atmosphere...I finally beat my personal record, and set a new female world record in highline length at 81 meters.
The highline was named by Alex Schulz as "Bloody Red." 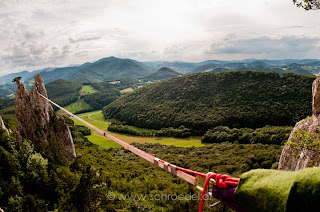 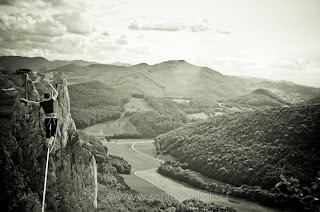 The last day of the festival was spent waterlining on a nearby pier in Vienna. The weather became cooler than expected, and windy, but everyone had a great time chilling out and watching everyone waterline. 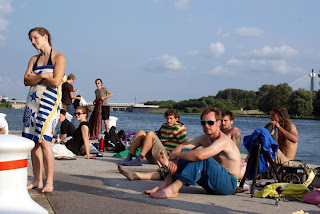 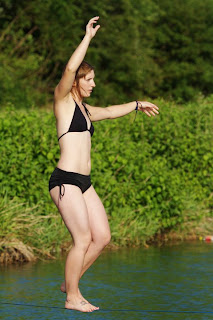 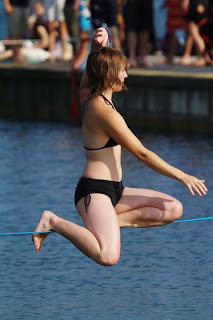 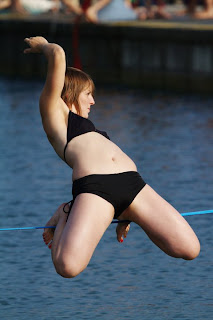 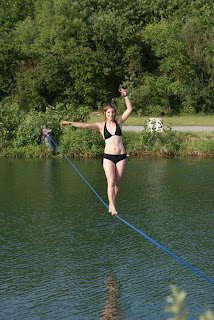 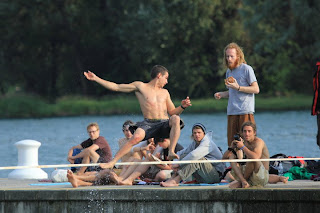 Big thanks to Doc Slack and Thomas Snudl for hosting us dirtbags, and thank you to all the organizers, Vienna Slackers and anyone else who made the great event happen! See you next year!