Over a year ago I performed a stunt for the new Volvo trucks being released this year. The stunt was quite thrilling, nothing like I had ever done before. It was walking a line suspended between two Vovlo semi-trucks driving down the highway, with only enough time to walk before they entered a tunnel.

I had the honor of working with Peter Pedrero, a longtime stuntman and very knowledgeable stunt coordinator. He ensured that the stunt was performed safely, so that the risk was kept to a minimum. The riggers were also a joy to work with, Extreme Locations Rigging LTD, we had quite a bit of fun together.

The stunt itself had to have been the most difficult line I have ever walked. It took numerous rehearsals and numerous attempts, the ratio of walks to falls was quite distanced. Unlike a slackline, where you cause the movement, the line between trucks was moving due to bumps in the road and of course any sway in the trailers where the line was attached. The drivers were extremely impressive, taking great care to drive parallel in order to keep the line as still as possible.

So, without further ado, please have a look!

Also take a look at the article published in an auto magazine in Croatia, I cant understand it but it looks quite funny! 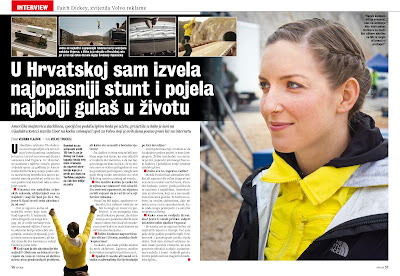