Time flies! Three years ago I came up with the idea to host a Girls Only Slackline Festival, and with enough interest it was held in Ostrov, Czech Republic, a central location to the European countries with the most female slackliners and highliners. The first year, only 6 girls attended and I had to have my boyfriend at the time come along to help me rig the highline since no other females seemed to know how to rig.

The second year was almost triple the turnout, with 20 girls coming from around the world to slackline and highline together. We had eight countries represented. Pino of Pod Cisarem sponsored us the Himmelreich cottage next to the pub, which was a luxury to say the least.

This year was more mellow and with totally different energy than the years before. Around 14 ladies came, from Germany, Czech Republic, Switzerland, USA and Poland. It was incredible to see the progress of some of the girls who had been there the year before. 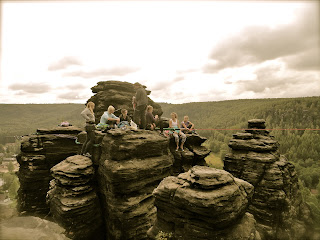 The girls were so supportive of each other, it was incredible. What seems to be so special about this festival is the lack of competitiveness, each girl is aware of her strengths and weaknesses and uses the others for support and advice. Girls love to talk, this is not just a stereotype, but what is amazing to stand on the towers and witness such a pack of girls talking about highlining! 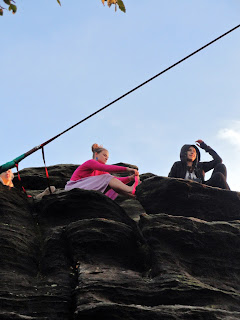 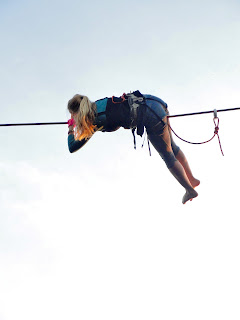 There were some old friend who returned again this year, and I was thankful for Ancee and Chrislaines rigging abilities so we could put up highlines efficiently. I had one new line about 15 meters long rigged by the time the girls arrived, and with Chrislaine and Ancee we rigged another 28 meter highline. We had plans to rig a third line but in the end two was just enough. Ancee was sure to rage in her t shirt from the year before! 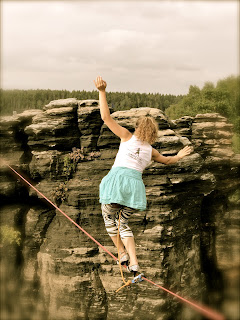 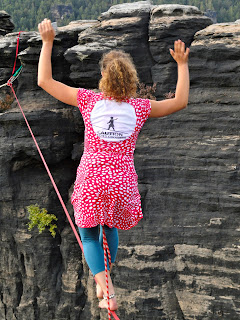 Often with this festival most of the activity practiced is chongoing on the highline. This seems to be a common learning curve for girls who are just starting out. 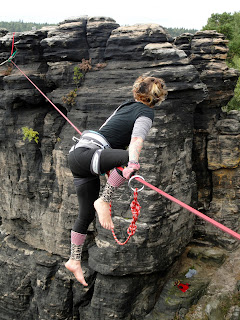 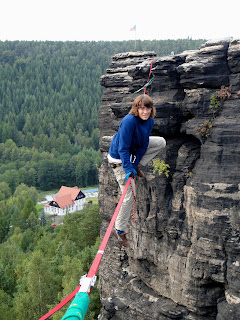 Naturally the progression from chongo is climbing the leash after a fall. This can prove to be a huge deterrent for girls, who lack upper body strength naturally and who dread being stuck hanging in a leash waiting to be rescued. My friend from back home, Kimberly (the badass mother of 4!) learned climbing the leash, and I happily went out and hung with her on the line to give her an up-close demonstration. 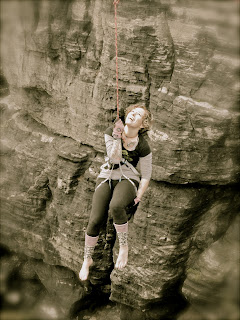 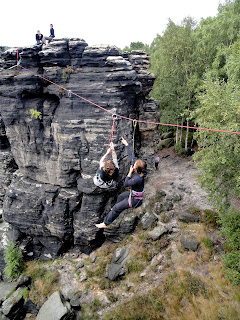 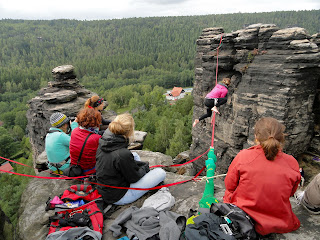 Another important learning process in becoming a highline is catching the line. If you are able to catch you can save quite a bit of energy by not climbing the leash repeatedly. Some of the girls who attended the GOSF this year were quite proficient in catching! 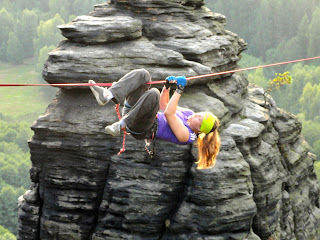 Overall, this festival proved to me once again that it is worth the rigging, the planning and the pushing. There are always girls who are thankful for such an event, one that is for them. You can go to any highline meeting and find boys, but it is rare to experience one with mostly or all females. The atmosphere is different, special, and necessary. I think the festival works as a great filter too---the girls who come are there because they love the sport and they have a legitimate desire to become a highliner. There is no superficial reason to come to this festival; there are no boys to flirt with, not very many cameras, no competitions or prizes, only highlines, slacklines, czech food, czech beer, and girls of all levels. 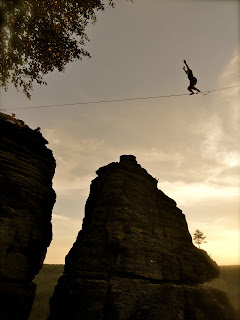 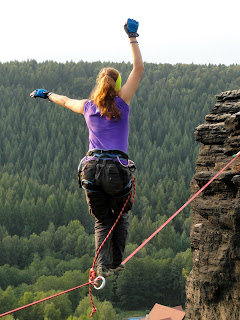 I hope this idea of the Girls Only Slackline Festival will catch on worldwide, so that on every continent annually there is a place where girls can meet and share their abilities, passions and curiosities for this sport of balance. I constantly bombard myself with the puzzling question of why there are less females than males in the outdoor/extreme sports world; and the only thing I am lead to believe from observation is that girls are more cautious than boys. They seem to really think about all the possible outcomes of an activity before going for it, and I think this can impede them from trying their hardest in a sport which often inflicts pain (not seriously! It heals!)

There are a few realities that are evident in relation to this problem; women have been fighting for their rights for a while now, and we are still doing so. There is pressure all around us to fit to some unrealistic mold of femininity, and I think this totally inhibits girls ambition for outdoor or extreme sports. By far, highlining is not the most feminine sport, it leads to bruised legs, bruised egos and sometimes less than attractive screaming, heavy breathing and ugly facial expressions. To me, there is nothing more womanly than a girl fighting on the highline, but according to society it goes against everything we are supposed to shape ourselves as. I hope we can change this. Not every girl needs to highline or be a highliner, but those who want should and nothing should stop them.

So, thank you to all the girls who came, who supported, or who cheered from a distance. You are the reason this festival exists!
Posted by Faith Dickey at 10:21 AM