Perks of being an ugly Rigger...

Last week I spent 6 days in Chamonix, France in the Alps. I joined up with Tancrede and Julien from the Skyliners team as well as Ingrid, to shoot an upcoming Asus commercial. Julien and Ingrid were the actors, and Tancrede and I were responsible for rigging and testing the lines. It was quite a relief to not be in front of the cameras, but the job was hard work nevertheless. The first day we slept in the lift station, waking up before sunrise in order to install 2 highlines near the lift station deck. The lines were unspectacular due to the proximity of the lift deck, one was hardly a highline being about 7 meters long and 5 meters high, however the other (see photos below) had a spectacular backdrop and in fact was a highline, about 18-20 meters long. One direction was to a sharp spire, and was quite exposed. It was a joy to walk. A medic on the scene was kind enough to snap a couple photos before the pretty people started acting ;) Finally after a week there we rigged 2 highlines by the lift station, a slackline, a beautiful alpine lake waterline on Lac Bleu, and a real proper mountain highline which involved a 3 hour hike over a glacier, sketchy loose rock climbing with a backpack, rigging in fog and cold, and then helicopter shots. It was a good week. 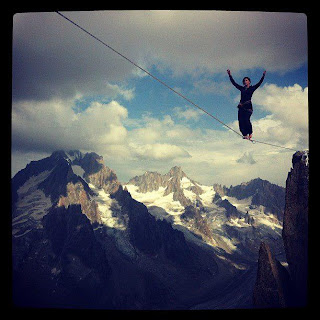 Getting the first ascent of "For the Money and the Bitches Highline" OS FM FA. 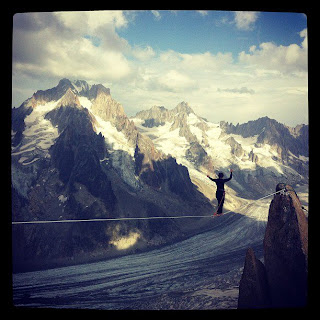