As the summer ended gracefully and the temperature drop blew in in the form of a gentle breeze, the team and I decided we had one last breath of a project in us. 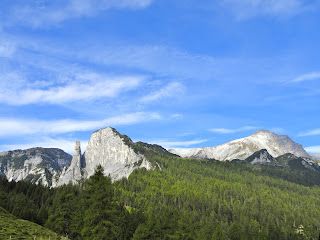 With the last minute help of Leki and Deuter, we rented a car and embarked with the original three, Janek, Jordan and I. They started in Berlin, swooped down to Ostrov and picked me up, and we sped along the first world highways through Germany and Switzerland. I had mistakenly left my driving license in Poland and therefore Jordan plowed through the 8 or 9-hour route alone. We passed through Lichtenstein on the way, and my high school dream from German class was fulfilled, however it proved far less romantic than a tiny country sounds since it is in reality a tax haven for the richer Swiss people. An invitation had been extended from the Swiss machine Bernhard Witz to join him and some others at the establishment of a new highline on an impressive freestanding tower. 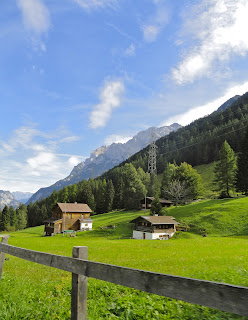 We arrived after dark, winding through the small roads of a valley wondering if we were headed the right way. We knew at some point there would be a restaurant where we could receive a permit to drive further up the valley, so upon crossing the first full parking lot we stopped. There was a motley crew of strange teenagers hanging around, and as we walked up to the building (almost a renovated barn) I started to think we were crashing a private party. Then came the “BANG! BANG! BANG!” and our logical brains, remembering we were in the Texas of Europe, realized we had stumbled upon a shooting range.

True to a cinematic experience, the guys working there were strange fellows and everyone looked as us like we “weren’t from around there,” but they gave us directions and we booked it before things got weird. 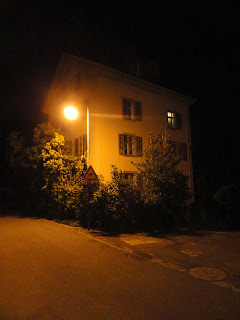 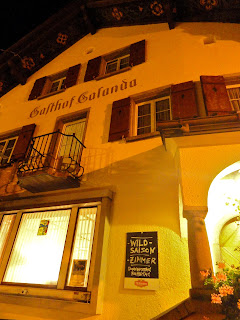 Up the windy road through the farmland and in between massive dark mountains, we stopped to pick up two young fellows with impressive beards and their semi-wet shepherd dog. They hopped in the back with me and lead us to the parking lot at the base of the way up to our destination. It turned out we were not really allowed to drive all the way up, but it seemed like if we went ahead during the night no one would find out, and none of us were keen for a 2 hour hike with all our food and gear, so we broke the Swiss rules (the gun range was far away by that point) and left our shepherd friends and headed up the dirt road. We finished at a large barn, and Janek and I pitched the tent on a small balcony of wood. Jordan found a room with only logs and wood inside and made it his bivy.

Our Swiss friends showed up early in the morning, but with six people it was evident they did not need help rigging. They took the gear I had brought (100m static rope and some web-locks) and headed up. The famously sleep-loving SWEL team slowly packed up, ate breakfast, and then began the short, steep hike in the direction our Swiss friends had left. At the top we found that the highline approach was a bush whacking, branch-cutting mission. Two fellows from TF1 french tv were there filming, and there was a crew already in the rigging process, so we enjoyed a rare experience of piggy backing. 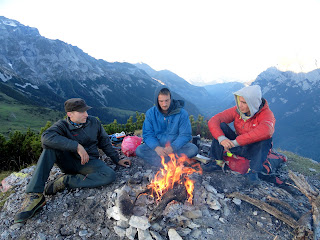 With a fire on top of the hill we stayed pretty warm during the bouts of fog passing through. When the sun came out I took a nap in a grassy knoll, and it felt like a proper vacation but with mountains all around us. 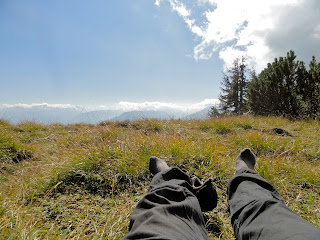 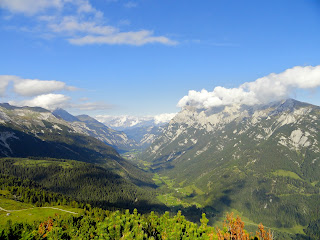 They finished rigging after dark, and we hiked back to the farm, then up to the hut with them. Despite having some sponsorship for the trip we were still dirtbag’s on a budget so we cooked on camping stoves and hung out on the porch of the hut, trying not to be intrusive at the expensive mountain hotel. It was drastically colder at night, and eventually we were ready to hike down to our empty farm and sleep. We found a room unlocked which was intended for shepherds, complete with old mattresses in a wood-lined room. Comfort and warmth! With our Deuter down sleeping bags, it was a cozy night. 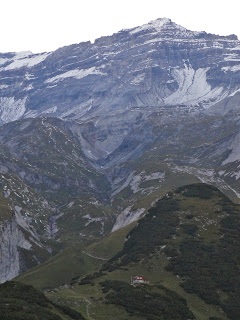 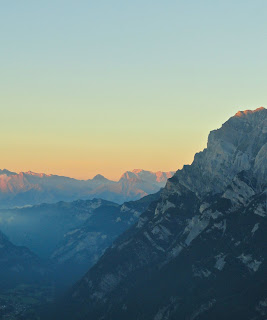 The next day was also quite relaxed as we gave the riggers time for trying the line before we arrived. 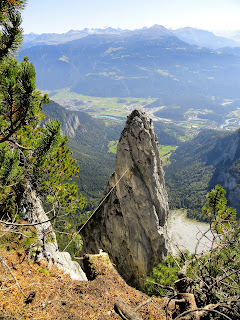 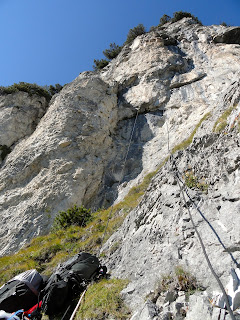 We hiked up in the afternoon, and finally after a few hours had the opportunity to rappel the 60-meter way to the line. It was not a large anchor to stay on, and it was important to stay clipped into the safety rope at all times as the crumbling rocks slid off the edges and would lead to a 120 meter fall. 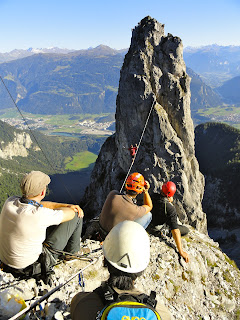 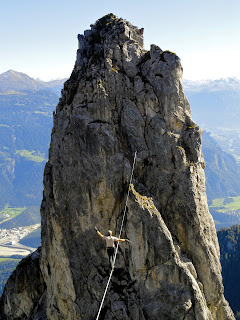 We all stayed perched on the nose of the anchor while Bernhard tried to complete his full man send. Finally as the day wore on he took a break for us to walk. I harnessed up first, and Bernhard begged me not to name the line something phallic (a joke I had been making about the tower). The line was not small, 49 meters in length and at least 120 meters high. It was not going to the top of the tower due to bad rock quality, so both directions provided optical illusions of rock walls melting together. I managed the onsight the first direction, but not without some shouting. The way back I was less concentrated, taking a quick fall after standing up, but repeating the motion and sending it. I happily bestowed the naming of the line to the riggers who had put the time and effort into creating such a highline, so it was called “Rostigraben” which is the invisible border in Switzerland separating French speakers from German speakers.

Jordan and Janek took their turns, sending in good style, but it was evident none of us were used to the core webbing, a heavy experience. 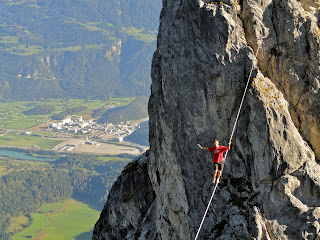 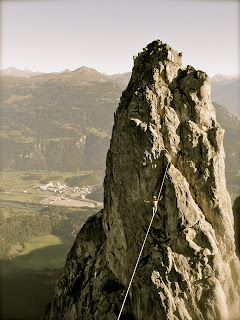 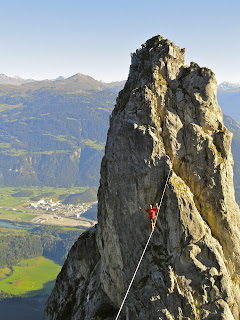 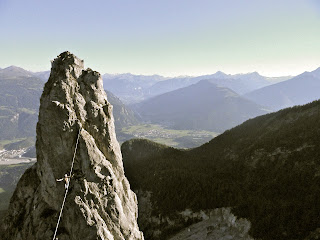 Bernhard spent some more time on the line, as well as Benoit, and the French TV managed to get their shots. At the end of the day I crossed with Benoit to de-rig, and though it took 3 rappels to get down, we managed to hike back up to the meeting point before the moon was high. Down to the farm, we parted ways with our friends (who went to sleep at the hut) and the SWEL team cooked a pasta feast, I made a fire, drunken hunters yelled garbled English at us from the balcony, and we enjoyed a last night together under the stars.

For a short trip, it was great and without any major complications. We were quite responsibility free for once, and thankful to all the riggers and Bernhard for inviting us. 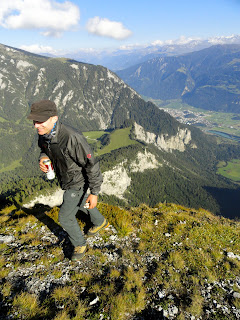 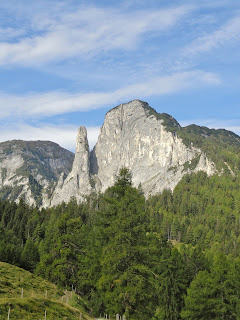 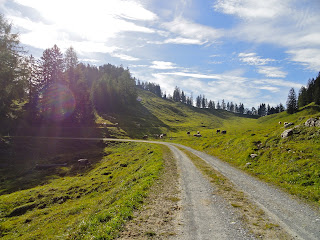 Thanks to our sponsors for helping make this trip possible!
Leki and Deuter