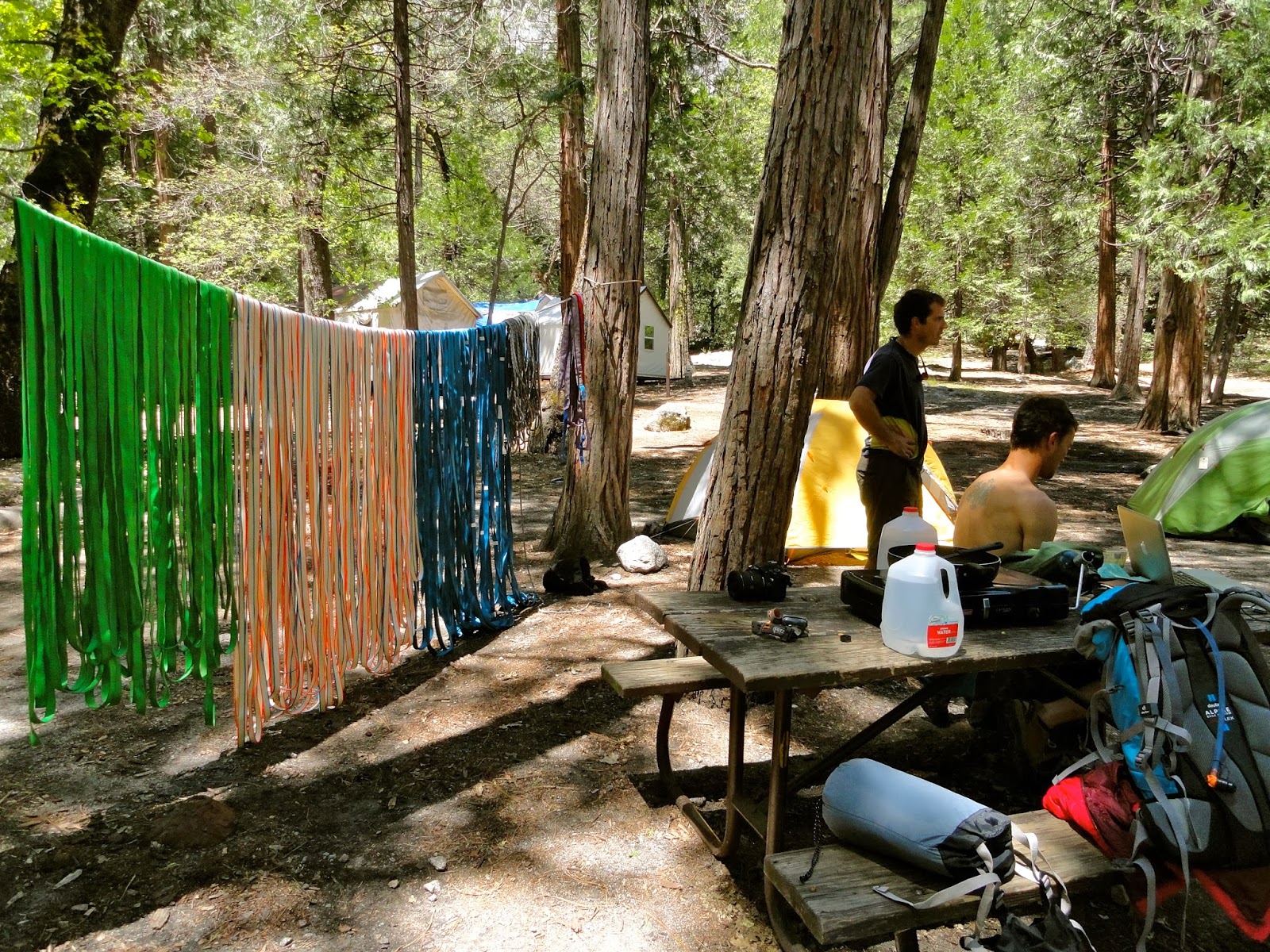 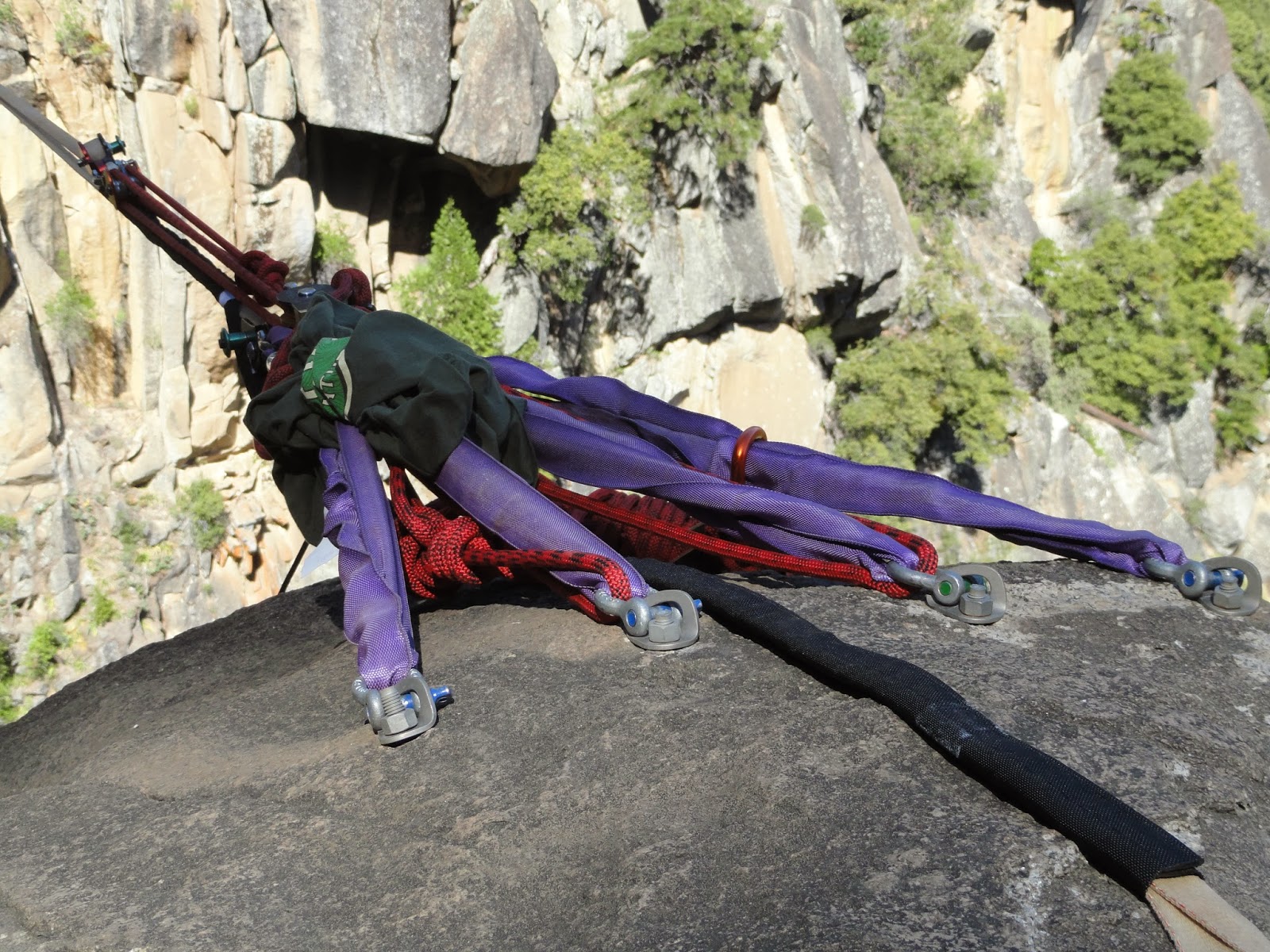 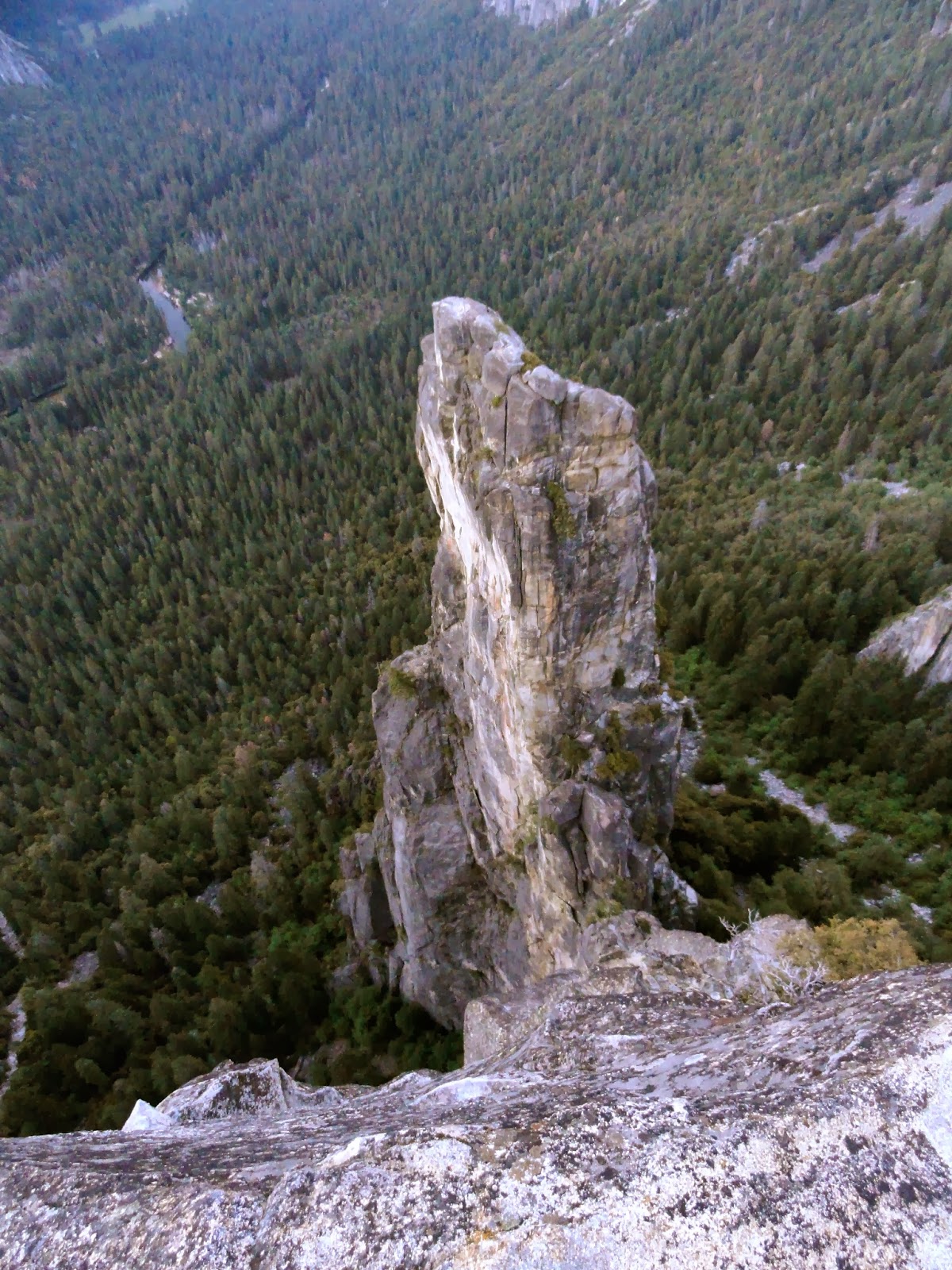 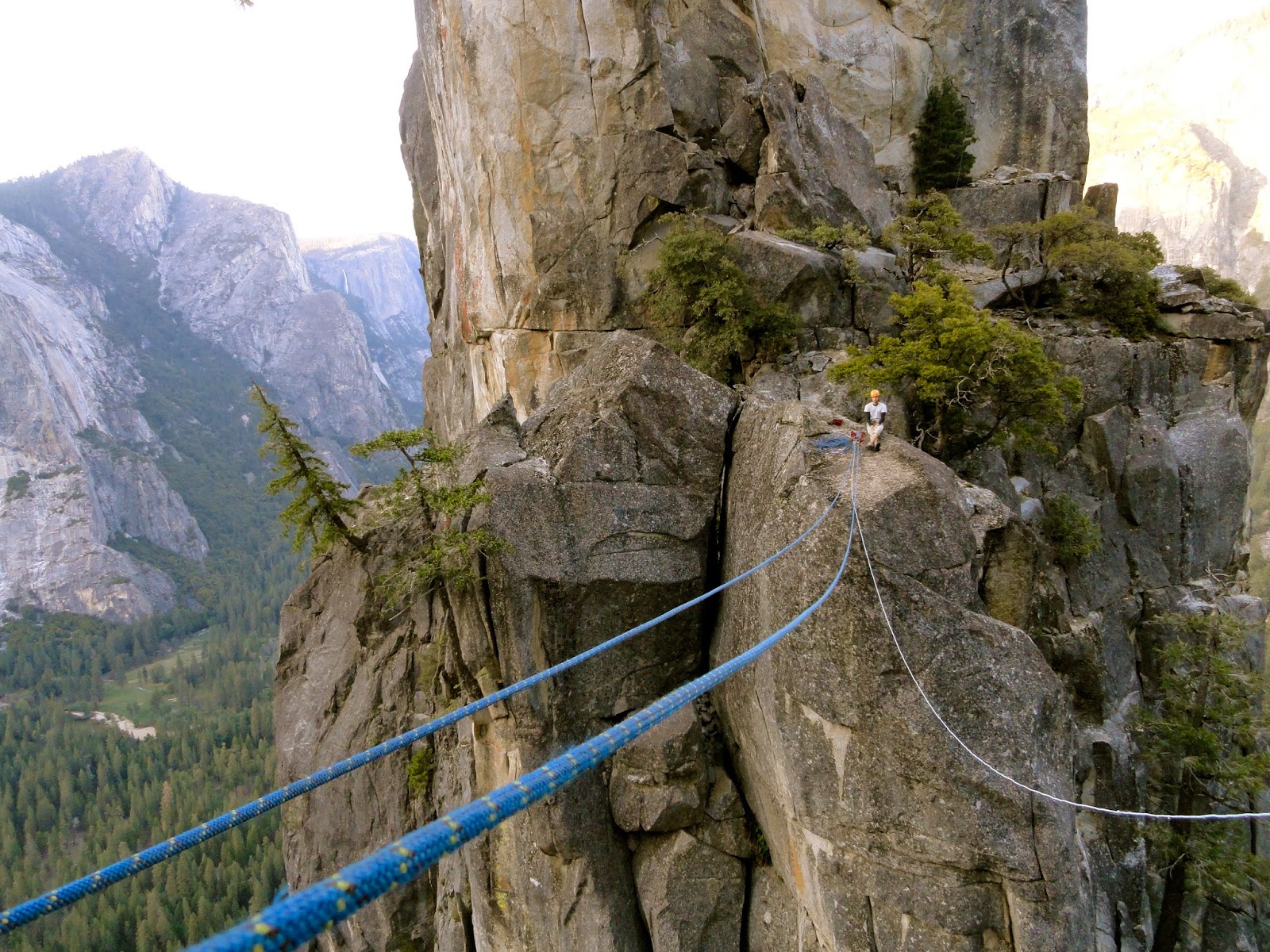 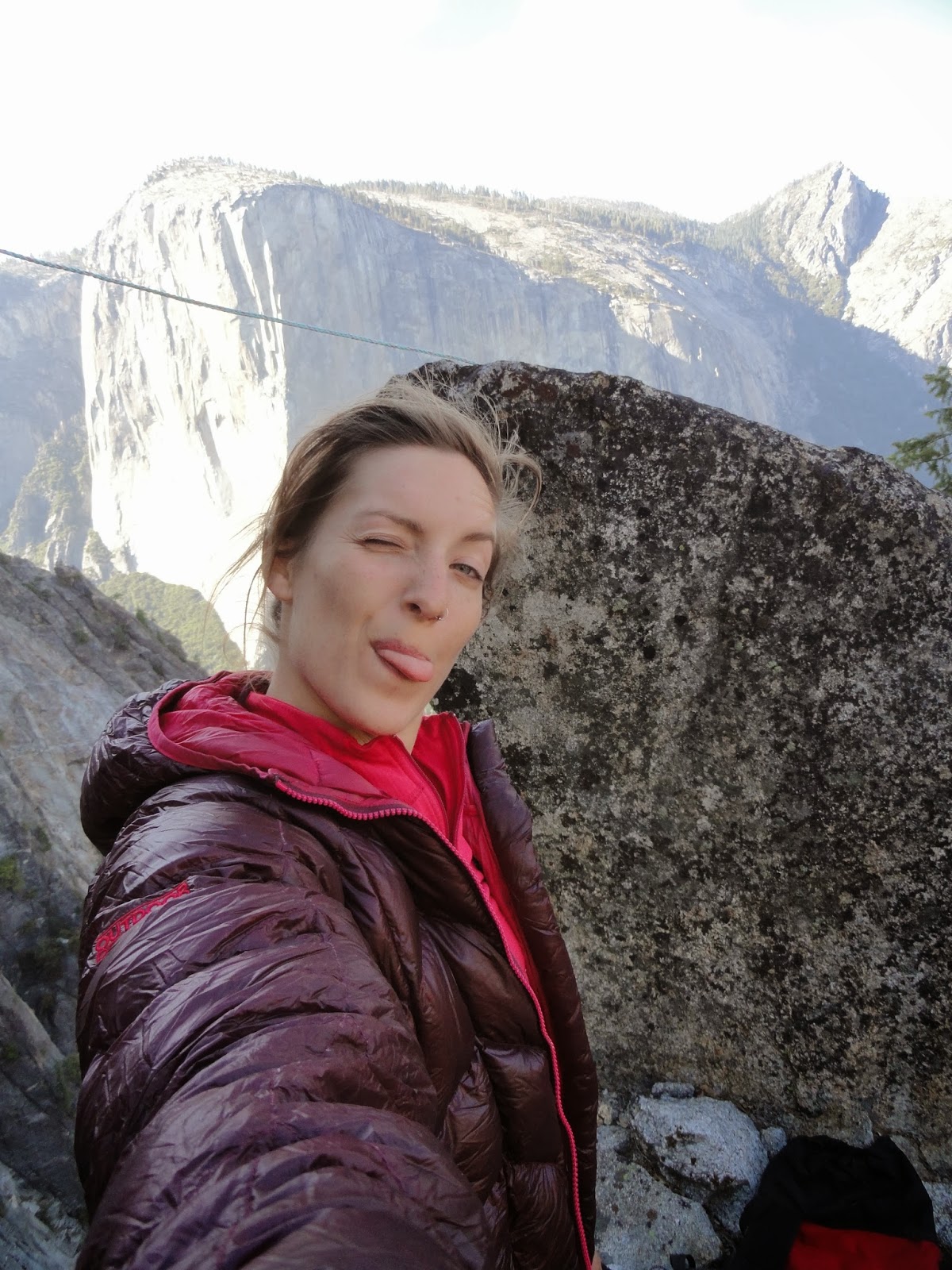 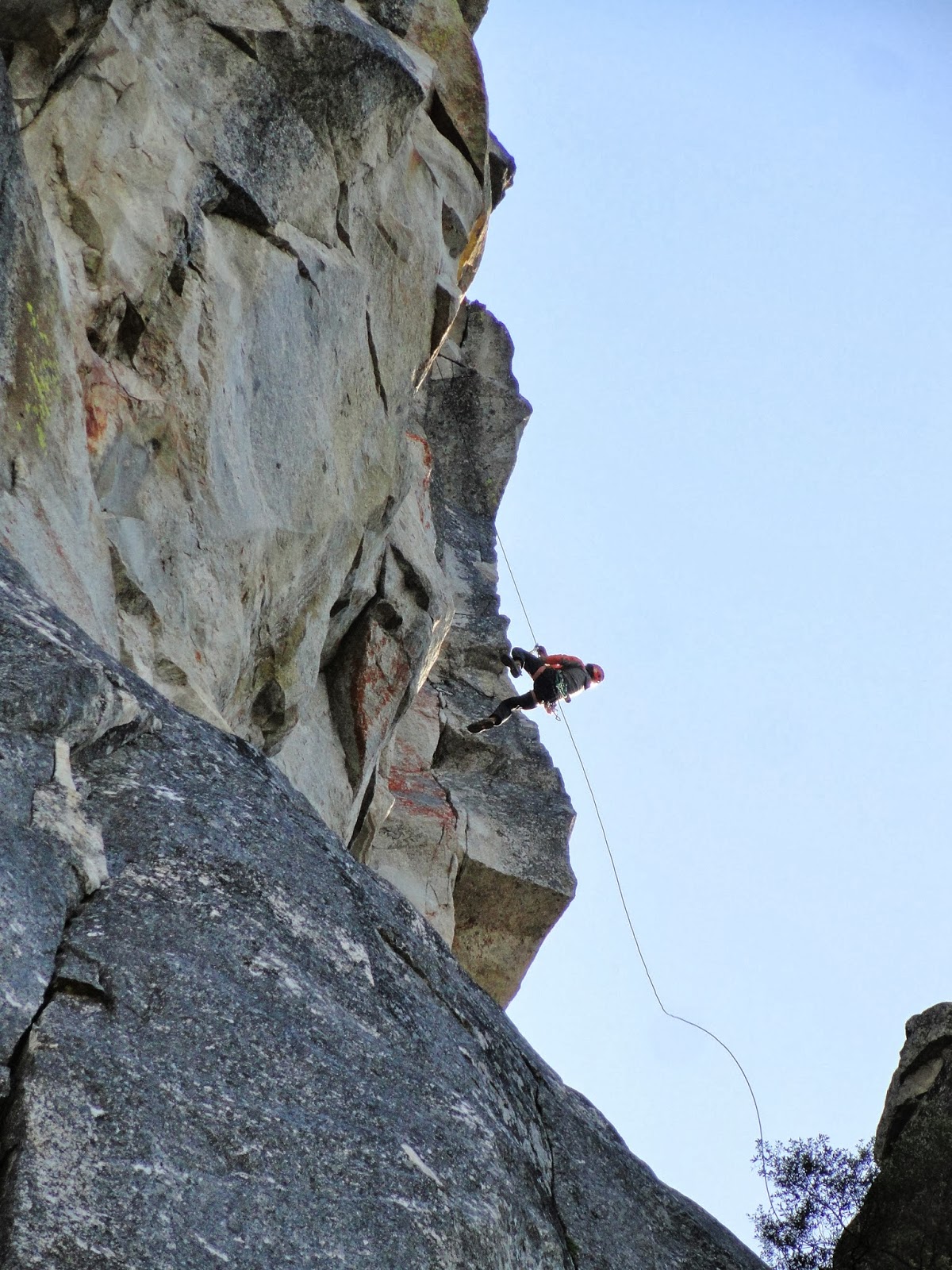 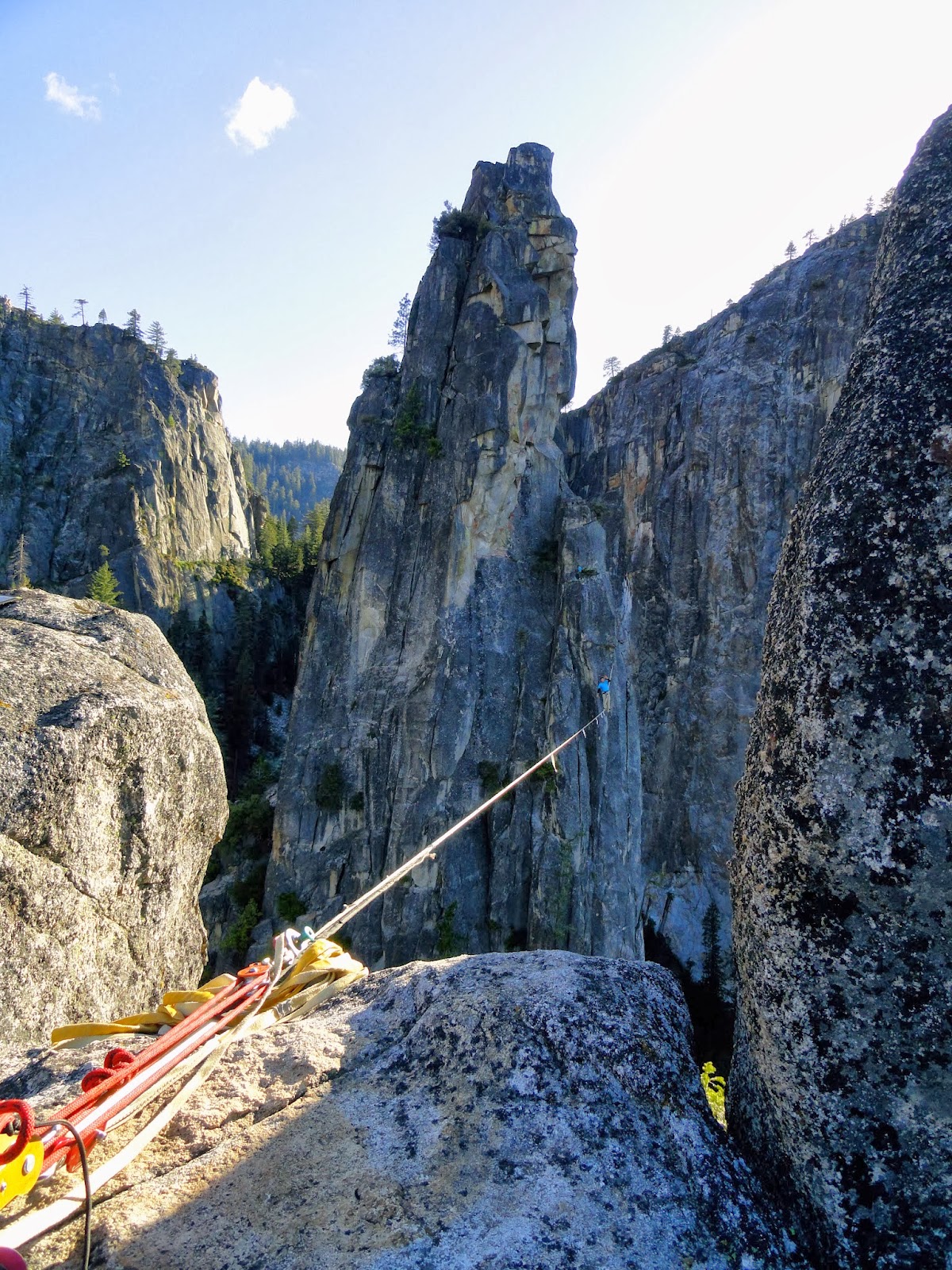 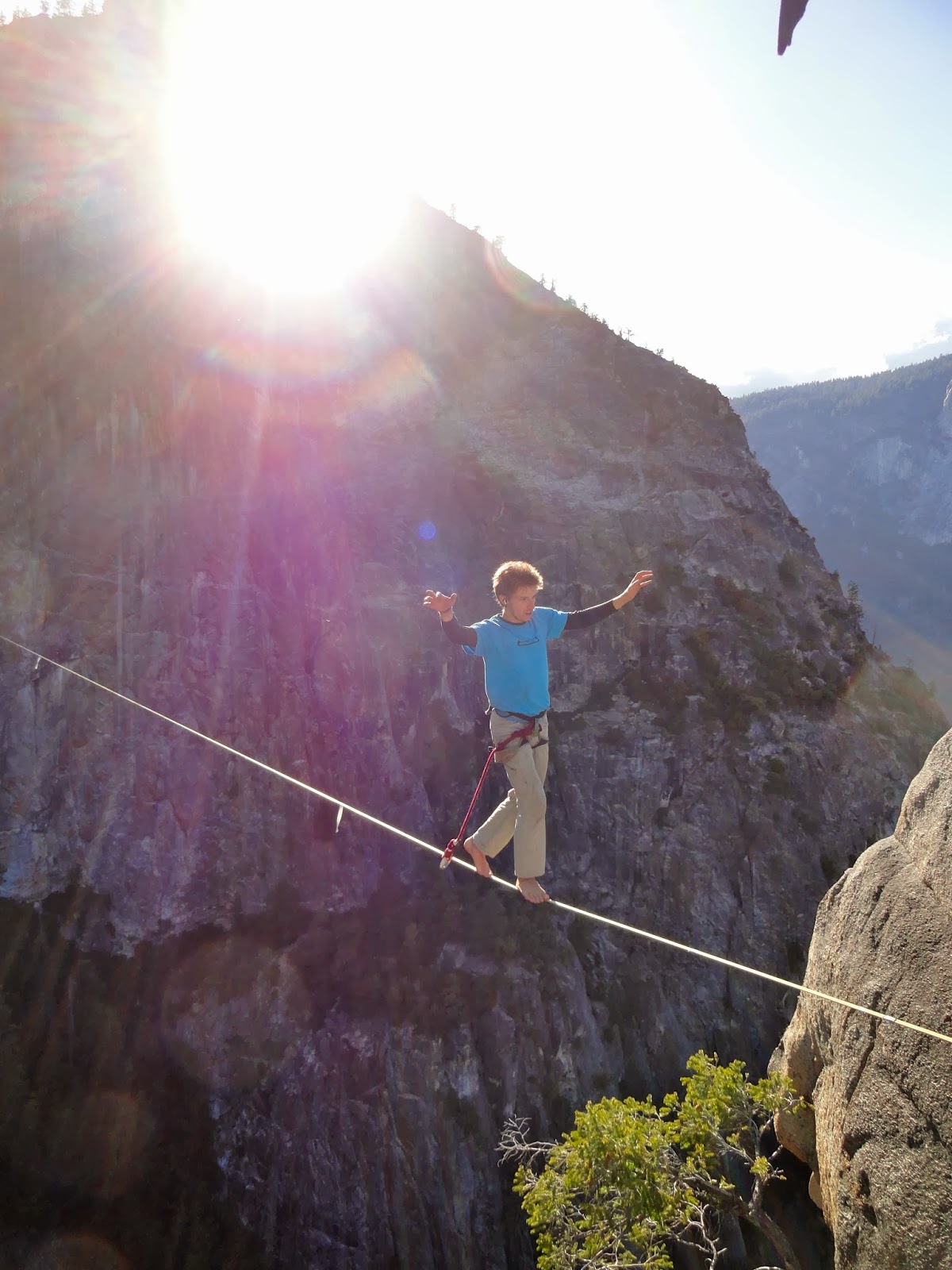 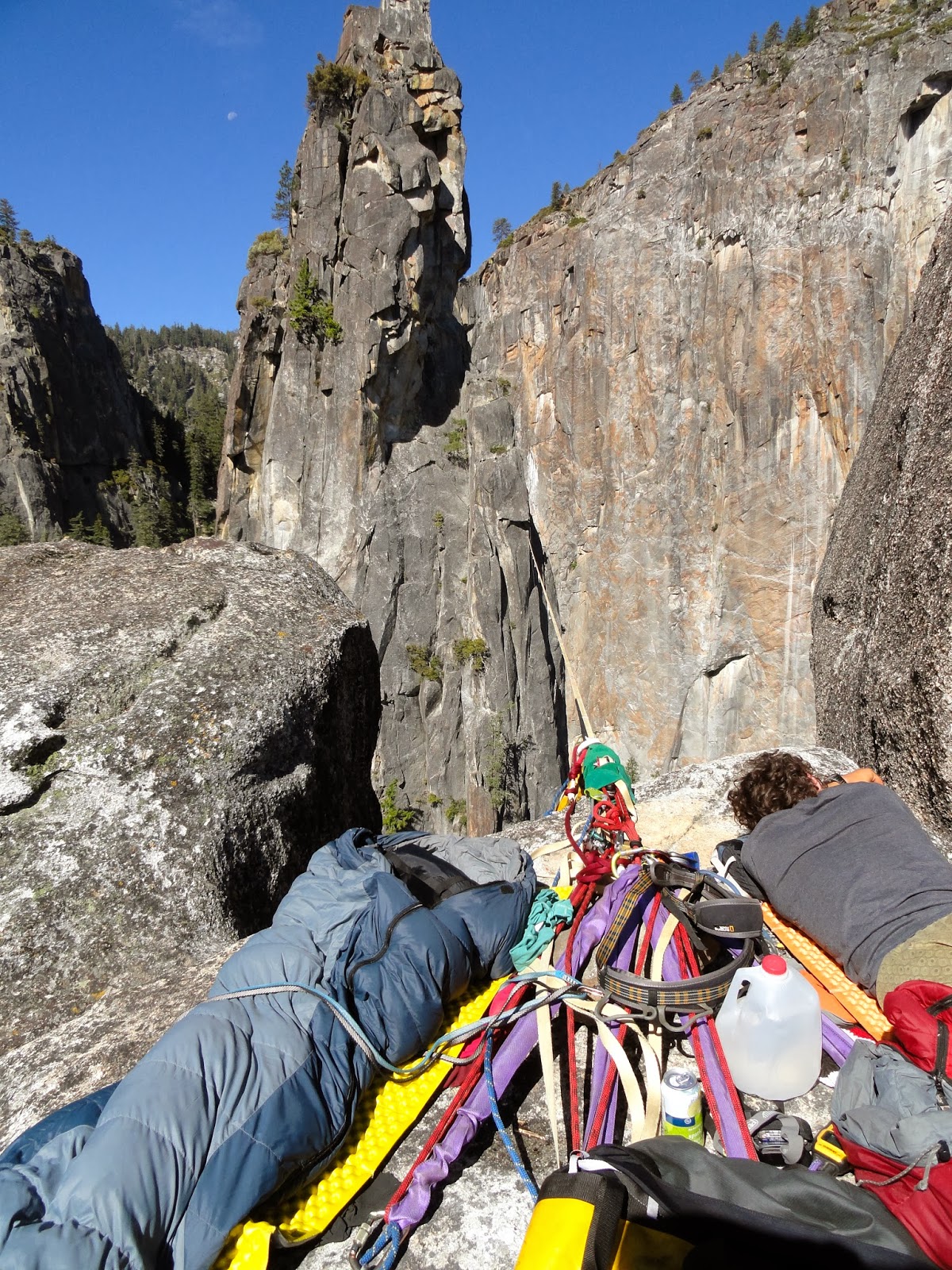 My trip to Yosemite was sudden and I shoved it into my life like a book wedged on an overstocked bookcase. My SWEL team members Jordan Tybon and Jan Galek had come to US later than our normal course of action, and after a skydiving excursion in Lodi we conjoined in Yosemite to revisit old lines and walk some new. Naturally we revisited the Lost Arrow Spire, though the situation quickly turned into a cluster of people once a facebook event was created and soon we were overrun with nice people, but a body is a body and it takes up time and space. Nevertheless, we made the best of it. 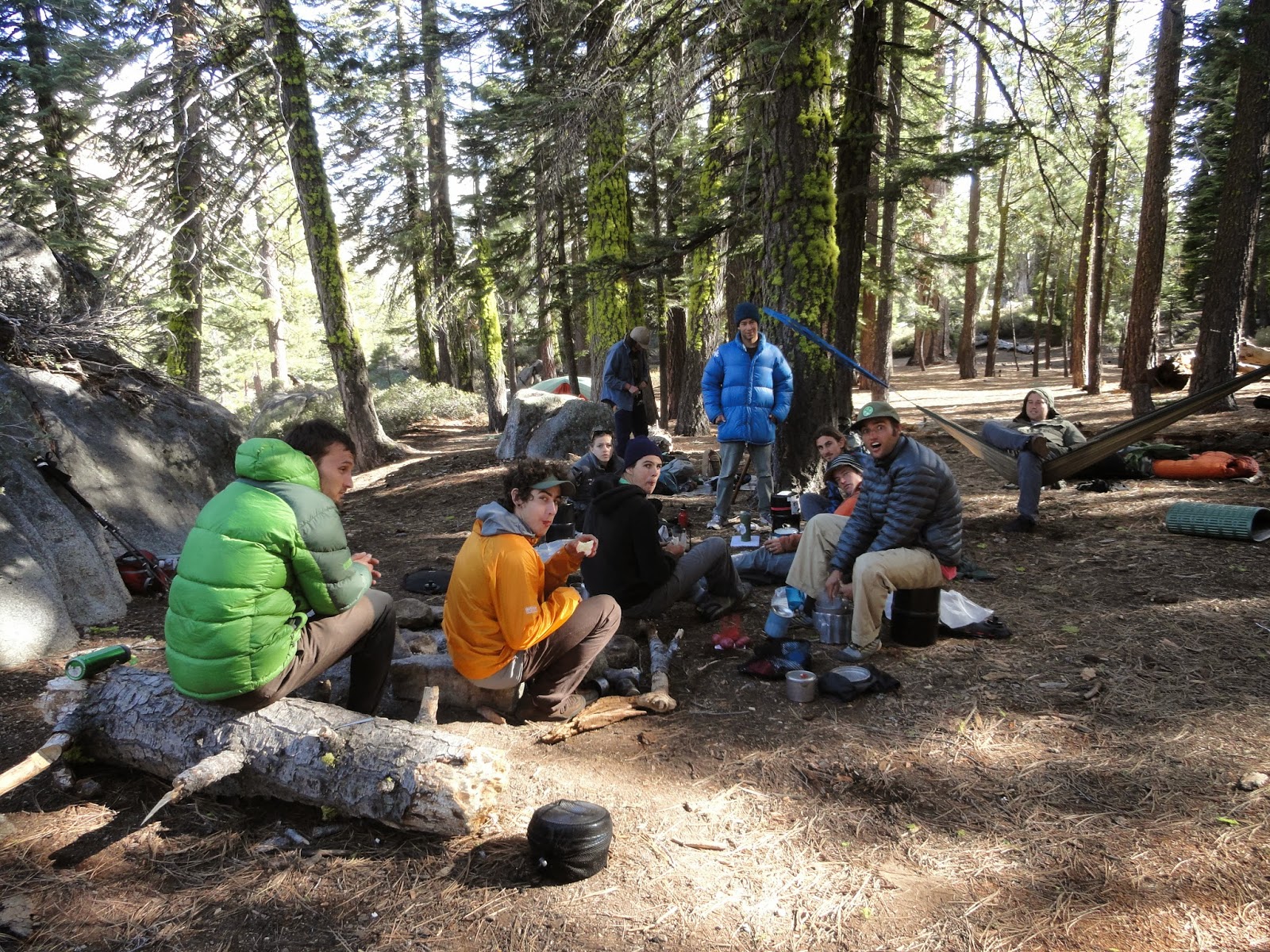 The weather treated us well though the usual upward drafts under the spire were unavoidable. Though this line is still my solo project, this trip was not a solo mission and my headspace was not one which supported a lack of security. I donned a swami belt to step up my previous send by a notch, and confidently walked both directions. The LAS line is so small (55ft) but demands so much respect, with 3000 feet of perceived exposure, the wind, the rappel to get to the anchor, and the rigging which is on cams on one side. That line has humbled many an experienced highliner. Besides my own send, I was able to see my lover Andrew Craig walk the line for the first time, a wonderful achievement for him as that line is so iconic.

We had planned to hike the brutal Falls Trail and walk the Yosemite Falls highline, which Janek had redemption plans for and Jordan and I had never set foot on. Our friend Jared and Preston Alden and Max Silver were atop, and though the clouds were foreboding we hiked on to find them. Upon arrival at the top, though sweaty and tired from the almost 4 vertical mile hike, we went straight to a rigged Falls line. This line, though less iconic than the LAS, demands even more respect. One anchor goes to a small nose, so upon approaching the highliner is looking straight down several thousand feet to the valley below. There is no easy step off on this line. Our friends were nowhere to be found, but Jordan and Janek had both hopped on and sent by the time I reached them. The rig was on double vectran, which should have been easy however it was so low tension that we could pick up the anchor and pull it a foot towards ourselves. Nevertheless, the storm was approaching and it was our only chance. I through on my harness over my OR softshell and went for it. 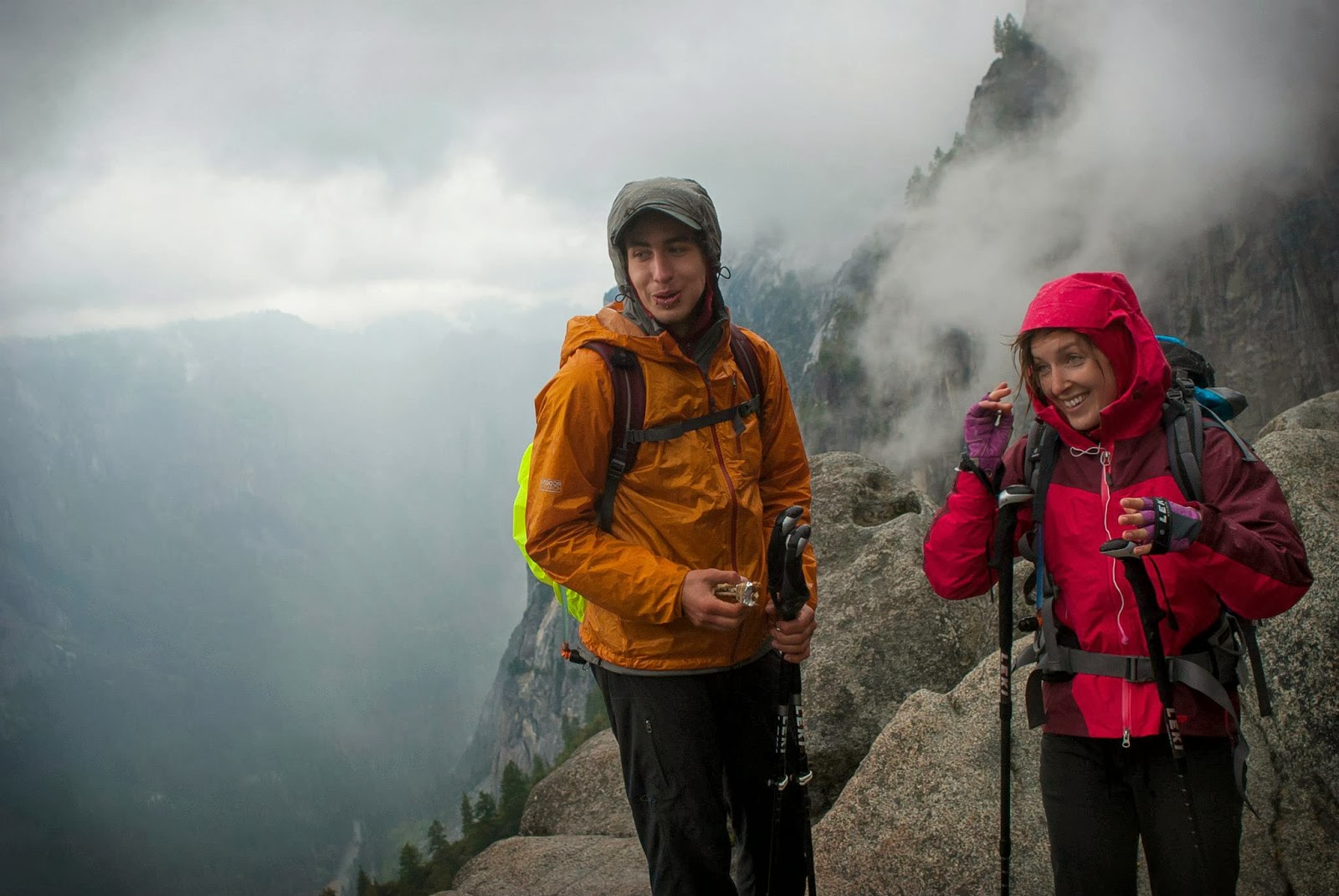 Vectran is a very low stretch webbing, so I had to step very calmly and keep the line as still as possible. Soft flecks of rain had already begun to fall, but this line had been on my to-do list for years and I was determined. I tried to focus on my breathing and my technique and avoid thinking about the massive space beneath me. I could hear the waterfall below pouring off the edge into expansive mist, and I could feel the gusty breeze picking up in energy as the storm gathered in the valley. I reached the other side, leaning forward to touch the rock nose that the line was anchored to, and I probably let out a small shout of joy. On sight! I was very aware I didn't have much time to rest, so I quickly scooted out and returned, more confident on my return walk. Stepping onto the anchor I pulled out an earbud from my mp3 player and heard the claps of thunder. Immediately hail began to fall. Good timing! 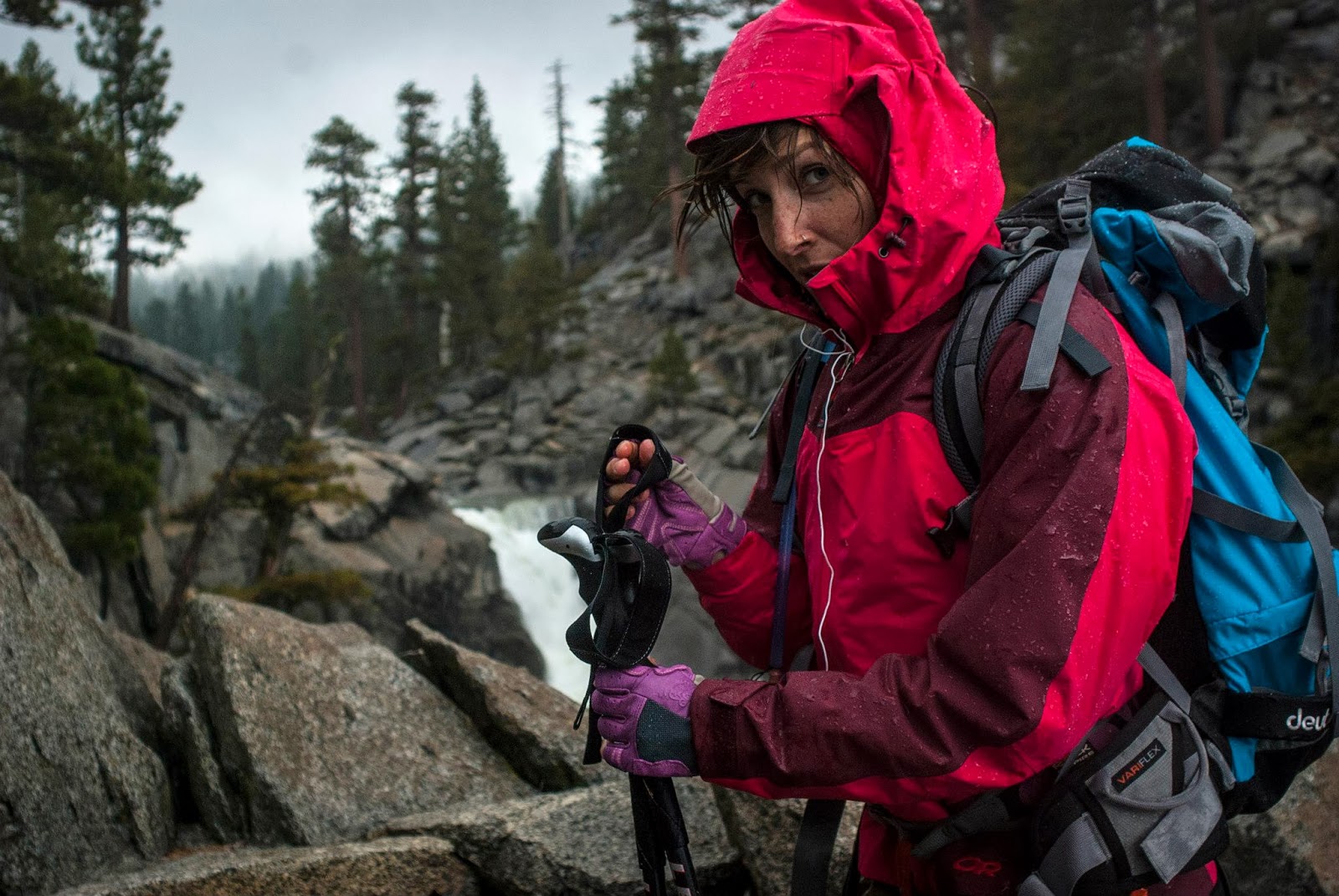 My team and I quickly gathered our Deuter packs and scurried up the steps back to the camping area. We found a tent and a tarp in the trees, and since we had seen no other campsite, figured it was our friends zone. Ten minutes later a group of strangers showed up, as we kicked it in their camp living room. We apologized awkwardly, and left their site. We looked around a bit but could not find our friends so we decided to descend back to camp 4 where we could be dry and warm. The storm was short but it managed to get us decently wet on the hike down.

Another few days was spent at the beautiful Taft Point. There are three established highlines there, and they happen to be the easiest approach/rigging you can find in Yosemite. There are few places on the planet as scary as the valley exposure wise, and even these highlines which are all rigged in alcoves have their exposure factors. 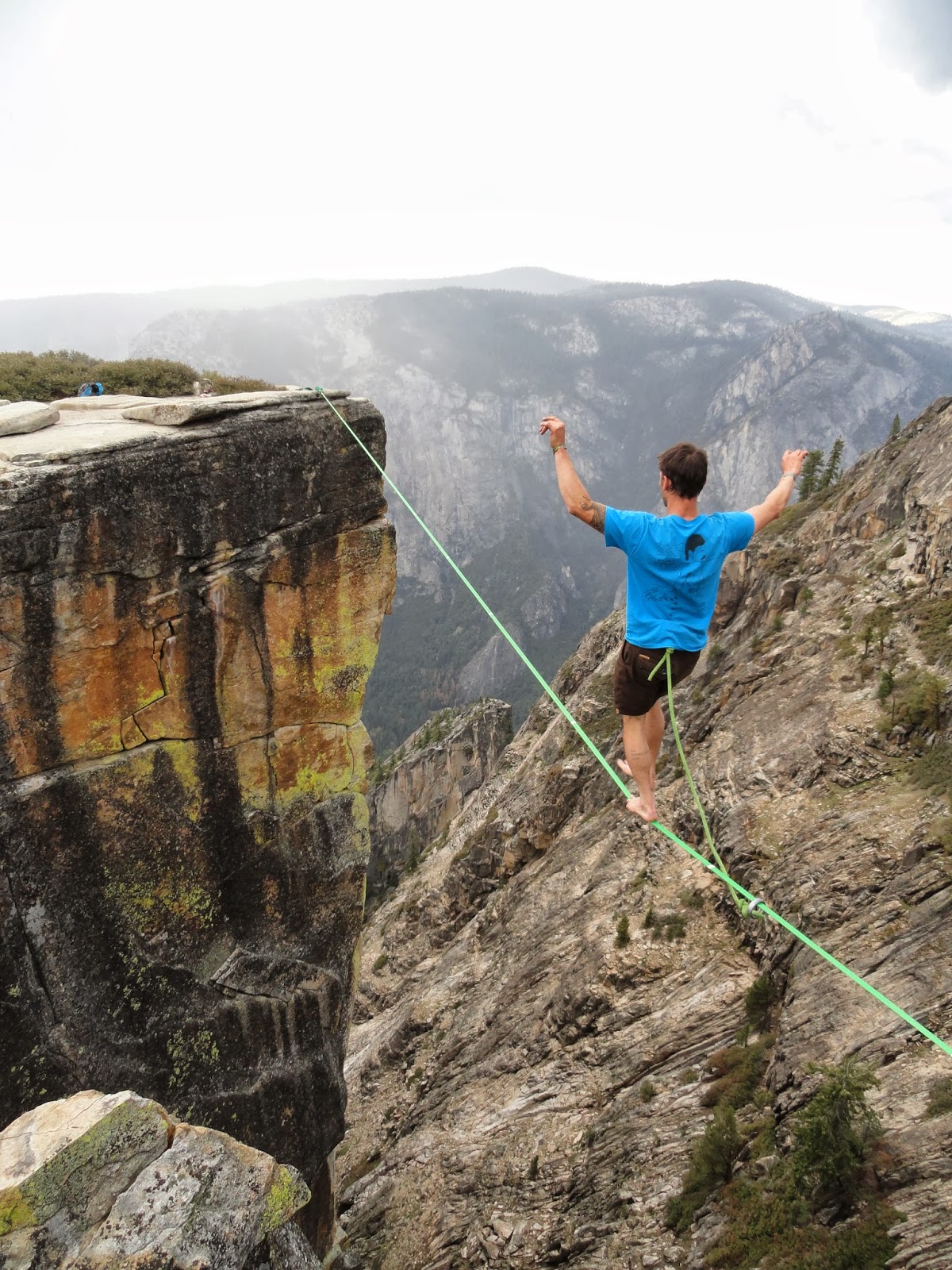 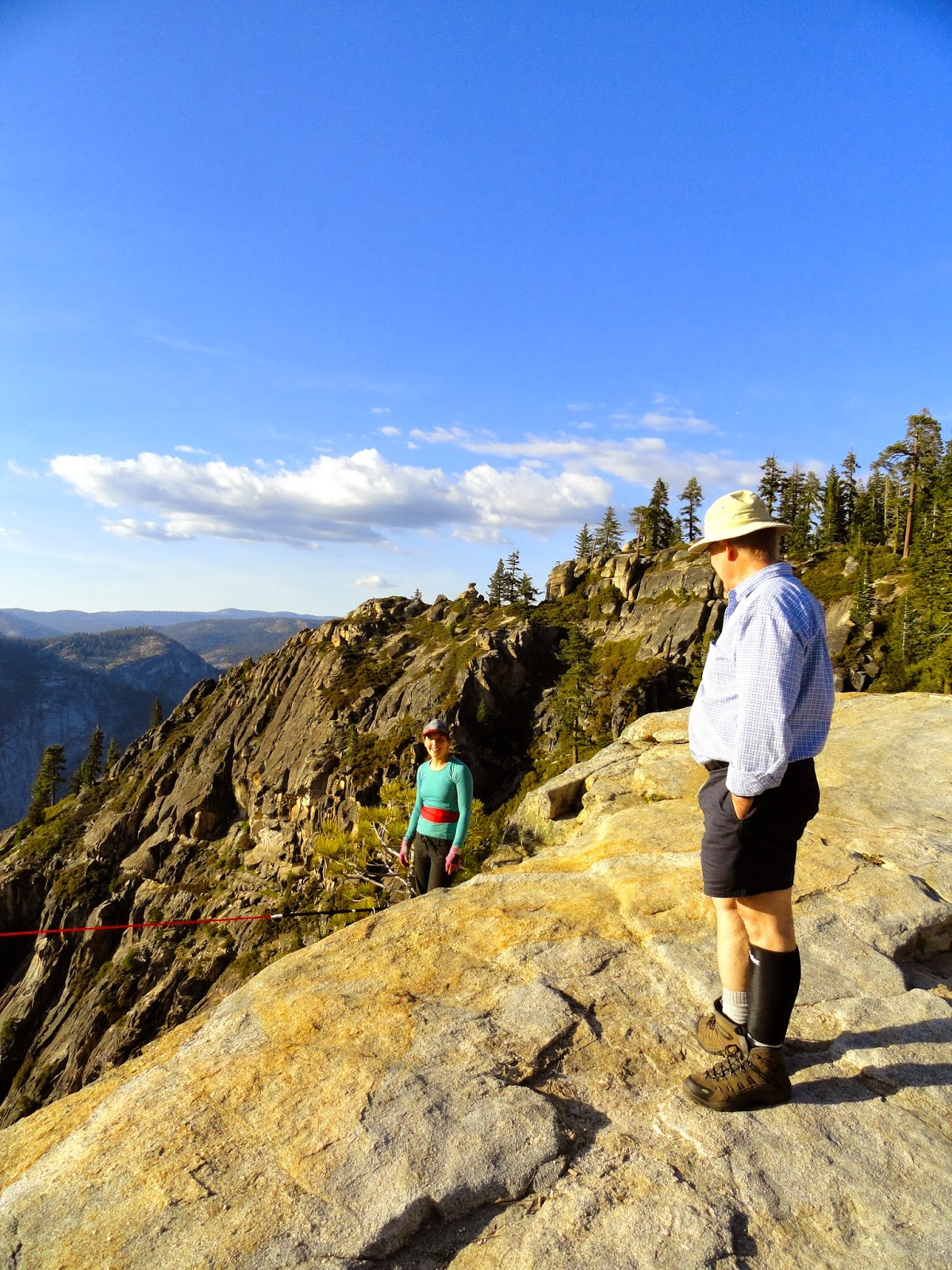 We set up the 20 meter and 35 meter long lines on one day, and sessioned them in the sun. The rigging is easy as they are bolted and one must just walk the line around the alcove in order to get it across the gap. The trade off at Taft is the amount of Tourists who hike down to the view point there, and so every hour I ended up talking to at least 3 kaki-clad photography enthusiast who wanted to know about our "tightrope walking." Sometimes it feels like work to discuss why we highline and what it is, other times it is a golden opportunity to educate someone on the deeper, more meaningful reasons behind what we do. Andrew was also in Yosemite at the time, and got to walk 2 lines he'd never been on before. 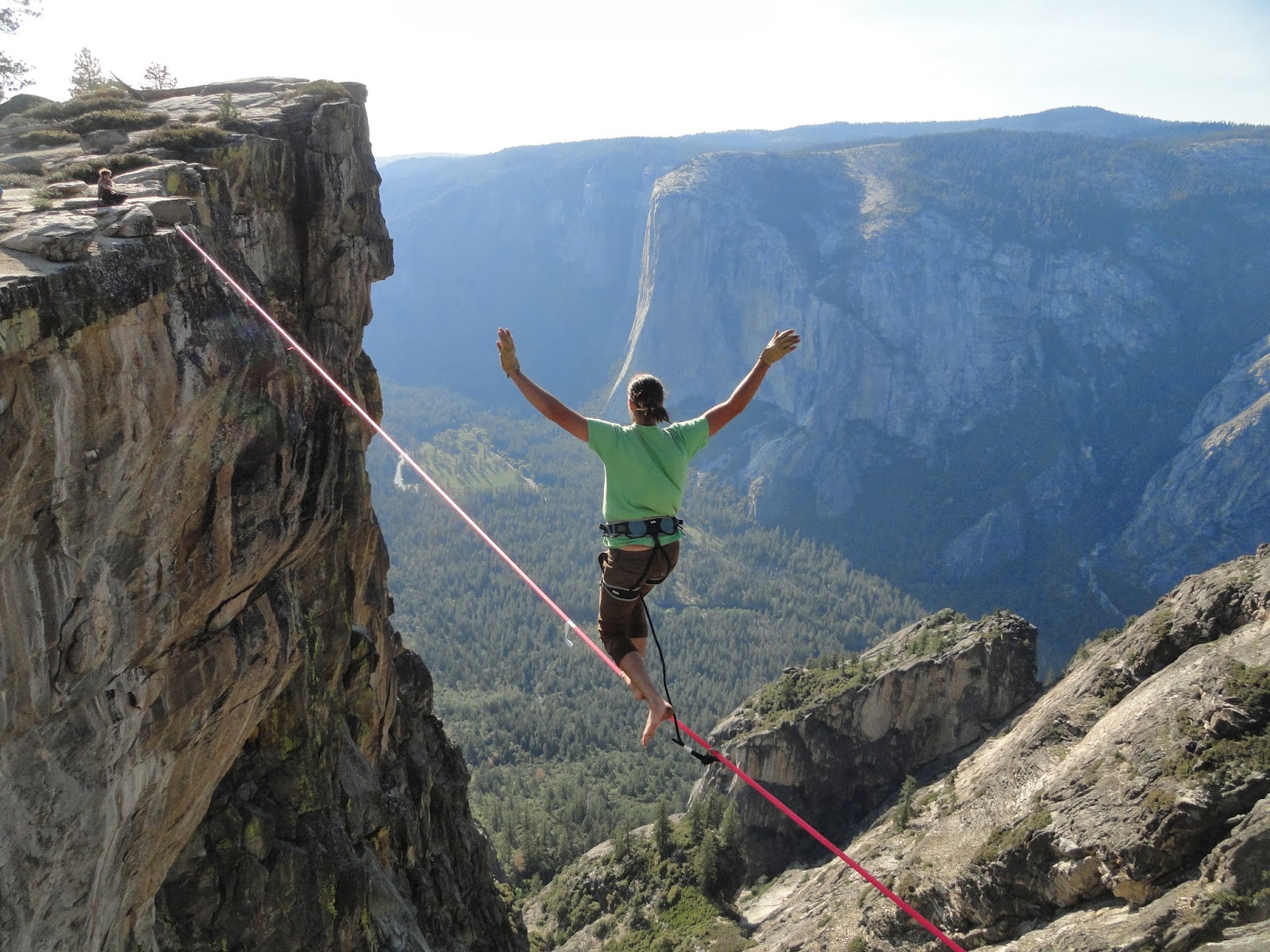 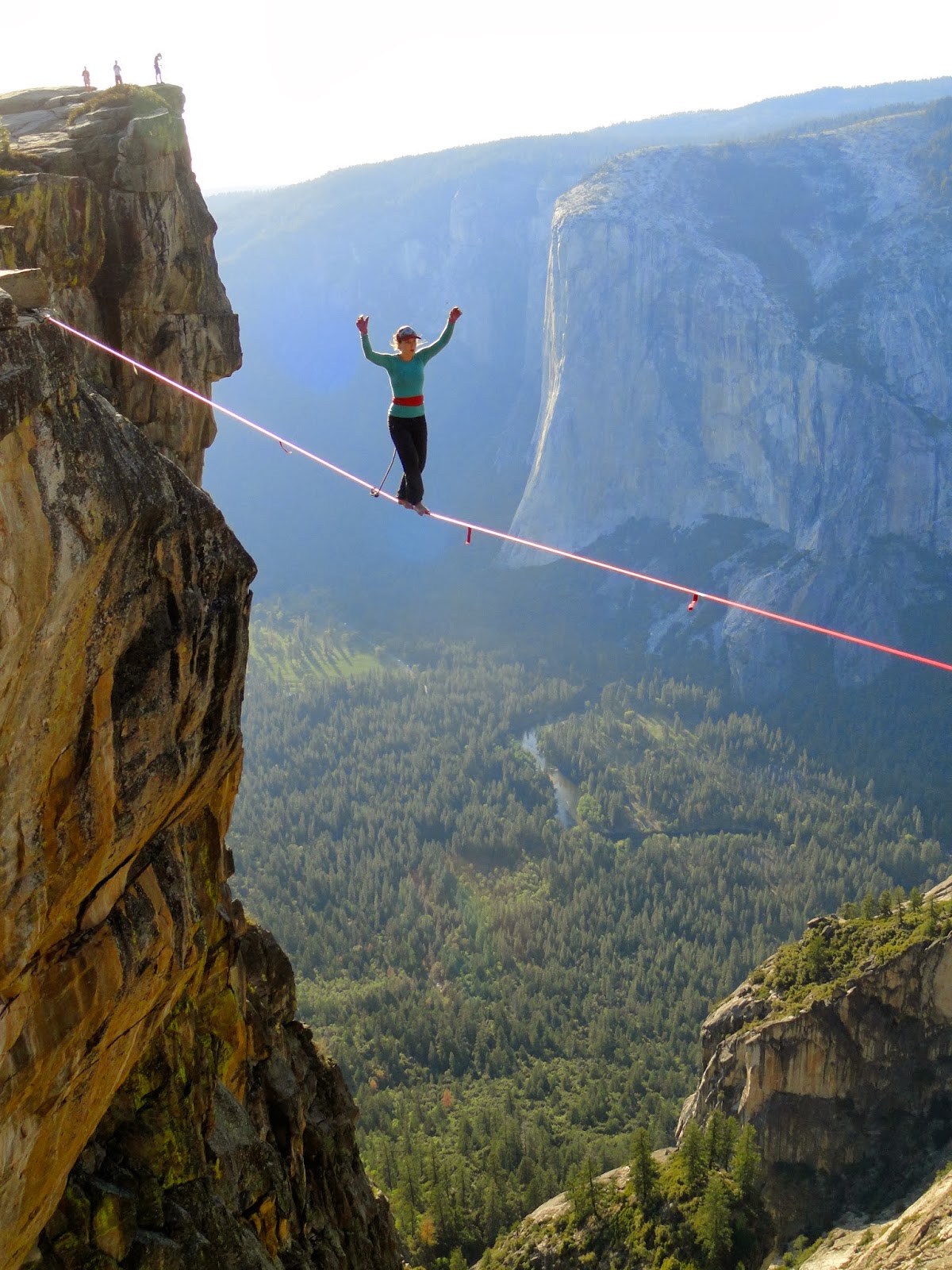 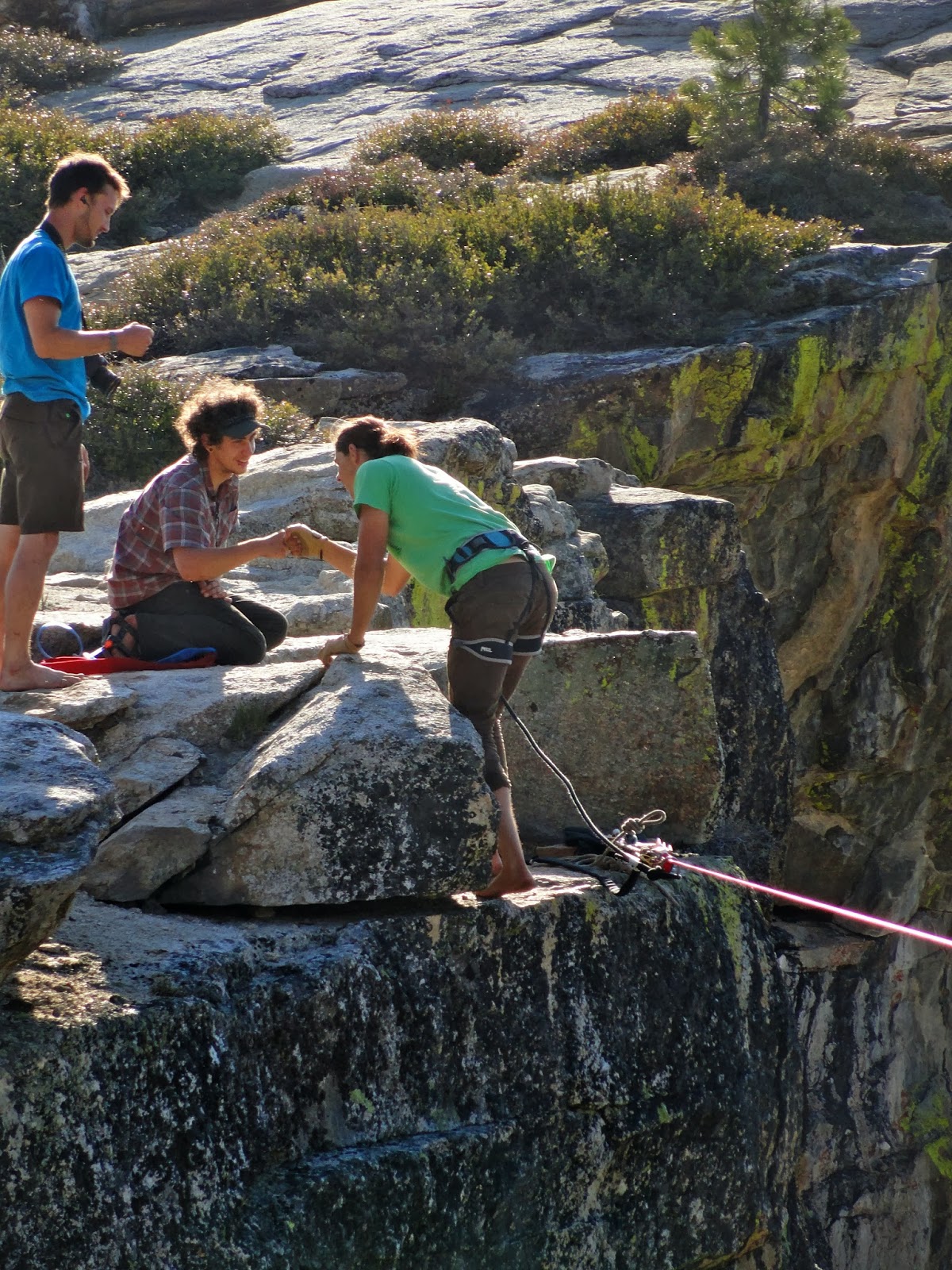 I sent the lines in the best style I could, trying to get used to that Yosemite exposure I hadn't been around for the three years prior. Crows glided through the air, and the infamous El Cap loomed in the distance. We returned another day to rig "Spiders eating Eagles," a beautiful 170ft line established by Jerry. We rigged it on double webbing but it was still a challenge. After a few steps I felt totally out there, very alone with my body and my mind. In the end I was able to cross all three lines OS FM. 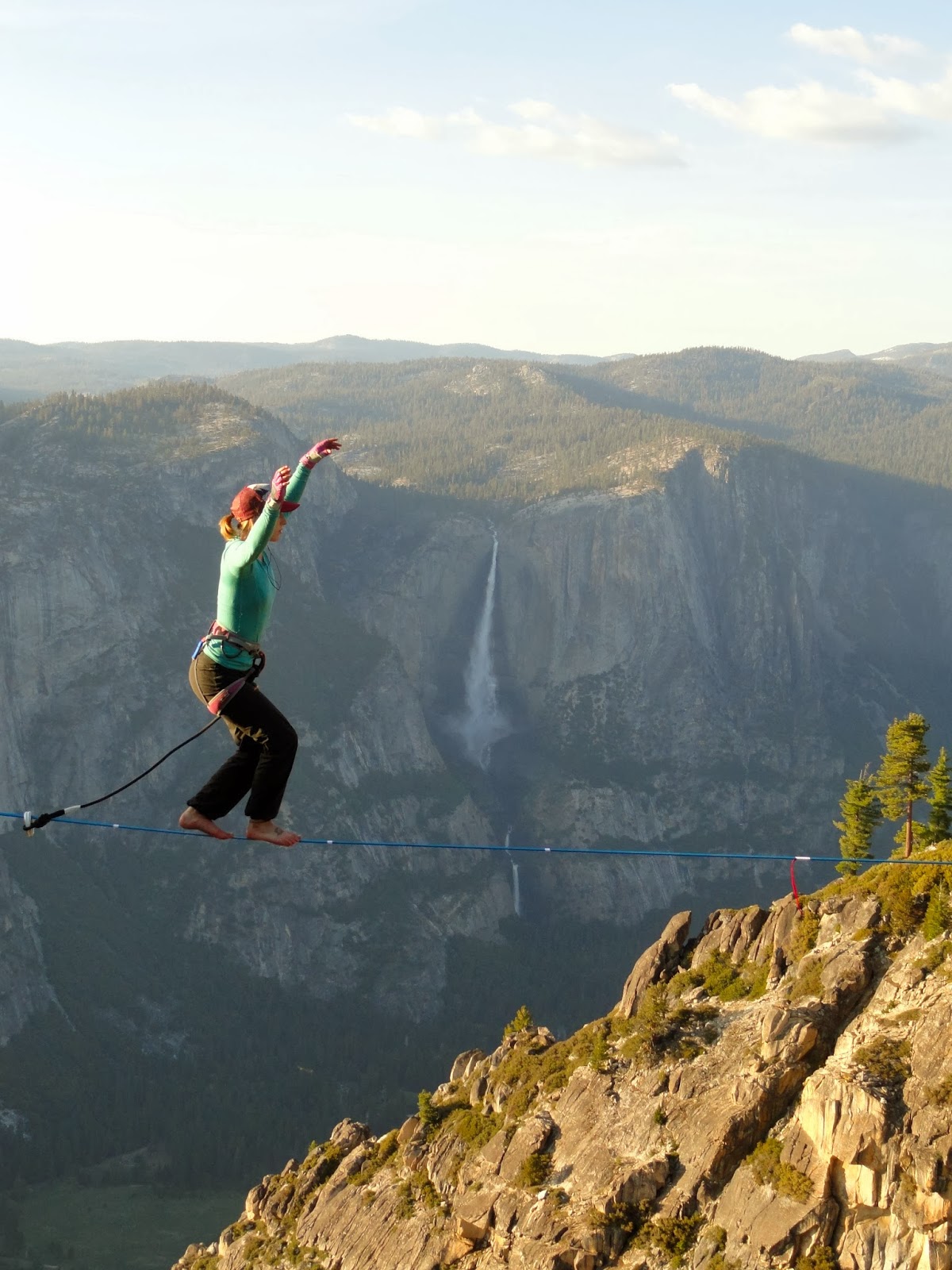 The next part of the trip is difficult to write about as it was so exhausting that my mind attempts to block it out as I type. Establishing a new highline in Yosemite might always be a beastly task, but establishing the 106 meter long highline "Hubris" blew everything I'd done out of the water. Our team had been eyeballing the Cathedral Spires in the Valley for weeks, and Janek had acquired all the beta necessary to get on top of them.