SWEL team finally was able to begin skydiving. It was years in the waiting, however we all met in Lodi, California, at the infamous dirtbag dropzone (the cheapest place to get your Accelerated Free Fall license) and started the new chapter of being in the sky.

There is a mandatory tandem jump, so we all paid up, strapped onto the bellies of our instructors, and rolled out of the plane. It was my first skydive ever, and actually after the tandem I was unsure about pursuing skydiving at all. Due to being on the belly of the actual jumper, the wind was full force in my face, penetrating my goggles and causing my eyes to water. It was uncomfortable to be completely out of control, and the canopy ride was the most fun out of everything. As soon as we landed, Janek, Jordan and I marched up to Bill, the owner, and paid for our AFF courses.

He gave us the reading material along with 3 DVD's about skydiving, instructing us to read the book about 12 times and watch each DVD no less than 3 times. This was an ambitious goal, as I soon found out. I had little time to soak in the full information, but after one day of studying we started our course.

It all seemed difficult and freaky before actually jumping, and in the first 5 minutes of ground school (which only lasts 2 hours at Lodi) Bill cruised in and told us 2 out of 3 in our group would fail the test. He dislikes climbers, which was bad news for us since we did not hide the fact that we were all climbers and highliners. 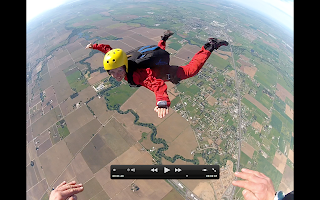 The first jump out of the plane was like standing on a cliff before a rope jump. Theoretically I knew there was little to fear, and yet it was a new sport and I was scared to fail the test. My instructor was a big bald Russian named Victor, who though intimidating, turned out to be an excellent teacher. He had a fast and rough method, already chucking me out of the plane alone on the 4th jump. My first jump was stressful and I was far too tense, causing a spinning motion that was difficult to stop. I was confused by the symbols Victor showed me so this added to my stress levels, and by the time I slammed into the ground with a poor landing, I was sure skydiving was not cut out for me. 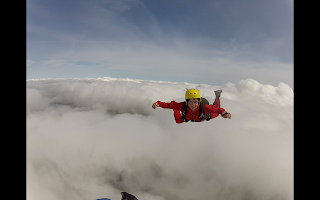 By the 4th jump, however, I had gained some idea of what I needed to do. Symmetry of the body was important, and relaxation. If I treated the rush of air more like a pillow rather than potential death, then skydiving could be fun. I also started diving out of the plane door rather than holding the bar, swinging my knee and turning my belly to the relevant wind. Diving felt better and more natural. The next day I finished my last 3 jumps to pass the AFF, with Victors wife, Katje, as my instructor. I practiced becoming unstable to stable, backflip, rotations, and finally had one decent landing. I was stalling my parachute too high on almost every landing, and therefore crashing to the ground on my feet or tail bone. This becomes easier with experience, however I still panicked just before my feet touched the ground almost every time. 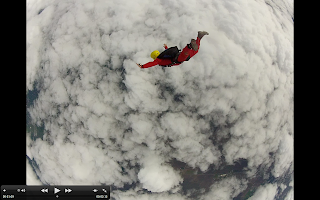 After passing the AFF, I had time to jump 5 more times before I had to leave Lodi. An unexpected death of a very close friend brought me back to Texas, and so I set aside becoming an experienced skydiver for a later date. The 5 jumps I did independently felt great, though I began to realize that highlining is still way cooler than skydiving. I hope next time I can jump with friends, learn to pack, and practice more tracking. Overall, I realized that skydiving is harder and easier than it appears.