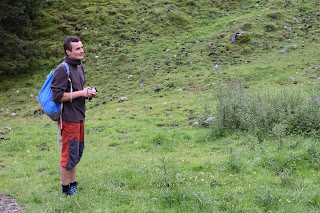 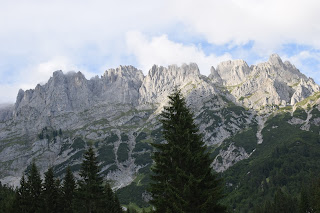 An old friend from the old school highlining days contacted me out of the blue to go on a climbing trip. Never one to pass up a chance at seeing old friends, I agreed. Damian Czermak, from the original USA highline expedition way back in 2009, arrived in Ostrov like a sudden rain cloud in his old, gray Fiat. We threw my backpack into the back and began the 10 hour journey to Austria. We arrived in the night and in the rain. We wound through small roads until we were in a forest, where we pulled off at a wet turnout and set up the weirdest tent I've ever seen. I had a shiny, light Big Agnes tent in the car, but Damian's was bigger and he volunteered it. It has strange vents that looked awfully similar to sea slugs, and did their job very well when in the middle of the night several liters of water poured onto my sleeping bag and I. In the morning we awoke to an angry Austrian yelling at us that we could not be there. I answered that we arrived late in the night, but the angry voice cared not and berated us in a thick dialect. Finally they left, and I crawled out of the flappy old tent to move the car. Later, Damian and I discussed it being either a ranger or just an asshole who wanted to disturb our sleep. 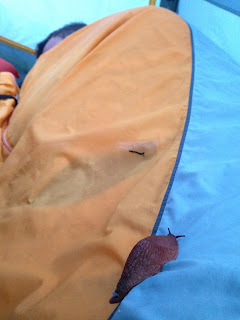 After just a few hours of sleep, our day was dedicated to shopping for food and finding our parking spot/campsite. We packed up the soggy dwelling and headed to Kitzbuhl, the richest and most quaint village I've ever seen. The streets reeked of money, and spoiled tourists perused it wafting off the scent of expensive perfume. Damian and I were clearly out of place in our dirtbag climbing clothes, but we enjoyed the ice cream and walked around getting our bearings. 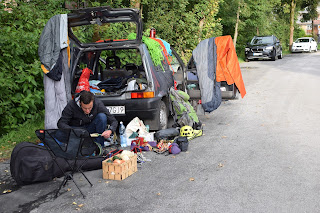 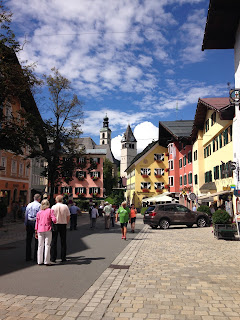 Eventually we drove to the parking lot at the approach to most of the climbing. It was a far better camping spot, and we found ample place to throw a couple tents up and cook. We planned to wake early and tackle the 1.5 hour approach, but sleep won and we hit snooze. This did not last long, as charging weekend warriors arrived in shiny Audi's and similarly shiny gore-tex clothing, and the sound of tires crunching the gravel and mud just meters from our heads was far from relaxing.

Finally, we were up. Damian had suggested a classic 6 (in Alpine rating), something "easy" for the beginning. 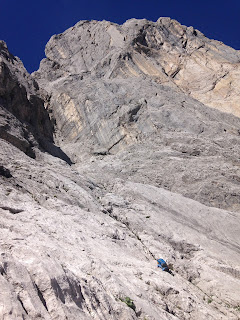 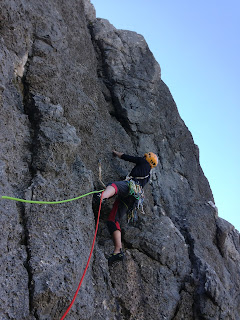 It was a route from two famous sandstone climbers, old and proud. We had no idea what we were in for. Easily the hardest route of that grade I have ever been on, and definitely not a warm up. The hike was brutal for my out of shape self, but once at the base of the climb, we were optimistic. We switched leads every few pitches, and meandered up the wall, only lost a couple of times. I had a terrifying traverse on my lead, after following pitons in a mistaken attempt to go straight up, which then involved down climbing and taking a sharp left. The follow was much worse, as Damian risked a gnarly swing if he fell. On pitch 9 out of 11 the rain hit. 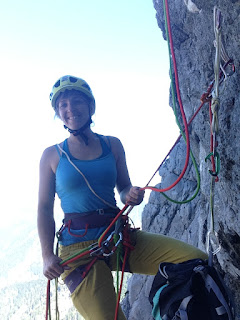 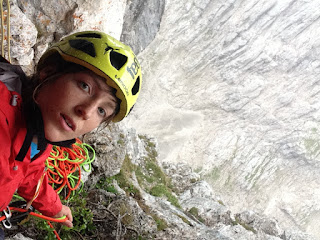 We huddled in a cave and talked bullshit to keep our spirits up and our hearts warm. After an hour Damian ventured out and I belayed him on the easy scramble to the summit. I followed in a cold drizzle. We briefly celebrated at the top, then quickly began searching for the descent. It was a wet and slippery rappel, and we were soaked in minutes. On the last several rappels, we agreed to skip a few with my Tendon 70m twin ropes, which proved to be a terrible idea. Damian had forgotten his rappelling device, and the carabiner trip twisted the ropes into spaghetti. Add them being soaked, and you have ropes that are impossible to pull. We managed to laugh despite the situation, which was both of us hanging on the wall, an unknown distance from the bottom, in the rain, at 11pm, with ropes that would not budge. I fashioned an ascending system with my ATC and a prussic, and slowly ascended three pitches of overhanging rock. At the top, I pulled the ropes and rappelled the proper way, not skipping any anchors. As I came closer to Damian, I could hear him belting out classic rock tunes, and as I lowered over the hump I saw him shivering but smiling. These are the kind of friends you want to get into shit with. Finally, we did the last rappel, reached the path, and hiked the long hour back to the car.

In the morning, more weekend warriors showed up, and tourists going for a hike to the huts, and the quickly imagined us to be strange zoo creatures as we cooked on stoves next to a tiny, old Polish Fiat full of stuff. We were a spectacle. This was clearly not a popular place for dirtbags, and since we knew dirtbags to be a dying species, we dirt bagged hard by our fiat, next to the line of shiny, new VW vans with cozy, new-age clean-bags inside. 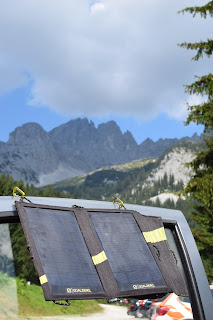 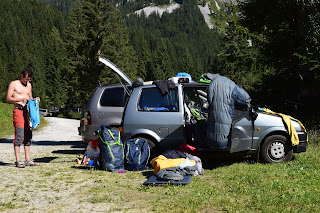 That next mission was a 1000 meter multi pitch classic that had an easy grade. 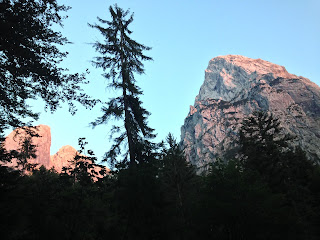 Due to the length, we agreed to sleep at the base. Damian had downloaded the guidebook, all in Austrian German (hard for me to understand with my basic German skills), but due to our last epic I imagined it was pointless to read it since I might not understand any more than Damian. So we I asked if the approach was the same, he said "I think so." We packed our bivy gear and as much food and water as we imagined we would need. Our packs were not light. We started that afternoon, hiked up to a hut, then up to a small pass between peaks, along a via-ferrata to a steep downhill scree field, finally hiking into forest, and eventually reaching a boulder field. We dropped the bags and hiked up to the approximate start of our route, then returned to our campsite. We ate a pre-cooked pasta dinner, which was delicious, then located a couple spots to throw our sleeping mats, avoiding the giant black ants that seemed to control the region. 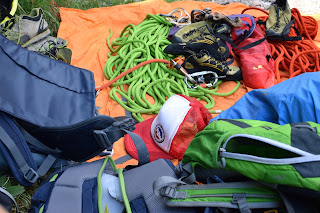 At 5am we set off, and by daybreak we could see two other parties on the wall, what must of surely been our route. We soloed the easy terrain up to them, as two fast guys passed the two goofy guys in front of us. They then informed us that we were all on the wrong route, but everyone had followed each other and therefore we were all in the same mess. We made our first mistake by not passing these fellows right then and there, and we were slowed down for the first half of the route. Luckily the route joined our route, Kleine Halt, and we were eventually on the right way. It was leagues easier than our first day, and we casually enjoyed the moderate climbing, making good time other than licking the heals of the two guys in front of us. Finally towards the top, they let us pass, and we summited in the warm sun, hot in fact. 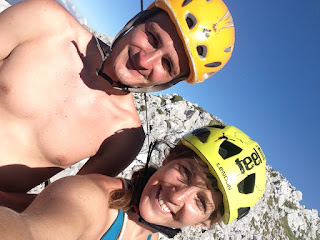 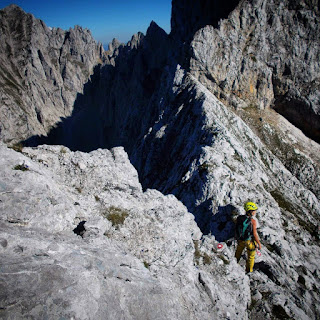 We followed them on the steep descent, eventually getting back to our camp. We had not brought food for another night, so tired and weary, we packed up and began hiking back to the other side of the mountain. At some point during this journey Damian and I had realized we had hiked from the wrong side of the mountain. We could have driven half an hour to a nearby village and hiked for a couple hours, but instead we opted for eight.hours.of.hiking. You win some, you lose some. This turned out to be a marathon. We hiked back up towards the saddle of the Wilder Kaiser, taking a momentary pause at a hut before the upward climb. We sat on the step surrounded by happy, rich hikers and climbers who ate hot meals, drank delicious beers, and would probably sleep in warm beds that night. But, we were a dying species, and this was our plight. We refilled our waters and started again. It was late, the sky was beautiful, and thankfully, there was no rain in sight. The climb to the saddle felt never ending. I became a machine of the mind; ignoring my painful knees, leaning heavily on my Leki trekking poles (lifesavers) and step-by-step tacking each switchback. It appeared we would reach the saddle in the mountain repeatedly, and yet over and over again we would crest the hill only to find another one, dark and shadowy, looming ahead. Damian rambled on about sleeping then and there, but we pushed on, still smiling, possibly because of our stupidity. We could have hiked a couple hours, but here we were hiking, climbing and hiking for 22 hours straight. 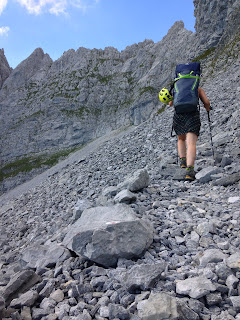 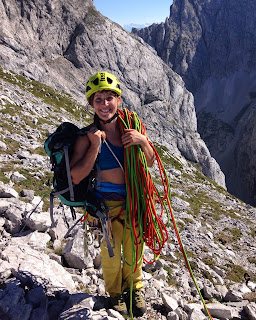 Once we heard the cowbells we knew were on the home stretch. Glowing eyes on either side of us welcomed our weary footsteps as we descended the gravel road, and finally threw our bags at the fiat, exhausted and in disbelief. This might be no feat if you are training for such things, but we were both off the couch in some sense of the term. The next day was definitely a rest day. 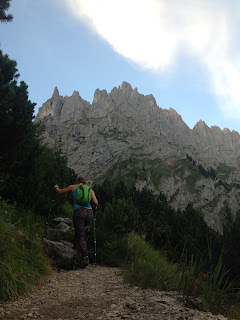 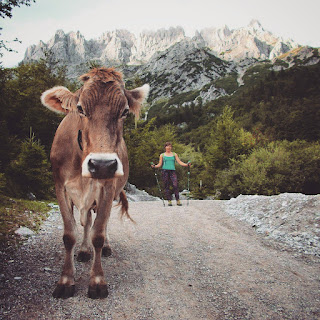